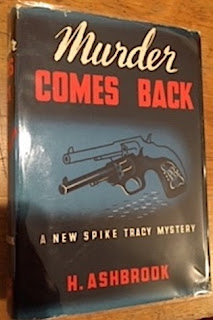 THE STORY: Moira Ballinger, widow of department store millionaire, is found dead in her bedroom shot through the head, apparently self-inflicted. Twenty years earlier her husband supposedly committed suicide in the same manner using the very same monogrammed revolver found in her limp hand. Is it merely a case of eerie déjà vu? Or is it a murder disguised?

CHARACTERS: Initially Murder Comes Back (1940) seems like it will be a run-of-the mill story of greedy relatives clinging tightly to secrets and too easily motivated to kill a vile relative in order to gain their inheritance. Money seems the obvious motive for all those implicated.  But Ashbrook is too clever to resort to tiresome conventions and cliche plot ideas. There are plenty of secrets in the Ballinger household a veritable avalanche of skeletons come tumbling out of multiple closets once Spike Tracy and Inspector Herschman begin questioning the relatives.

The murder investigation gets under way almost immediately with the intrusive presence of Dr. Horatio Pennypacker, a suspicious outspoken family physician who has taken it upon himself to imprison the person he thinks is the obvious murderer. He entrusts the key to a bedroom where he has locked up James Wort, the Ballinger family lawyer. Then Pennypacker enumerates several points about Prentice Ballinger's death and the outrageous coincidences that match up with his wife's recent supposed suicide, the most compelling being that each bedroom was wiped clean of all fingerprints except for those found on the revolver near the hand of each victim. Murder seems a proven fact with that detail in the open. Tracy then adds one more observation to the list of coincidences -- that Dr. Pennypacker was the first person on the scene at each death. That seems to put Pennypacker in his place leaving him quietly seething and shutting his supercilious mouth for the remainder of the chapter.

Tracy will face off with his Irene Adler in this murder case. She is Patsy,  the youngest Ballinger and the only child not even born when her father was killed two decades ago. Patsy seems to be digging through the past and finding bits of evidence that she refuses to share with Tracy.  He curses her in every other chapter calling her all sorts of names but at the same time marveling at her wily intellect and admiring her ability to outwit every policeman sent to keep an eye on her in her lower Manhattan apartment building.

The rest of the family are featured in small vignettes but are almost relegated to the background for the bulk of the novel. Sidney, the older brother, is eager to get an investment partner to renew a promissory note for $100,000 lest his business fall into bankruptcy. His money problems make him a prime suspect. David, the other son,  and his wife Paula live in near squalor thanks to Moira's selfishness. He too needs money and could use the Ballinger millions denied him by his haughty disdainful mother. And then there' s Olivia, affectionately called Ollie by Patsy, who lives in lonely spinsterhood in her isolated third floor apartment in the family mansion. Her only friends seem to be the female servants with whom she frequently goes to the movies. Is she harboring a secret that requires money too? Though the Ballinger sons may not feature prominently and Ollie seems to be present only for window dressing all of them play important parts in the solution of the Ballinger murders.

INNOVATIONS: Ashbrook has constructed a complex plot in which an overlooked crime in the past has led to a swath of violence in the present. Prentice Ballinger’s suicide is clearly a murder as is Moira’s death and both seem to be the work of a single person. But several other murders follow in quick succession, one of them rather shocking. Inspector Herschman and Tracy follow the clues believing that one greedy soul is the culprit. In a brave departure from the conventions of traditional detective fiction Ashbrook has allowed her love of violent murder movies to influence the outcome of her gripping story of violence, blackmail and revenge. There are multiple villains in the piece, few people escape guilt for one reason or another, surprise witnesses appear who don’t know they are witnesses, an intricate cover-up is slowly revealed and a genuine surprise in the final pages of who killed Moira and what happens to that criminal. Ashbrook has broken several time honored rules in Murder Comes Back and I enjoyed it immensely as a subversive murder mystery written that was published well before such books would flood the shelves in the post-WW2 era.

QUOTES: The only kind of big game he’s interested in wears lace step-ins.

I’m the only one who has an ironclad alibi for both cases. […] Twenty years ago when old [Prentice] was popped off, I was in what the poets call the 'primordial darkness of the womb.' 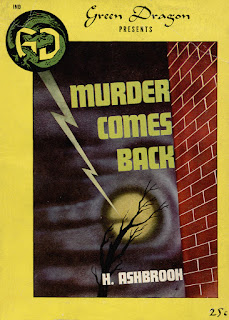 And so Spike told him. All. That was one of Pug’s chief virtues. Telling him All was as safe as pouring it down the kitchen sink.

Her artless, foolish, and malicious chatter had lightened one of the most obscure spots in the case -- the spot between four-thirty and six o’clock on a certain afternoon in the life of the late Moira Ballinger.

A female who figures in a murder investigation, even in a minor capacity, should be a ravishing blonde or a flashing brunette. She should be sinister or of touching innocence. She should be an intriguing vixen or an adorable angel. In the light of these requirements Miss Lillian Gillespie was a bust.

EASY TO FIND?  You can buy an eBook version of Murder Comes Back from an outfit called Black Heath Editions who sell their reissued vintage crime novels via amazon. I've been informed that it is available in the UK, EU and USA as well as India. Good news for a digital edition for a change! Even more exciting news is that Black Heath has remarkably reissued all of Harriette Ashbrook's mystery novels. If you like this one, you can read them all! Luckily for those who prefer original and vintage editions there are still a handful of copies of Murder Comes Back in both hardcover and paperback offered via the usual internet bookselling sites outside of amazon. Only one is priced in the collector’s range. Act now!

TomCat who blogs at Beneath the Stains of Time is reviewing many more of Ashbrook's novels over the next couple of weeks. You can find them all by clicking here.  I'll be reviewing at least one more, The Purple Onion Mystery, the final book in the Spike Tracy series.
Posted by J F Norris at 5:38 PM