FFB: To the Devil -- a Daughter - Dennis Wheatley 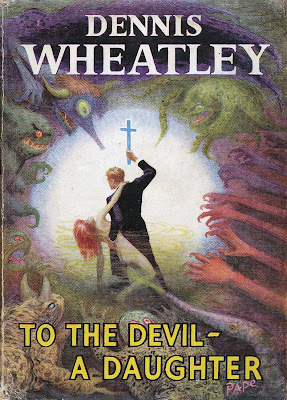 Christina Mordant cannot enter a church without getting ill. The very smell of a chapel is enough to make her nauseated. Animals shy away from her and growl for apparently no reason when she walks by. When night falls her usual polite and timid demeanor gives way to an indulgent and hedonistic personality that is more cruel than kind. What is going on with this young woman who has been abandoned by her father and left to fend for herself in a small house in the south of France?

Long before The Exorcist almost single handedly was responsible for an explosion of suspense novels and thrillers about demonic possession there was To the Devil--a Daughter (1953) Dennis Wheatley's first book to deal with the supernatural phenomenon. He handles the subject matter less luridly than those more familiar books of the 1970s displaying his usual staunch occult beliefs and a detailed look at Black Magic rituals. It's all wrapped up in a fast moving adventure novel that outdoes much of what is found in the pulp magazines of the 30s and 40s.

To the Devil -- a Daughter is one of Wheatley's later novels incorporating his fascination with all things occult. Because it was written in the 1950s the Satanists turn out to be a bunch of dirty Commies not Nazis, his usual target for villainous evil.

Wheatley has a kind of Ann Coulter rant he lets loose early in the book outlining his ideas about all things evil:

Now that more than half the people in the world have become godless, they have also become rudderless. Once they have put away from themselves the idea of the hereafter they think only of their own selfish ends of the moment. That leaves them easy prey to unscrupulous politicians.  Before they know where they are, they find themselves robbed of all personal freedom; their family life, which is their last tie with their better instincts, is broken up, and their children are taken from them, to be educated into robots lacking all individuality. That is what nearly happened in Nazi Germany and what has happened in Russia; and if that is not the state of things that Satan would like to see everywhere, tell me what is?

The story is pretty much a by-the-numbers pursuit adventure story with a smattering of witchcraft and black magic to spice up the usual fist fights, kidnappings and other derring do. Wheatley has a real gift for making the most cliche adventure set piece come alive with genuine excitement and suspense. The scene where Molly Fountain's son John, the over confident hero, manages to get aboard the villain's yacht, subdue a bad guy and make his way to rescue Christina, the imperiled heroine, is a great example of taking the standard potboiler action sequence and enlivening it with character traits that humanize both the good guys and bad guys. John is flawed, not a superman and acts with a trace of guilt always thinking of the consequences of committing murder. (At the time the guillotine was still the death sentence for capital crimes in France.) The bad guys are devilishly smart not stupid. And Canon Copely-Syle, a corrupt clerical figure intent on attaining "Oneness with God," outshines any of the wicked sorcerers and occultists created by Sax Rohmer. Wheatley was probably one of the first writers to take the conventions of pulp thrillers with their over-the-top action and superhuman heroes and make them more believable and realistic.

From the very first sentence ("Molly Fountain was now convinced that a more intriguing mystery than the one she was writing surrounded the solitary occupant of the house next door") the reader knows this is a book that will tell a gripping story. The manner in which Wheatley unveils the secret life of Christina, how thriller writer Molly Fountain slowly puts together the pieces, and the discovery of the mysterious plot behind Christina's strange exile in the French Riviera and her instructions to talk to no one of her past are all masterfully executed. The story is everything here and it is easy to forgive the frequent lapses into ultra-conservative political tirades like the one previously quoted. 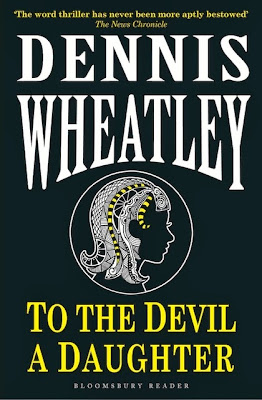 Bloomsbury has purchased the reprint rights for all of Dennis Wheatley's novels. All of them will be available in eBook format with a select few also released in paperback.  The first few have already been released and To the Devil--a Daughter is one of three titles that will be released in both formats. The other paperback editions released this month are The Forbidden Territory (Wheatley's first novel) and the classic black magic thriller and one of Wheatley's truly excellent books The Devil Rides Out. Click here to read more about Bloomsbury's Dennis Wheatley reprints in both paperback and digital editions.

A movie version (very loosely adapted) of To the Devil--a Daughter was done in 1976. It was the last of Hammer Horror movies and starred veteran Hammer actor Christopher Lee as an excommunicated priest bent on world domination. It's nothing at all like the book and Wheatley hated it. He even called it obscene! Now that's strong criticism coming from a secret sadist.
Posted by J F Norris at 2:16 PM