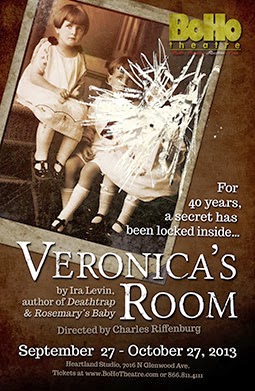 Just a few days ago I learned of a local production of Veronica's Room by Ira Levin and it received rave reviews from all the Chicago newspapers plus a few theater blogs.  So I had to see it.  I had read it many years ago and never seen a production and have always wanted to.  A perfect creepy night out just a week before Halloween. Did it live up to all the raves? Well, yes and no.

A college age student named Susan Kerner is cajoled into impersonating a long dead girl named Veronica in order to appease an older couple who are taking care of a dying woman named Cissy.  As her dying wish Cissy longs to see Veronica, who she believes to still be alive, so she can finally put to rest her fear that Veronica died angry over some sins of the past.  Susan thinks it'll be fun and sees it also as the act of a Good Samaritan.  No harm could possibly come from such a charade that has at its heart good intentions.  Well, that's what she thinks.  The charade starts to veer into the fearful when moments after agreeing to the impersonation she is locked in Veronica's room and left alone for a very long time.

From then on the play strays into a strange and surreal world of make believe and time travel. Has Susan lost her mind?  Is she the genuinely crazy one?  Or is she the victim of an elaborate mind game engineered by two insane servants?  What did Veronica really do?  Is she still alive?  All questions are answered as the plot is slowly unveiled and the architects of the nightmare step out of their roles to reveal their true selves and, more importantly, their deeply twisted secrets.

From the reviews I read I was expecting something truly frightening.  But the production falls short of all the hyperbolic praise.  In the lead role of the terrorized and terrified Young Girl Amanda Jay Long does a convincing job of the woman in peril. You feel for her plight. The scene when she realizes what she must do in order to escape her nightmare packs an emotional wallop. She does an enviable job of getting the audience to feel her imprisonment. The intimacy of the theater itself adds to a atmosphere of claustrophobia and entrapment.  Long is making her Chicago debut in this production and she is certainly one young actress I'll be looking out for in the future. She has a range of emotion and talent on display here though she's still a little raw. 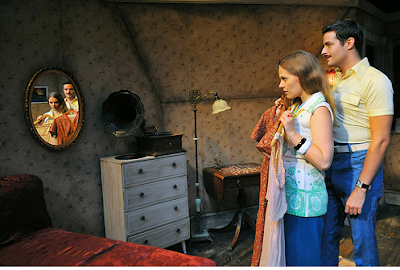 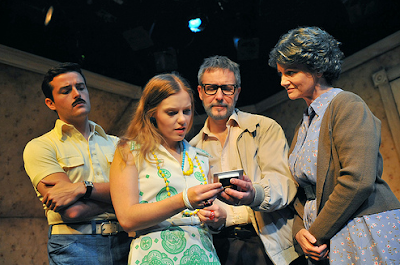 The bravura performance I would single out is that of Sarah Wellington (above, extreme right) in the role of the Old Woman.  Over the course of the eighty minutes Wellington plays four different parts, is the only actor who masters all the accent and regionalisms the script calls upon her to replicate, and is a powerhouse of strength, determination and eventually madness.

Reading Veronica's Room just doesn't compare to seeing it performed. Theater and role playing are such an integral part of the drama that a performance is truly the only way one can appreciate this deliciously devilish and perverted little thriller.  If you live in Chicago I recommend it for a creepy evening out during this Halloween season. Just don't believe all the hype. It'll give you a chill or two,  but you won't be scared out of your wits.

Veronica's Room plays through October 27 at the Heartland Studio (a tiny little storefront theater with a very intimate performance space) just north of Lunt on Glenwood Avenue.  It's a short two minute walk from the Morse Red Line stop.  The play was produced by Boho Theater Ensemble.
Posted by J F Norris at 10:32 PM