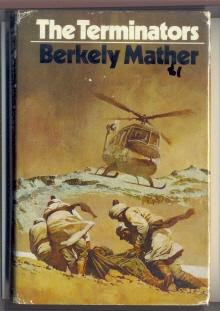 Eleven years after his first appearance in The Pass Beyond Kashmir Idwal Rees is teamed up once more with his bloodthirsty and belligerent Pathan cohort Samaraz in a tale of espionage and derring-do that only Berkely Mather could have written. This time the duo face a band of marauding Tibetan nomads while on the hunt for a missing spy. Oddly enough that spy turns out to be Mather's second series character -- James Wainwright, a hapless and insecure British agent who appeared solo in two previous books by Mather.

The Terminators (1971) begins with a hijacking sequence that is eerily resonant in its detail of airport security systems. I remember the skyjacking paranoia of the 1970s that was largely responsible for the installation of metal detectors throughout the airports of the world but the way the hijackers manage to sneak weapons on board in this novel will be all too familiar to any modern traveller. Once again Mather creates some eyebrow raising scenes that predict criminal behavior yet to come in the real world. The hijacking plants the seed for the hair rising climax that takes place in the final third of the book. Once the prologue is done the story focuses on Rees and Samaraz and their assignments for a covert British secret service agency known as "the Firm".

And for those who are familiar with Rees in his first outing The Terminators will seem like a regular homecoming of characters. In the first recounted escapade of many engaging action scenes the corrupt Indian police office Nadkarni and his Sikh colleague appear briefly only to fall victim to a brutal attack. When Rees receives his assignment to track down Wainwright he learns he will have to travel to the home of the blind General Culverton, father to his old flame Claire, a nurse at the Tibetan refugee hospital. He will also learn that Wainwright and Claire have struck up a relationship that will serve as fuel for a rivalry between the two men. This portion of the book -- a long bickering/arguing sequence -- is the only time where my interest in the story flagged. I could have done without Wainwright's petulance, the juvenile name calling, and his "I'm such a loser" attitude as well. He does, however, step up to the plate in a final heroic act in which he proves himself to be not as self-serving as he at first painted himself.

Mather's unusual sense of humor comes into play throughout the book. We get a variety of awful insults, some translated literally and some left to our imagination, from the foul-mouthed and ill-tempered bigot Samaraz. The humor is a mix of the salty, the vulgar and the oddball. Here are two of my favorites:


...he had about as much chance of pinching my woman as he had of shoving butter up a wildcat's arse with a red hat pin.

What I know about radio, plus a nickel, wouldn't buy the ghost of Gandhi a haircut. 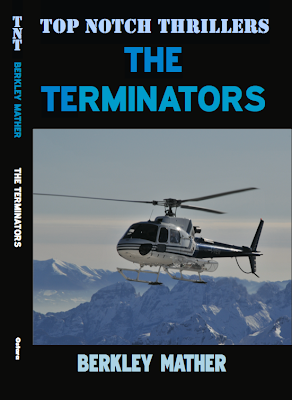 Best not to reveal all the excellent adventure delivered at the hands of this master storyteller. Mather really should have turned to the movie screen more often in his writing career. This book as the other two I have previously reviewed here is both a cinematic wonder of action, an Asian travelogue and a crash course in Indian/Tibetan/Pakistani relations and politics. If you haven't discovered Berkely Mather yet -- what are you waiting for?

The Terminators is now available as part of the library of Top Notch Thrillers, that fine imprint from Ostara Publishing. You can order direct from them (click on the link) or amazon.com (both US and UK versions). Do yourself a favor and introduce yourself to Idwal and crew soon. You won't be disappointed.

Previously discussed on this blog:
The Pass Beyond Kashmir (also available from Top Notch Thrillers)
The Gold of Malabar