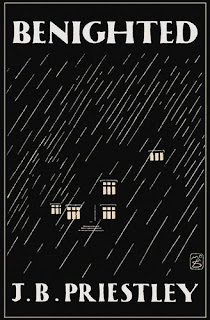 A torrential rainstorm, roads impassable due to flooding and mudslides, a temperamental car and three terrified travellers trapped by the storm. Reminds you of news headlines of the awful weather destroying the Midwest and the East Coast, doesn't it?  It's also the opening of Benighted (1928), J. B. Priestley's second novel and the basis for the classic film The Old Dark House.  But there's more to this story than just a group of stranded strangers forced to stay in a spooky house assailed by the elements and lorded over by creepy occupants. The bulk of the novel is devoted to existential and philosophical conversations, something most readers will not be prepared for.  By the end the entire novel seems to be a kind of strange and eerie allegory about facing one's fears and finding purpose in life.

Philip and Margaret Waverton, along with their ne'er-do-well friend Roger Penderel are on their way to Shrewsbury when they are forced to seek shelter due to a storm of apocalyptic proportions.  Huge chinks of the hillside come tumbling into the roadway, the earth literally trembles and shakes, torrents of water are flooding the roads and nearly wash their car off a cliffside.  The opening scene is every bit of what classic film fans may recall of James Whale's screen version of the book. But after meeting the brutish and mute manservant Morgan and the eccentric Femm family the travellers settle in for a long night by discussing the meaning of a life and sharing stories from their past. The bickering Wavertons and cynical Penderal are later joined by Sir William Porterhouse and his companion Gladys Du Cane, an ex-showgirl.

Oddly, for three quarters of the story it seems as if nothing really happens but bad weather and lots of talk. The dialogue is a mix of Gothic intimations and highbrow philosophizing.  Horace and Rebecca Femm, a very creepy couple of siblings, drop hints about their invalid brother confined to an upstairs bedroom and refer to another area off limits in the house. They warn the guests to steer clear of Morgan, keep him away from the alcohol lest he get into one of his frequent drunken rages. With these comforting thoughts they exit and allow their guests to settle in until the storm abates.  It's no wonder Penderel starts a conversation game along the lines of "Truth or Dare "to keep everyone distracted and their minds off the possible dangers that lie in wait in the house. With the storm so relentless in its onslaught, it's as if they are waiting for the end of the world. Why not talk, smoke and drink if the end is nigh anyway?

Then the electricity fails and the guests are plunged into a darkness that is both literal and figurative.  Simple tasks take on extraordinary dimension. The importance of keeping candles lit and rationing out matches are like acts of survival. A scene in which characters must decide who will make a dreaded journey to the top of a staircase to retrieve a lantern becomes an arduous and frightful odyssey:

He crept up,slowly, shakily, his shadow leaping and sprawling before him. There were little noises everywhere now, not a stair in the house without its creak. All that part of the house that yawned above him seemed tense, expectant. The little patch of darkness at the top was thick and crawling with unrevealed terrors. A step or two more and out of that blackness would spring a white gibbering face. He had a dream like that once -- it all came back to him, raw and palpitating... 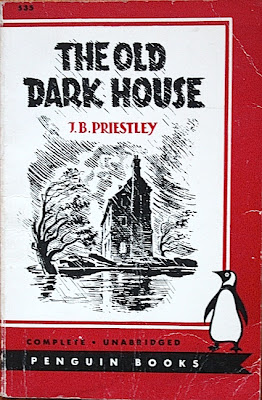 When Philip and Margaret finally penetrate the bed chamber of the elderly Sir Roderick they learn of a secret within the house that threatens them all with destruction. It is at this point that the novel suddenly reaches a fever pitch of fearfulness and utter doom. The guests having been plunged into a world of darkness and dread now must literally fight for their lives. The mood is intense, surreal and often terrifying. The search for light, the obsession of locked rooms and keeping track of who has which key, the repeated talk of the dark are not just used as tropes of the Gothic genre but rather become transcendent metaphors. The climax delivers a few unexpected shocks and moments of true terror fairly free of excessive melodrama or histrionics. After all the anticipation of hidden danger and potential violence Priestley unleashes the beasts and gets his desired effect.

Benighted is one of the many reprint editions offered from Valancourt Books and is available from the usual online bookselling sites.  Dare to spend an evening in the Femm house with this motley crew.  I guarantee a frisson or two during your stay.
Posted by J F Norris at 12:06 AM