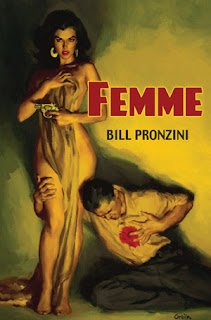 Femme (2012) is one of two Nameless Detective novellas recently published by Cemetery Dance, an independent press known primarily for horror novels. It's a throwback for Pronzini to the days of the Gold Medal paperback original. Nameless meets his match in a woman who might have been appeared in any of the number of dark crime and noir novels that were the specialty of Day Keene, Bruno Fischer, and especially Gil Brewer. Pronzini has mentioned in 1001 Midnights that The Vengeful Virgin is his favorite of Brewer's books and I can see that wicked Cory Beckett might easily have been inspired by Brewer's legion of bad women who'll do anything to get what they want.

The plot is a basic find-the-man plot with Nameless hired to track down Cory's brother Kenneth who is on the lam from a robbery. As the story progresses Nameless soon learns that Cory is far from the decorous client and loving sister. She has an ulterior motive for finding Kenneth and Nameless is sure it has to do with money. But Cory wants more than just money.

For those who like their woman characters in crime fiction mean and nasty you get more bang for your buck in Cory Beckett than any other bad girl in the genre. She outdoes Phyllis Dietrichson, Cora Papadopoulos and Julie Bailey and a dozen others whose names may not so recognizable. And the final twist disparaged by some other blog reviewers I thought to be the perfect icing on this frigid monster. This is no book for feminists that's for sure. But for a quick dip into the depths of the darkest of noir you can do no better.

This was my brief contribution to a blog celebration for Grand Master Bill Pronzini who turns 70 today. I'm on the road headed home from the French Quarter Jazz Festival in New Orleans. I promised something and this may be short and sweet, but it's a review of a neat little book that I think lives up to, and in some ways surpasses, the kind of noir novel I love from the past.