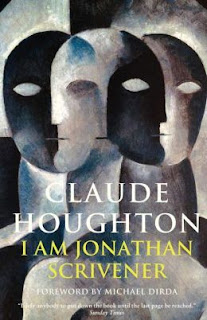 I Am Jonathan Scrivener (1930) is the fourth novel by Claude Houghton, a talented, sometimes visionary, and much forgotten writer, who in his time was acclaimed by Hugh Walpole and P.G. Wodehouse. Later other notables such as Henry Miller and Graham Greene would join the circle of those singing the praises of the cult of Houghton. In a long career of writing novels and stories that blended metaphysical philosophy with the tropes of crime and supernatural fiction I Am Jonathan Scrivener is considered to be Houghton's masterpiece. While I did not find it to be wholly ingenious there is enough in the novel to recommend it as a work of insightful observations on loneliness and friendship, also as a genre novel that foreshadows contemporary paranoid thrillers of identity and betrayal.

The basic story sounds familiar to anyone well read in crime and detective fiction of the early 20th century. James Wrexham, after a period of dreary employment in a lawyer's office and a self-imposed solitary life with no real friendships, comes across a newspaper advertisement for a secretary and library cataloguer. He submits a rushed letter the content of which he later cannot recall and is surprised when he is offered the position outright with no interview and never having met his future employer. I can think of a least four other detective novels which begin exactly this way even to the point of the library cataloguing. There are also numerous stories and novels employing the gimmick of the cryptic newspaper advertisement that leads to a whirlwind of unexpected adventures and nefarious plots (Suspense by Isabel Ostrander and "The Red Headed League" come immediately to mind).  But Houghton uses this advertisement gimmick only as a springboard from which to launch a story that deviates from any expected traditional mystery novel or tale of intrigue. 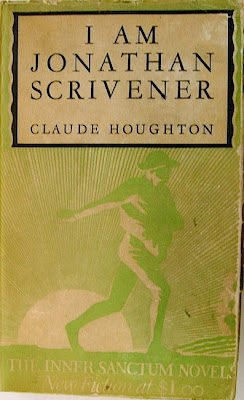 There are many mysteries that Wrexham faces in his new position. Why was he chosen? Why did Scrivener leave for Paris so abruptly? Why allow Wrexham complete access to Scrivener's house, his tailor, his friends? Is there some sort of ulterior motive in having the library catalogued? But soon these  questions become less mysterious than the man himself. The story shifts into a metaphysical mystery about identity. For as Wrexham soon learns from a variety of friends and associates Jonathan Scrivener seems to be a man of multiple personalities. He is described as a perverse degenerate, a hedonistic adventurer, a misogynous and bitter misanthrope, a lighthearted and witty raconteur, a failed actor, brilliant artist who never reached his potential and so much more. Can he really be all of these at once? Or is he just a fraud? No one seems to really know who or what Jonathan Scrivener truly is. But Wrexham is determined to discover the real man among his many guises.

Wrexham finds himself less a secretary and bibliographer and more of an accidental host to Scrivener's endless stream of guests. Two women even have latchkeys and drop in whenever their whimsy sees fit. The library, a place formerly forbidden to any of Scrivener's friends, becomes a salon for all the visitors and serves as the connecting point between Wrexham, the friends and the absent Scrivener. The books themselves (the cataloguing project is soon abandoned) become the subject of many discussions and reveal even more of the secrets and darkness that Scrivener kept hidden from his friends. Eventually Wrexham will join forces with Francesca Bellamy, a celebrity figure who has achieved notoriety through the highly publicized suicide of her husband, and together they will seek out the mystery of Jonathan Scrivener. Mrs. Bellamy is sure that Wrexham and all the others are the subjects of an experiment, a cruel mind game begun by Scrivener from afar, and that he is perhaps observing them all somehow without their knowledge.

The book is not all sinister musings and melodramatic character revelations. Much to my surprise there were several scenes of absurd humor that came as an unexpected bonus. Wrexham meets the devil-may-care playboy Antony Rivers who takes hims to a Japanese restaurant. The variety of strange foods Wrexham is served is described with grotesque metaphors like a soup that "had long weeds in it which looked rather like serpents who had died in youth" and that "tasted exactly like the old Aquarium at Brighton used to smell." Later Wrexham reports on an argument between a bus passenger and bus driver over the difference of one penny in the fare which reaches a ridiculous conclusion.

As the story progresses Houghton has a tendency towards reiteration. He manages to find multiple ways to express his themes, but by the final chapter this reader was weary of them. The interactions between the characters enliven the novel while Wrexham's solo philosophical pontificating tends to drag the novel out of the realm of a novelist into the world of a pamphleteer. Admittedly, there is a suspenseful build-up and Houghton is often eloquent in his speechifying. Wrexham experiences several epiphanies, but due to the repetition the payoff is somewhat anticlimactic.

Sharp readers may catch on much sooner than Wrexham or the others as to Scrivener's exact intentions. The title coupled with a passing reference to Dr. Jekyll and Mr Hyde may lead some to jump to conclusions about the solution of the core mystery.  Houghton, however, has something less sensational in mind.

For decades I Am Jonathan Scrivener had a history of being a scarce book elusive even to the most assiduous of book hunters. Thankfully, the difficult searches are at an end. Curious readers eager to enter the strange world of Claude Houghton can now purchase an affordable paperback reprint from Valancourt Books. Perhaps the cult of Houghton will rise again.
Posted by J F Norris at 12:00 AM