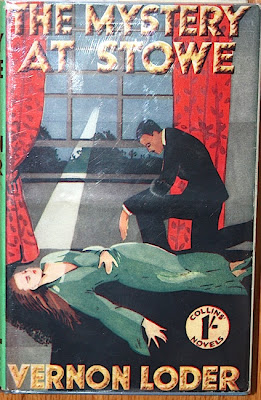 Let's talk darts, gang. Poison darts, that is. And blowguns. Not exactly the most convenient way to do in your enemy. Cumbersome to carry. No element of surprise in the attack. Imagine whipping out a blowgun that has been cleverly stowed down your sleeve or, perhaps if your agile and flexible, down your trouser leg. The minute it's out your victim is sure to hit the pavement and run for his life. And how far does that blowgun poison dart have to travel? No real range, is there? Even the most healthy of respiratory systems and an exhale of hurricane strength isn't going to get that dart to travel more than the length of your average Golden Age drawing room.

Why then is a blowgun employed so regularly in old movies and vintage detective fiction? For the artistry of it all, I guess. You have to admit it's one of the most ostentatious ways to dispatch your enemy. Sure to make the tabloid headlines and maybe even the front pages of the legitimate press.

Poor Margery Tollard is the victim of a poison dart in The Mystery at Stowe (1928) by Vernon Loder. And it looks like Elaine Gordon, renowned South American explorer and travel lecturer, may be the guilty one with the strong lungs. Artifacts recently purchased from Elaine by Mr. Barley, host of a dinner party at Stowe, have been prominently displayed in the front hall. One of the darts foolishly left out in the open is missing from the small container hung beside the pipe. It ended up in Margery's neck and her body was found in front of an open window in her bedroom. Who is the killer with the flair for artistry and ostentation?

The murder investigation is handled mostly by Jim Carton in collaboration with local police. Recently returned from Africa, Carton had been charged there with some police work. He learned how to read tracks in the dust, look for signs of broken twigs, and other "bushman techniques" necessary for a detective in an undeveloped wild region. Carton puts his African skills to use and does some impressive work going over the grounds outside Stowe. He and the police also discuss the possibility of the blowgun as a red herring a la Christie's Death in the Air (written seven years later). Then Carton's imagination gets the better of him and he starts dreaming up ways that a poison dart can be fired without the use of a blowgun. From an air rifle, for example. Now if only he can find one somewhere around Stowe. Maybe that shifty Jorkins has one, muses Carton. Jorkins, the gamekeeper, was outside at the time of the murder and claimed to see a woman in a nightgown in Margery's room. Trying to implicate Elaine that's what he's trying to do that shifty Jorkins.
﻿
﻿Why is Jim Carton so determined to hang the crime on Jorkins and why such a baroque murder method? Because he's in love with Elaine, you silly reader. He must clear her name and win her heart at all at once. At times Carton is more interested in getting Elaine eliminated as the prime suspect rather than uncovering the truth. But this is a detective novel written in the 1920s. What else did you expect?

I enjoyed this book immensely. It was preposterous and entertaining and often witty. A sense of humor in these kinds of detective novels is essential. The opening scene was enough to keep me reading. Two women are playing a competitive game of billiards and gossiping about Ned Tollard, Elaine, and Ned's neglected wife Margery. You just know from their dishy talk that one of those three people is going to end up dead. They paint a picture of Elaine as a femme fatale of the worse kind, Margery as a downtrodden wife, and Ned as a dashing virile man who would set any woman's libido afire. 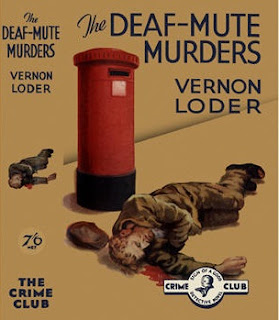 This year I've been focusing on detective fiction written between 1927 and 1931. This first mystery novel by Vernon Loder, a completely forgotten British writer who was nonetheless incredibly prolific, is one of the best I've read in a long time. The creativity invested in the plot, the many possible ways the crime could've been committed, Jim Carton's inventive experiments using one of the women as his accomplice, a gimmick that calls to mind a very famous Ellery Queen novel (also written much later than this book), and the truly surprising -- borderline genius yet utterly insane -- solution all qualify as criteria for a book I'd love to see back in print.

More Vernon Loder books will be reviewed in the coming months. Only a few of his books were published in both the UK and the US with the majority of them receiving only UK publication. And yes, I fear I must report that most of his books are hard to find. His bibliography is far too long to post here. For a complete list of his many pseudonyms and all of his mystery novels which I have painstakingly verified and arranged in order by each correct pseudonym, please visit the Vernon Loder page at the Golden Age of Detection wiki.

READING CHALLENGE UPDATE: Halfway done with my basic requirement for the  "Vintage Mystery Reading Challenge 2013 - Scattergories" sponsored by Bev at My Reader's Block. The book fulfills the category Scene of the Crime. Previous reviews for the challenge are listed below:

Murder is Academic: Murder from the Grave by Will Levinrew
Colorful Crime: The Woman in Purple Pajamas by Willis Kent
Jolly Old England: Murder in Blue by Clifford Witting
Posted by J F Norris at 11:36 AM