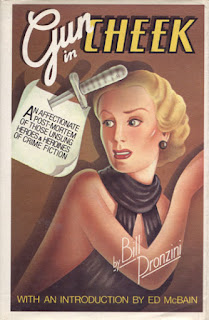 The “alternative classic” is a term Bill Pronzini created when he wrote Gun in Cheek and Son of Gun in Cheek, two entertaining and enlightening books about those hair-brained detective and mystery novels with loopy plots and even loopier writing. Pronzini loves them. And so do I …to a point. Before I had even heard of Pronzini’s books or heard of the term I had stumbled across more than my fair share of alternative classics. The Case of Mr. Cassidy by William Targ, The Palgrave Mummy by Florence M. Pettee, and Murder on the Palisades by Will Levinrew are three outrageous examples of the kind of book discerning readers of crime fiction now call alternative classics. They may be bad, but we love them all the more because of their very badness. Ludicrous plots, wacky detective work, far-fetched murder methods, and some atrocious writing are all in great supply in each one of those books. I read them years before I learned they all ended up both celebrated and disparaged in one or the other of Pronzini’s books. Some writers are even lucky enough (if lucky is the right word) to get an entire chapter to themselves in the Gun in Cheek books. Such a lucky one is Michael Avallone.

I managed to acquire five of Avallone’s private eye novels featuring Ed Noon in my various book store hunts this year. After decades of looking for them they all started turning up with increasing frequency and all at very affordable prices. Last week I finally sat down to read one and after debating whether to go with the very first one (The Tall Dolores) or one that Pronzini wrote about with great affection (The Crazy Mixed-Up Corpse) or the one with the strangest cover (The Voodoo Murders) I finally settled on choosing the one with the most intriguing and appealing story - The Spitting Image. It also happens to employ one of my favorite overused detective novel tropes – twins – and I wanted to see what Avallone did with that. As it turned out this was perhaps the best book to start my Avallone initiation. It turned out to have a wild plot with a surprise ending that blew me away. I should’ve seen it coming miles ahead of the reveal, but I didn’t. I loved that. 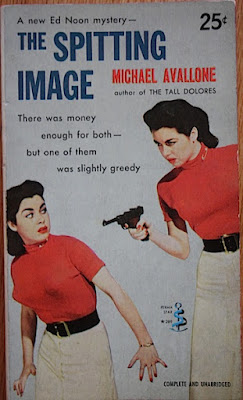 The Spitting Image (1953) is the second Ed Noon novel and tells the story of April and June Wexler, twin sisters who both fear the other is planning to do her in. There’s a convoluted will (a la Harry Stephen Keeler) that their wealthy oil tycoon father drew up stating if by the date of their twenty-first birthday one of the twins dies, the other will inherit his two million dollar estate. If both survive, none will inherit anything and the estate goes to a charity. Was there ever a more inviting incentive for a murder to take place? Prior to the novel's opening chapter three attempts were made on June Wexler and she tries to hire Noon to protect her and put a stop her murderous sister’s plot. When a chandelier comes crashing from the ceiling nearly killing both girls Noon is not sure which woman is the intended target. Then April secretly tries to hire Noon as her bodyguard until her birthday which is quickly approaching. A movie star handsome lawyer, his thug of a male secretary, and couple of goons from Central Casting all figure into the storyline as well.

One surprise that didn’t impress me at all was Avallone’s depiction of the handsome lawyer. Just as Sax Rohmer created eerily “feminine” looking men and turned them into some of his best villains implying along the way things about their sexuality and planning a grisly end for him, Avallone creates a gorgeous man and goes out of his way to talk about the eerie handsomeness of the character and how it makes Noon extremely uncomfortable. The lawyer is gay, of course, and will turn out to be something of a crook as well. Think he’ll suffer a gruesome death? Of course he will. This kind of thing was pretty much standard for the period. Evil homosexuals who break the law, treat women indifferently or cruelly, and do other reprehensible things like speaking grammatically perfect English must all suffer nasty violent deaths. It shouldn’t bother me these days, but it still does.

Pronzini writes in Son of Gun in Cheek of how Avallone liked to insert his conservative social and political beliefs into his books. The loathsomeness displayed for the lawyer is one of Avallone's more subtle early examples. Apparently he gets more and more right wing in the later books when Ed Noon ceases to be the typical flatfoot and more of a secret agent for the federal government fighting Commies, fags and all other threats to the American Way.  I wonder if lesbians turn up in Avallone’s books. Usually they are treated just as shabbily during the heyday of the paperback original, but also in a sexually prurient and titillating manner.

I almost forget the best part of these books - Avallone’s writing. Let me close with some choice examples of his mastery of the silly simile and other metaphorical wonders: 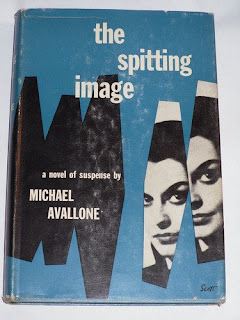 She came into my office like the first five bars of "Tiger Rag."
She sat down with an effort, crossing a pair of silken legs that were strictly weapons to be used on men.
A volcano was going on inside her and the bubbles were erupting like hot lava.
The floor around him was a pool of vermilion. Like the Red Sea. I'm not being funny. Just descriptive.
His eyebrows rose like a fast elevator.
Randall Crandall. That wasn't a name. It was a voice impediment.
Crandall's nostrils nearly rose in disgust.
I had a headache. A musical headache. All of the scoring was by Max Steiner with just enough Stan Kenton noisy brass section thrown in to keep my skull in an uproar.
This is a good book to start with Avallone even if you read only one.  It has all his hallmarks: goofy writing, nutty characters, loopy story with a surprise twist worthy of some of the great of the Golden Age. I'm looking forward to reading the rest of the Ed Noon books I own. I've even ordered one of Avallone's Gothic suspense novels written under a clever pseudonym that's more of an inside joke - "Edwina Noone."

More on Ed Noon here and an excellent remembrance on Michael Avallone here.  Both posts include bibliographies.
Posted by J F Norris at 12:55 PM