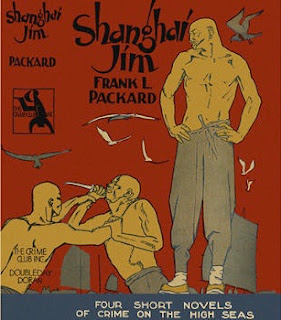 Today is Friday's Forgotten Books Salute to Canada.  Our guest host for this Black Friday is the ever resourceful Todd Mason. The links for today's other posts are at his blog Sweet Feedom.  Check them out for other (I'm sure) more recent and contemporary writers from Canada.  I had to go with one of the most neglected Canadian writers of crime fiction from the past century.

Although Frank L Packard was born and raised in Montreal, attended McGill University, and worked for years for the Canadian Pacific Railway as a civil engineer he tended to write about the dirty underworld of New York crime or exotic adventure tales set in the South Pacific and Asia like those found in Shanghai Jim (1928). Rarely do you find anything about his books on the internet and so I dove right into his books of which I had amassed quite a few.

Packard's first novels dealt with the redemption of the criminal world.  The Miracle Man (1914) tells of the Patriarch, a healer who has a run in with some con men and the surprise healing of a cripple boy that transforms the lives of the crooks trying to fleece the town. The book was adapted into a stage play and later was a high grossing silent film with Lon Chaney in the role of a contortionist who stuns the town by crawling up the aisle in extreme pain and then after receiving the Patriarch's healing touch unfolds his twisted limbs and walks away apparently cured. Similarly, in The Sin That Was His (1917) a crook falsely accused of a murder disguises himself as a priest in order to escape the police, but in living out his second disguised life undergoes a spiritual and moral change. 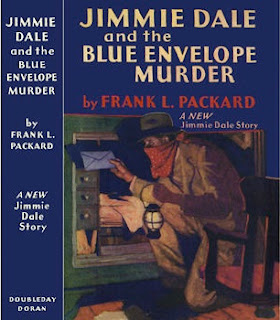 Probably his best known character is Jimmie Dale, aka "the Gray Seal," one of many in a long line of gentleman thief characters. Jimmie Dale also shows signs of the hero pulp characters with his secret hideaway, masked costume, calling cards stamped with the figure of a seal. I saw a lot of similarities to Herman Landon's Gray Phantom who is also a devil-may-care playboy who enjoys masquerading as a crime fighter and both use multiple identities. The Gray Phantom stories appeared serially in the pulps as did the Jimmie Dale stories but Packard's character came long before making his debut in 1914 while Landon's Gray Phantom appeared in 1920. While Packard may have borrowed from Raffles, Arsene Lupin, and other similar characters of the late Edwardian period in creating his own version of the gentleman thief who fights crime there can be no doubt that in Jimmie Dale we see the origin of the hero pulp characters culminating in The Shadow, The Spider, and even Batman. For an excellent overview of Jimmie Dale see this article by David Vineyard at Mystery*File.

One of the most interesting of the Gray Seal books is Jimmie Dale and the Blue Envelope Murder. Herbert Carruthers, the newspaper editor who knows nothing of Dale's secret identity, delivers to Jimmie Dale the news that the Gray Seal is dead.

A good example of Packard's exotic adventure novel is The Locked Book which begins aboard a merchant vessel sailing through the Malay Archipelago. After surviving an attack by savage pirates led by a white man wearing a crimson sash, Kenneth Wayne vows revenge on those who killed his father, Old Man Wayne, the skipper of the Waratan. Kenneth makes his way to a hotel run by the mysterious M. Fouché and passes himself off as a mining prospector. He succeeds in getting a local guide, a boat and heads off in search of the pirates pretending all the while to be a man looking for gold. Instead he comes across a shrine where an ancient book is being guarded as if it were a god. It's even given a name that sounds like a deity: Itu Konchi-Kan Kitab, which apparently merely means "the book that is locked." The book bound in an ornate stamped dragon that is swallowing its tongue is said to hold the key to a buried treasure of the Rajah Kana-ee-aa. But a native frightened by Kenneth's desecration of the shrine takes the book out of his hands before he can open it and flees in the jungle. Kenneth's vengeance takes a back seat to his interest in the book and the story becomes a mix of chase and intrigue as he attempts to recover the book and discover if it holds the secret to the treasure. 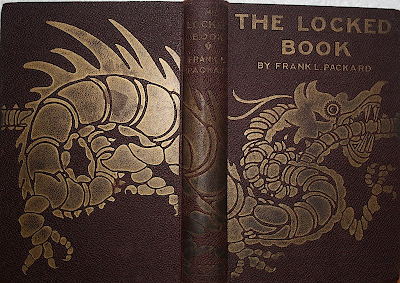 Part of the fun of reading this adventure tale is that the book itself is a replica of the locked book in the story. Shown above is the Copp, Clark Company 1st Canadian edition with the ornate gilt embossed dragon grasping his tail in his mouth. When the book is closed it gives the impression that it too is locked like the book guarded by the natives.

Whether he is writing about gangsters and their molls, crooked antiquarians seeking rare books with hidden secrets, sailors and merchant seamen battling marauding pirates in the South Seas, or Jimmie Dale and crew in the New York underworld, Frank L. Packard was instrumental in the development of crime fiction that shied away from amateur sleuths and focused on the darker and dirtier world that would explode into the violent writing of hard-boiled writers like Carroll John Daly and Dashiell Hammett.