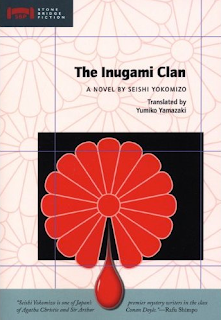 My knowledge of Japanese detective novel is limited, but if I am to believe what is written on the jacket blurbs of every Japanese mystery novel translated into English, then every Japanese mystery writer is a bestselling and extremely popular author in their homeland, a claim that seems farfetched. I have read the strange stories of Edogawa Rampo ("considered the dean of modern Japanese mystery writers") and a handful of novels by Shizuko Natsuki (dubbed "the Agatha Christie of Japan" on one of my books) who are supposed to be bestsellers. I have also read The Tattoo Murder Case ("among the most read of Japanese detective mysteries") and The Tokyo Zodiac Murders ("still one of the best selling mystery novels in Japan") by two more popular authors and two excellent spins on the locked room/impossible crime subgenre. One week ago through sheer luck I found a copy of The Inugami Clan, a book that is not only written by a best selling author, but is touted as a classic in Japanese detective fiction and the most popular title of the author’s 80 plus books. For once I agree with all the hyperbole on the jacket blurb. This is one Japanese detective novel that all devotees of the Golden Age ought to seek out. I would dare to call it iconic in the mystery and crime fiction of Japan.

The author, Seishi Yokomizo, began writing detective fiction in the late 1940s. The Inugami Clan is his tenth book and was originally published serially between 1950-1951. The story itself is set in 1949 with post-World War 2 Japan fueling a major aspect of the plot. His detective Kosuke Kindaichi is practically an icon in Japanese popular culture having appeared in the movies, TV and graphic novels. The Inugami Clan was filmed twice (1976 and 2006), both times by renowned director Kon Ichikawa.  So popular was Yokomizo's detective that a spin-off character was created who is purportedly the grandson of Kindaichi. I went to YouTube and watched countless video clips from a long running TV series about Kindaichi -- none of it dubbed, all of it completely incomprehensible to me, yet fascinating all the same since I was by then familiar with the character of Kindaichi. I even watched a trailer for a video game version of The Inugami Clan which visually I did understand even if I couldn’t read any of the Japanese phrases being flashed across the screen. The illustrations and characters depicted in that video game trailer accurately and vividly depict what I read in this fascinating and grotesque mystery novel.

Based on the other books I have read (most published in the 1970s) it appears that Seishi Yokomizo truly is the forefather of the modern Japanese detective novel. On display are all of the characteristics that you will find in any Japanese crime novel from the 1940s and onward: an intricate plot that is fairly clued, grotesque murders, family secrets, disguised individuals, false identities, an eccentric detective with wily methods, and efficient policemen clever in their own right but easily baffled by the fantastic elements that accompany the crimes. The Inugami Clan is rife with the bizarre and the grotesque, has a smattering of Japanese lore and culture, and shows more than a few nods to the detective novel tropes so well known to Western readers. The opening scenes, for example, are reminiscent of Peril at End House with a young woman who tells Kindaichi that she barely escaped three outrageous attempts on her life. Yet in its essence the novel is utterly Japanese. The motives of one of the characters make perfect sense in Japanese culture though would strain credulity in a mystery written by a European or North American.

The basic plot is familiar to any devotee of golden Age detective fiction. A family of greedy relatives awaits the reading of the will of recently deceased Sahei Inugami, wealthy owner of a silk factory. The will turns out to have convoluted rules requiring Tamayo, a non-blood relative, to choose her husband from Sahei's three grandsons. She must do so within a required time period or risk losing her inheritance. If she chooses none of them, she forfeits the entire fortune and it reverts to the mysteriously missing Shizuma, a young man rumored to be Sahei's illegitimate son. Needless to say the will infuriates all the relatives, mostly Sahei's daughters - the mothers of the men Tamayo must consider for her husband. Soon the grandsons are being stalked by a fiendish killer who seems to be re-enacting a curse set down decades in the past.


The story reminded me of an old Gothic sensation novel with creepy settings, frenzied characters, mutilation of dead bodies, and bizarre murder methods employed. The bodies are discovered in unusual places like the eerie garden with life sized dolls all wearing kimonos made of chrysanthemums, or submerged upside down in a frozen lake. One of the most unusual characters is Kiyo who has returned to his home horribly burnt and disfigured from the recent war and wears a life-like rubber mask that resembles the features of his face prior to his hapless service in the war. And of course there is Kindaichi himself - described as a sort of Japanese Columbo elsewhere on the internet. He is an odd man who always dresses in a traditional, albeit shabby and rumpled, Japanese kimono and wears a beaten woolen hat, and for the most part he is of unkempt appearance. He scratches his tousled hair in a fidgety manner when mulling over strange clues, and is given to excitable stammering when on the verge of solving one of the many puzzles attached to the numerous crimes.

I thoroughly enjoyed this book and if I managed to figure out many (but not all) of the puzzles in the story it is not a strike against Yokomizo as a mystery writer. He has a Christianna Brand-like plot device with several characters attempting to protect loved ones whom they suspect of being the murderer and manipulating the evidence. Consequently, the crime scenes as discovered by the police and Kindaichi may not always be a reflection of the truth. This was one of the best parts of the book to me. Yokomizo's fertile imagination and plotting make for an entertaining and satisfying read. What is most frustrating, however, are the numerous allusions to previous books in the series which tantalize an English reader like me who would love to read those other stories. Who wouldn't want to find out why the murderer in The Honjin Murders (Kindaichi's first case published in Japan in 1946) displayed the victim hung upside down from a plum tree? Or discover the horrific secret of a body found stuffed inside a temple bell in Gokumon Island (1948)?  These are only two of the six other books mentioned throughout the telling of the strange murders in The Inugami Clan. But - you guessed it - this is the only Yokomizo book to have been translated into English. I'd have better luck if I could read French - there are at least three books translated into that language that I found, perhaps more. I guess I can only hope and wait for some enterprising translator to give us more of Kosuke Kindaichi's adventures in English.

Here is the trailer for the 2006 remake from director Kon Ichikawa. One of the rare versions I found with English subtitles. Enjoy, then go find a copy of the book and read it!