The Great Yant Mystery - A. B. Cunningham 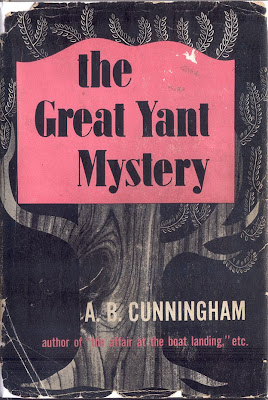 In my second reading of A. B. Cunningham I am discovering that his detective novels are more than just mysteries. The Great Yant Mystery (1943) is the seventh book in this rural American series of detective novels featuring Sheriff Jess Roden. It has hardly a trace of the Southern Gothic that overtook in my first reading in Cunningham’s work yet still in supply are the neat backwoods detective touches that were on display in that other book. This time I felt that Cunningham with six books under his belt was trying for something on a deeper level than a mere puzzling whodunit. This book does have its share of baffling incidents attached to the mysterious death of an invalid, but what makes the book notable is Cunningham’s commentary on how wartime has affected rural Kentucky as well as complexities in Roden’s personal life. It may be one of the earliest attempts in American detective fiction to establish a series detective as a character who grows and is enhanced from book to book – similar to the modern series detectives we now have.

The plot is deceptively simple here. Who would want to murder a terminally ill woman? Isa Yant was on her deathbed with only a few days of life remaining and yet someone felt it necessary to poison her. The poison was not self administered as she was not able to eat or drink without assistance and Roden is sure that it was given to her in food or as medicine by someone she trusted. Almost immediately this causes a furor among the majority of the characters as sensitivities are riled, Roden is accused of slander, of being a meddler, and judging people. When he gives the information to a newspaper reporter eager for a juicy scoop the news is published with the headline ISA YANT MURDERED BY INTIMATE! and all hell breaks loose. Roden is now accused of libel and is challenged by Isa’s husband Clark, her sister May, May’s husband, the family nurse and a local physician. About the only one who does not come down hard on Roden is Isa’s father-in-law, old man Caleb, a crotchety old coot who firmly believes that Isa’s illness was “nothin’ but fakery.”

Roden is also adept at the kind of detective work only a country man could master. When he finds a horse tied up to a sapling with a slip knot and the area showed no signs of any other horse ever being tied there he is convinced that the rider of the horse is a woman in a hurry. He reasons that no man would ever tie up a horse to a weak and young tree like a sapling and never would a man tie a horse to anything using a slip knot. He goes one step further and figures that the woman in a hurry was also acting surreptitiously since the sapling where she chose to leave her horse was in an area far off the main road, a bit into the woods, out of view of anyone who might be passing by. 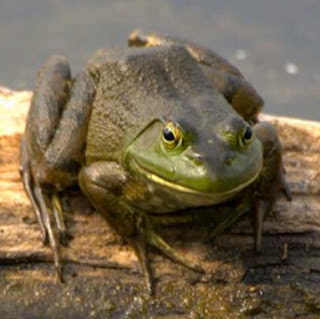 Similar to Holmes’ “dog that did nothing” there is an animal clue that proves to be the damning piece of evidence that will cement Roden’s case and help point to the identity of the murderer. But unlike the dog that did nothing in the nighttime in a nice bit of countrified evidence Roden has a bullfrog that did do something. A witness who was near Isa’s house the night of the murder tells Roden that she heard a bullfrog make a funny noise followed shortly thereafter by a splash. Roden takes this to be a signifier of a bullfrog that was startled by someone near the river and that it jumped into the water. He will elaborate on just how and why the person scared the frog in the final sentence of the book.

That is not to say that Roden does not cheat a bit at being a detective. For all his cleverness about the horse, the sapling and the slip knot, for all the insight into the behavior of bullfrogs at nighttime he still is not reluctant to spy on his neighbors. There are scenes where Roden creeps about underneath window sills eavesdropping and snooping into people’s home who happen to leave their front doors unlocked. He may show signs of ingenuity with the animal world but when it comes to spying and snooping on people he is lacking in subtlety and often gets caught.

There is also a polemical section in the book where Roden mulls over the motives that differentiate male and female murderers. He posits that men and women each have three basic “drives” that will impel them to commit murder. Women he says will kill for love, display or ease. Men he says have women, freedom and power as their main drives for murder.

Love, ease, display. If a woman commits murder, it is for one of these. Without them life would be worthless; for them, no chance is too great. She wants the exhilaration of knowing that a man finds her irresistible, she wants to queen it around, and she wants to be the lady of leisure, stretching like a cat in the sun. If a woman killed Isa Yant, it was a woman who would thereby gain the love of a man or the riches of Clark Yant; riches that would enable her to...take up again the old life of display...


I’ve never heard murderous motives described in such sexist, narrow minded terms. I take issue -- as I am sure anyone would -- with most of what he says as being typically female. Even for 1943 it seems incredibly ignorant. He talks of men desiring women, that their drives are purely biological. Women can't have these drives? He also says that women are not seeking after power. And most insulting of all: "Woman doesn't hunger for freedom. She is docile." Whoa! Is Roden is acting as the voice of Cunningham here? If so -- woe to him. I wonder if Cunningham ever married. Roden, on the other hand, is a confirmed bachelor with an affection deeper for his band of hunting dogs than for women. Yet strangely in this book he has the first inklings of being genuinely attracted to a woman - one of the suspects by the name of Mary Bird. The reader hopes he will score big with her, but his awkwardness in never having taken the time to understand a woman's feelings and his stubbornness in conducting the investigation interfere. Based on his thoughts outlined above it should not come as too much of a surprise that he does not win the girl. 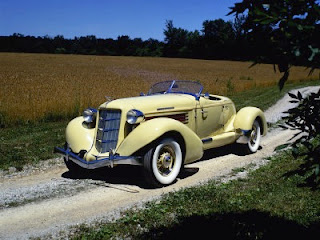 In other places the book is rather surprisingly timeless, ironically making it pointedly modern despite the sexism on display. A chapter devoted to the thoughts of the curmudgeon Caleb Yant discusses in great detail how some of the older generation Kentuckians have grown tired of the encroaching modern ways of city folk and post-war American lifestyle. Hard work and thrift were Caleb's guiding principles and to see the Age of Plenty intrude into his simple and satisfying world galls him. He talks with derision of "conspicuous waste and instalment buying and young striplings frittering their money on nickelodeons and smart Alecs sporting ox-blood shoes and women having their water piped into the kitchen and everybody running around in unpaid-for cars."  He wants nothing to do with convenience and easy living. He even blames Roosevelt for wrecking the country after the New Deal when "sows were slaughtered to make the country rich and checks were handed out for not working the land and the shiftless waxed fat and fished the summer away." Seems that some things in America never change

I enjoyed this book immensely as a wonderful example of how a detective novel can also be a novel about American life. It perfectly captures the shift in an old-fashioned backwoods America and post-war life. Already in 1943 the farms were dying thanks to government assistance and incentives, the quiet of the country was disturbed by fast talking young men in their fast and noisy automobiles, and modern advances in medicine were changing the way a country doctor could treat his patients. All three of these signs of the times will prove to help Roden in solving the murder and unmasking a rather vicious and nasty killer.
Posted by J F Norris at 7:55 PM