Day 1 at Bouchercon 2011 was one of heavy lifting, brisk walking and failed attempts to find Patti Abbot, host for Friday's Forgotten books and mother of that mystery writer gal. I checked out of the swank faux British hotel and drove a mere 7 miles to the new digs. I'm at the Westin, right across from Busch Stadium, and only a half a mile from the convention site. As I thought -- nice but not as luxurious as The Cheshire.

Started out with the Guest of Honor interviews. Pictured above they are (left to right ): Colin Cotterill, Charlaine Harris, Oline Cogdill (the panel moderator), Val McDermid and Robert Crais. It was an informative and raucous hour filled with anecdotes, confessions and the usual sharp humor.

They were asked questions about their approach to storytelling, where they get their ideas, how their writing has evolved over the years with their series characters. My favorite quote from Colin Cotterill was this in response to his series character Dr. Siri


With my character who is 74 years old I couldn't see him being around for twenty years . And that's why there are 11 minutes between each book.  Sometimes less.

A huge wave of laughter followed. But nothing compared to the tsunami of laughter that resounded when Val McDermid told an anecdote she wanted to use in a book that involved a friend's visit to a spa and the line "And then she choked on his penis" to which someone inquired "But how did he get it around her neck?" An exchange she has wanted to put in a book for years but has yet to find the right scene and the right book.

I spent a lot of time waiting in line to get books signed, too. Chatting up the other collectors waiting on line with me, sharing likes and dislikes in books and subgenres, and occasionally remembering that I brought my camera to get candid shots of the writers. I've spread a few throughout this post. Still none of me yet. I told you not to get your hopes up.

Then it was off for my my first of what will be many visits to the book room.  I went directly to the table for Uncle Buck's Mysteries. I spent a good deal of time chatting with June Waller who I first met at Bouchercon 2005 when it was last in Chicago. At that convention I was fortunate enough to be in the dealer room and my table was right next to her and her husband. I was saddened to learn that her quiet and charming husband died several years ago apparently not long after that Bouchercon in 2005. I remember how much he enjoyed getting the books signed by the authors. I said that this was a sad year for the mystery bookselling world and mentioned John Leininger's passing (Alice Ann Carpenter's husband and co-owner with her of Grave Matters) and then also mentioned Enid Schantz' death. She was shocked to hear the news. We talked about how much Tom and Enid have done for the mystery book world and especially the Bouchercons of the past. Then the topic moved on to brighter things and I began to admire her amazing collection of vintage mysteries. I told her I may be tempted to spend an awful lot of money - especially on some A. B. Cunningham books she had in excellent DJs and some other authors who books I won't mention lest someone read this post who is also at the convention and buys them before I do. June said that people don't seem to be interested in the old books any more but I assured her that their is a growing audience and that many of them are younger than she would ever believe. She was surprised but glad to hear it. I also told her about my concerted effort to enlighten the mystery reading public about the older forgotten books with this blog and that there are many blogs devoted to the vintage books. She smiled at that. "If only they were here buying my books!"

One of the most surprising things that happened to me was at dinner. I had chosen to eat at The Dubliner, an Irish pub restaurant. While waiting a very long time to be recognized and seated, two women with Bouchercon badges hanging from their necks came in behind me. One of the women noticed my book bag (never without it even at meal times) and asked if I was attending the convention. "Yes. but I always take off my badge when I leave the hotel." When the host finally decided to seat us he asked the two women how many the other women turned to me and asked if I would like to join them. I had to say yes. Things like that never happen to me.

We had a very enjoyable meal with lively conversation. I found out one woman, Beth, is employed by Permanent Press, a small publisher in Nashville and the other, Jennie, is a writer who has a series of home repair mysteries published by Berkley Prime Crime. We talked about our past and present jobs, lives in the theater, our mutual distaste for the vampire phenomenon in thriller fiction (laying waste mostly to the Twilight mania), and a respect for the vintage writers. 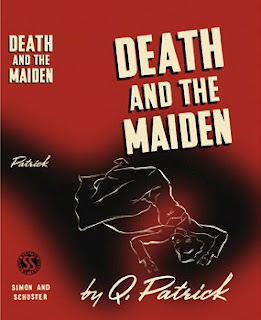 Jennie leaned in after the meal and challenged me with this question: "OK, I have a old mystery writer for you. Patrick Quentin. Know him?" But of course! Then we talked about Peter and Iris Duluth and Suspicious Circumstances and Death and the Maiden. She even knew about the Jonathan Stagge books. She told me when she was growing up in Norway the Quentin Patrick books were a big hit in Scandinavia. That led to a discussion of the Neo-Nordic wave currently sweeping crime fiction. She gave me titles of Patrick Quentin books worth reading and also mentioned a prolific Swedish writer named Maria Lang that I would probably like but sadly none of her books have been translated into English. Finally, I mentioned the only Norwegian writer I know of from the pre WW2 years, Frederik Viller, who wrote an excellent mystery called The Black Tortoise (1901) that was translated into English in the 1920s.

I'm having more fun than I thought I would. The surprise dinner invitation is the kind of thing you can never predict but is so typical of this amazing community that exists in the Bouchercon world. Bruce DeSilva, who won a Macavity for his novel Rogue Island, made a heartfelt and eloquent acceptance speech that commended the welcoming spirit and camaraderie of the crime fiction world and noted how unlike it is from any other writing community. I've read this before and heard it before and now I know it to be true.

Tomorrow I'll write about the late night panel I just returned from. The topic? "Sex, Violence and Everything That Makes a Great Book." You can imagine the quotable quotes I pulled from that discussion.
Posted by J F Norris at 12:45 AM