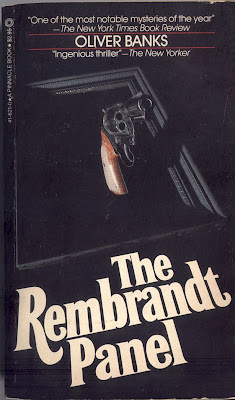 Amos Hatcher is an independent private investigator who chooses his own cases from a list provided by the IIAD, the International Association of Art Dealers. He recovers stolen art on a contract basis. We first meet him in The Rembrandt Panel (1980), an Edgar Award nominated first mystery by Oliver Banks, a former art critic and historian whose other books were all nonfiction prior to his foray into the mystery novel.

This is not a whodunit. It's a cat and mouse thriller. Similar to the stories on the old Columbo TV show we know from the start who the culprit is and watch as the Boston Police and Hatcher team up to track down the thief and killer. We watch Elton Ross, a curator at the fictitious Boston Museum, lose control of himself in an effort to cover up a huge financial mistake. He convinces the Board of Directors of his museum to purchase a Greek pot - a krater - at the unheard of sum of $500,000 only to discover that it was stolen property. Now he learns of the existence of an extremely rare painting most likely the work of Rembrandt. Ross is determined to get the painting by any means, sell it and return the money to the museum before his gaffe is discovered. But his plans go awry and in his attempt to get the painting he murders two men - a two bit art scout who found the painting and an old antique shop dealer to whom the scout entrusted the painting. And Ross continues to track down anyone who may have known of the paintings existence and murder them as well.

This fast paced book while loaded with all sorts of intriguing art history on Dutch painters, Greek pot artists, the wheeling and dealing in the art trade, and skulduggery behind the scenes of art acquisition in the museum world, is mostly a well done, uncluttered yeoman job of storytelling. The story begins in Boston but will take Amos to Amsterdam and Switzerland as he does remarkable detective work based on only a few clues taken from the ebony frame that originally held the stolen painting and using a list of known art felons and collectors. The climax at an art auction in Maine, however, is a bit clunky with unnecessary passages that impede the action including a shaggy dog story from the cops about a near car accident involving their police car and a rabbit.

Banks wrote a sequel to this book called The Caravaggio Obsession also featuring Amos Hatcher and the two cops O'Rourke and Callahan. After that he never wrote another mystery novel.
Posted by J F Norris at 6:00 AM