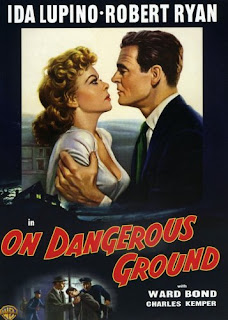 Here's my contribution to the Nicholas Ray Blogathon hosted by Tony at Cinema Viewfinder. It began on September 5 and typically I got my post up on the last day - today, September 8. For other posts on Nicholas Ray's movies go here. When at Tony's blog you can also check out numerous reviews of his own on Ray's work and reviews by guest writerss that have received a spotlight page.

On Dangerous Ground takes a modern look at the lonely life of a cop who has been so disgusted and deadened by dealing with the seedy underworld of criminals that he nearly destroys himself and his career. It's based on a British novel Mad with Much Heart by Gerald Butler. While the movie retains the name of the lead character and his relationship with a blind woman who is the sister of a murder suspect he is pursuing that is about all that the book has in common with the movie. The setting is changed to the US and the entire first half of the move set in a noir world of petty criminals, prostitutes, con men and oversexed and drugged out molls is entirely the creation of Ray and screenwriter A. I. Bezzerides who makes a cameo as a corrupt bar owner.

For a second viewing of this excellent movie I have to say I didn't recall much. It was like watching it for the first time. After the second viewing, I watched a third time and - yes - a fourth time. Each viewing revealed a new layer to me, something new and exciting, something touchingly poignant, something subtly devious, something subversive that slipped by the censors. Each time I marveled at how this movie made over fifty years ago still has power and resonance today. 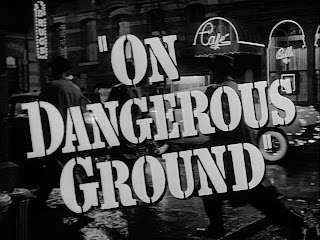 The opening credits are accompanied by one of Bernard Herrmann's magnificent scores. Blaring french horns and clanging bells dominate the music that suggests the call of hunters of horseback as we watch a car - presumably a police car - patrolling the city streets lit only by streetlights and the occasional neon sign. Then, the first image: a gun in a holster. In quick succession we meet three policemen all on their way to their night shift jobs. Two men are married - one with a wife who hates to be alone and quite obviously a sensual loving wife, the second married with a silent wife and a brood of seven kids with whom he watches western shows on TV. Last is Robert Ryan, playing Jim Wilson, who lives alone in a cramped studio apartment. No one helps him into his coat or shoulder holster, no one hugs him tightly as he tries to make his way out the door. He looks over his shoulder to an empty table before he leaves his home.

The we see what kind of people Wilson has to deal with every night. He's hit on by a bar girl clearly underage ("How old are you?" he asks her. "Old enough," she kittenishly replies.) He has to shirk off the whining addictions of an alcoholic informer named Lucky. Later from another informer he receives a tip that might be able to help his team locate a gangster on the run. It's the gangster's girlfriend Myrna (played with sleazy relish by Cleo Moore) and she's quite a number. She comes to the door, bleary eyed, slurring speech and immediately tries to come on to Wilson. She teases him and invites his advances. In the presence of his partner he refuses, then notices some battle scars from being tossed around by someone. He asks the partner to go outside. Myrna tries another ploy with Wilson. She suggests he give her similar attention and he leers at her. The scene fades out and we're unsure what kind of attention Wilson will give the girl, but we know it's probably not going to be sex.

Wilson succeeds in getting one more name from the woman and the cops make their way to a second flophouse where Wilson is in rare form. He beats another suspect but his partner interrupts him and the entire floor of residents rushes to the still open doorway of the apartment. The gangster jeers at Wilson, "Go ahead and hit me" hoping he will in the presence of witnesses, but Wilson knows better. He once again sends his partner outside to get the residents back in their rooms and asks him to close the door. And then we see Wilson completely fly off the handle. Screaming and raging at the poor sap: "I'll give you something. I always get what I want. Why do you make me do this to you? Why? Why?" The scene fades out but even in the squad car on the way to the much needed hospital Wilson cannot restrain himself. His partner has to prevent a second beating as the gangster is escorted in the hospital where it is later discovered he has a ruptured bladder among other serious injuries.

Wilson is one sorry soul. A solitary existence with no friends ("A cop has no friends," he tells his commanding officer), no wife, no one in whom he can confide and his hatred for the degradation he must face everyday has eaten away at his psyche. His verbal lashing out and his uncontrolled violence are signs of a man in serious trouble. He hates himself but he can't stop himself. The numerous lectures he receives from his cop partners and the captain never seem to sink in.

"You sure don't care about people do you?" says one cop after he gets the dope from Myrna, the floozy. Wilson must know, his partner reminds him, when her gangster boyfriend finds out she ratted on him she'll most likely be killed. Wilson has no response, only a slight sneer.

Another of his fellow cops tells him, "To get something out this life you have to put something into it. From the heart." This is the most telling piece of advice Wilson will receive and it will come back to him later in the movie.

Out of control and fearing he will not only hurt more people but hurt the entire force and ruin their good standing the captain takes Wilson off duty in the city. He's sent to Siberia - upstate New York, that is - to help in the capture of a child killer. When he arrives he meets Walter Brent, the father of the murdered girl and Wilson might as well be looking in a mirror. Brent (Ward Bond) who, by the way, is never seen without a rifle in his hand, is bent on revenge. He wants only one thing - the blood of the man who killed his daughter. Just as Wilson has his fists, Brent has his rifle. "None of your city stuff -- no fancy trials, no sob sisters. I'm just gonna empty this shotgun in his belly. Anyone who tries to stop will get the same thing." One of many chases ensues. They set off on foot and follow footprints in the snow, then have to pursue him by car when the suspect knocks down a man and steals a car. Brent and Wilson commandeer a car from a woman gathering wood.

Wilson, in the face of the brutish and brash Brent, immediately takes the opposite tack. He adopts a more sensible and quiet persona. At the home of the blind sister Mary (Ida Lupino) loneliness is talked about repeatedly. Mary says "A city can be lonely, too. Sometimes I think people who are never alone are the loneliest. Most lonely people try to figure it out -- about loneliness." She senses almost supernaturally, as only blind people in the movies can do, that Wilson is a good man with a good soul. She tries to link the two of them together in their solitary lives. But she's picking up cues that we know mean something completely different. She says, "There's no pity in your voice. You didn't take the tray from my hands like most people." She thinks he's been around a blind person before, but he really doesn't care what she does. He watches her. He's sort of fascinated by her. Perhaps in this woman he has a chance to change his ways.
﻿
﻿The first scene between Mary and Wilson is really something to marvel. Mary tries all sorts of persuasion methods in trying to win Wilson to her side. Wilson is amazed that anyone can think of him as a savior, as a person to whom she can entrust her misunderstood brother. We know that if Wilson had run into her brother in the city he'd beat him senselessly and see him as a freak. But to a man who has never been accountable to anyone other than himself he sees this as a chance to prove himself. Mary provides him with a chance to change. If he can find the boy and save him from the vengeful hands of Brent he might be redeemed form his hateful brutish self. he might be able to exorcise the demon inside him. He doesn't want to become Brent.

The movie then becomes a war between Brent and Wilson. Who will get to Mary's brother Danny first? Will he be killed vigilante stye or will he be resecued from execution? Wilson is determined to prove that he can settle a case without violence. The first thing he does is to disarm Brent while he's asleep. He never raises a fist while in the country. Outside of the city it seems he has a chance. Free from the sleaze and corruption, without a bar in sight and not one temptress trying put the make on him Wilson is sure he can escape the trapped world of cruelty and brutality he himself created.

The climax of the movie is heart racing. With Herrmann's music underscoring a chase to a rocky cliff it is hard not to draw comparisons with North by Northwest. Close-ups of feet slipping on the snowy rocks, Brent after Danny, Wilson after Brent and Danny so desperate to escape and not looking where he should be looking. It's the most thrilling set piece in the movie.

Some take exception to the almost too neat way in which Wilson is redeemed. I've read other reviews of this movie calling his transformation unbelievable. I couldn't disagree more. The story is perfectly structured. All the signs of his self-loathing are there. We know he wants to change and Mary is his last chance. Everything in the movie serves this ultimate goal. Not only the technical aspects of camera angles, editing and lighting, but every line of dialog, every prop, even the costuming choices and bit characters all have a genuine purpose to the overall story. On Dangerous Ground is truly a modern movie - a movie with a noir heart that is longing for desperate change.
Posted by J F Norris at 8:13 AM