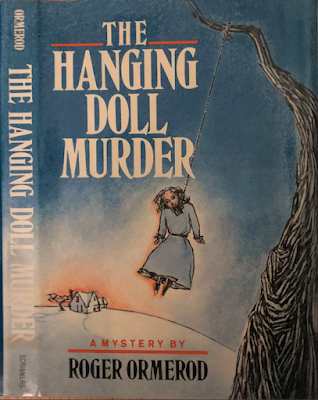 Can a murder mystery about a locked room with a broken window still be considered as an impossible crime?

The bloody shotgun murder in The Hanging Doll Murder (1983) sure seems like one. A man has been found with his face blown off and his hands mangled from the being shot at by both barrels of a shotgun. The entire house was locked from the inside and the front door has swelled from cold weather and cannot be opened. But one window in the kitchen has a hole in it, presumably from a shotgun blast and yet it’s too small and almost too perfectly made. And why is there no glass on the inside of the house if someone shot the victim through the window from the outside. Why is the glass only found outside in the snow covered ground that reveals hardly any footprints?

Is a puzzlement, as the King of Siam used to say.

Ultimately it isn’t the puzzle of the broken window that makes the book such an engaging and devilish bit of detective fiction. With a deviously layered plot, one brilliant piece of misdirection, and a gasp inducing surprise in the final pages here is a throwback to the heyday of detective fiction when story and plotting superseded character study and grim psychological probing. TomCat who blogs at Beneath the Stains of Time has reviewed several Roger Ormerod mystery novels and I finally succumbed to temptation after his most recent review mentioned other Ormerod titles with possible locked room elements that he wanted to investigate. The Hanging Doll Murder was on that list of books.

If the locked room really isn’t completely sealed and the problem of the broken window is only a minor impossible problem that doesn’t discount The Hanging Doll Murder as a fine piece of mystery fiction. But I prefer the original UK title Face Value. It’s much more fitting both for the pun about the identity of the murder victim as well as the colloquial meaning of the phrase. A clever police constable introduces the idea of the title when he says “on the face of it” the crime appears to have be committed one way, but what if the exact opposite were true? I can’t reveal either side of his argument without spoiling one of the many clever ideas Ormerod presents in this story of a violent crime.

A burned out car, a missing husband and the release from prison of a murderer/rapist all culminate in the shotgun murder. Prior to the discovery of the murder a weird plastic doll with a beard glued to its chin was found hanging from a noose in a tree on property belonging to the former prisoner. Later some taunting drawings are found painted on the house itself. Was someone out to kill the prisoner? Who is the victim? The husband? The ex-con? Or someone entirely different? Amelia Trowbridge reported her husband missing and becomes a key suspect when police learn she was instrumental in getting the rapist released from his life sentence. 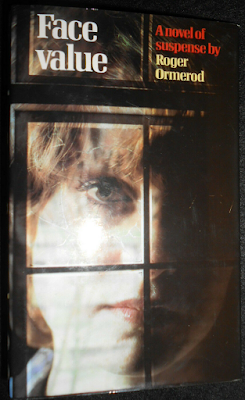 This is the first of ten novels featuring Richard Patton. It is also the book in which he meets his future wife. Like Lord Peter meeting Harriet Vane during a murder trial in Strong Poison and The Man in the Moonlight in which Dr. Basil Willing first meets his future wife who is a prime suspect in a murder investigation, Patton meets Amelia Trowbridge who the police are highly suspicious of having done something to her missing husband. But unlike those very innocent other future wives of fictional detectives don’t be too quick to cross Amelia off the list of suspects in this instance. Things look very bleak for her indeed and her behavior does not improve matters. Patton is certain she is guilty of something if not murder then some terrible secret.

I really enjoyed this mystery novel. Rarely am I as thoroughly surprised by everything in a story as I was by this book. That it’s fairly contemporary is all the more wonderful. This is an excellent example of a modern mystery that honors the traditions of the Golden Age and still incorporates modern police technique, modern behavior and a motive that will never go out of style. I kept trying to outguess Ormerod at his own game and failed miserably. Patton makes a stunning pronouncement in the final chapter that explains a very minor mystery that I basically dismissed the moment it was introduced. Foolish mistake for that minor mystery is key to understanding the entire solution. It all reminded me of a particular trick repeatedly employed by Agatha Christie with great finesse. There are several amazing twists in the plot not the least of which is what happened to Amelia’s husband which is truly the most brilliant part of the story. Highly recommended. I’m off to find more Roger Ormerod books!