FFB: The Dead Have No Friends - John Donavan

THE STORY:  Intensely disliked, but extremely popular and financially profitable, novelist Emmanuel Cortal is murdered in his unique glass enclosed writing studio.  There is only one entrance and it was locked from the inside. His death may at first seem to have been natural, but police find he has been poisoned with a highly unusual toxin. How was the administered when apparently no one went into the studio the night he died?

THE CHARACTERS: Although The Dead Have No Friends (1952) is by John Donavan Sergeant Johnny Lamb, Donavan's usual series detective is nowhere in sight.  Instead we have Chief Inspector Roger Newlyn, the son of a Marquis who is affectionately referred to as "the Dook" by the policeman on his team or as Mrs. Coker, the cook in the Cortal household, describes him " a reel haristocrat." Despite the deferential attitude of servants who address him as "my lord" and the perks he gets that come with his family name Newlyn would much prefer to be done with his inherited title and just be known as a policeman.  He's efficient,  likeable and very good at his job as are the men who serve under him. Though as prominent as his role is Newlyn surprisingly is not the one who solves the case. Figuring out the strange murder weapon, the way it was administered and the unveiling of the identity of the killer falls to someone else entirely.

That man is Benjamin Scarle, who we first get to know in a scene of outrageous bluster and pompous anger in the office of literary agent T. F. Rodder.  Scarle is a former police commissioner, now retired, and is a bit behind in turning in the manuscript of his memoir he was coaxed into writing. Contentious, opinionated, and formidable Scarle will remind detective fiction fans of similar larger the life sleuths as Sir Henry Merrivale, Professor Stubbs, and Simon Gale.

Cortal, of course, is also one of Rodder's clients and this is how Scarle becomes involved in the case.  Though he claims to be retired Benjamin Scarle is one of those policeman who will never give up his work. Often serves as a consultant in some of the more complex cases involving Scotland Yard.  Newlyn is quick to enlist his aid when the is told the coincidence of Cortal and Scarle being clients at the same literary agency.

I made a long list of characters because the first section of this novel, a scathing satire of literary workplaces, was overflowing with names and personalities.  None of the people at the Rodder agency is pertinent to the murder case other than T. F. Rodder himself.  I wasted an entire piece of paper making notes on the staff and their delightful eccentricities only to never read of many of them after the first three chapters. Nigel Morland, the writer behind the "John Donavan" pen name, clearly was having a lot of fun in poking fun at the world of agents, publishers and writers. I wouldn't be surprised if many of these characters were based on people he knew. Instead of eagerly scribbling down notes on the staff of the agency I should have just waited until the police started their murder investigation. For it is the Cortal household with its myriad servants, Cortal's soon-to-be ex-wife Vivien, his 12 year old son Tony, and actress paramour Gerda Heywood who are the real characters to pay attention to.

INNOVATIONS:  The murder scene, of course, is perhaps the most original element.  Cortal has built for himself a private sanctuary where he can be in isolation while he writes. Within the cavernous ballroom converted into a library of his Georgian mansion he has placed his transparent studio, an entirely glass-enclosed private domain where he can see anyone coming toward him on all sides. Thankfully we are given a beautifully drawn and labeled plan of Cortal's glass room-within-a-room that definitely helps the reader understand how impenetrable it appears to be. 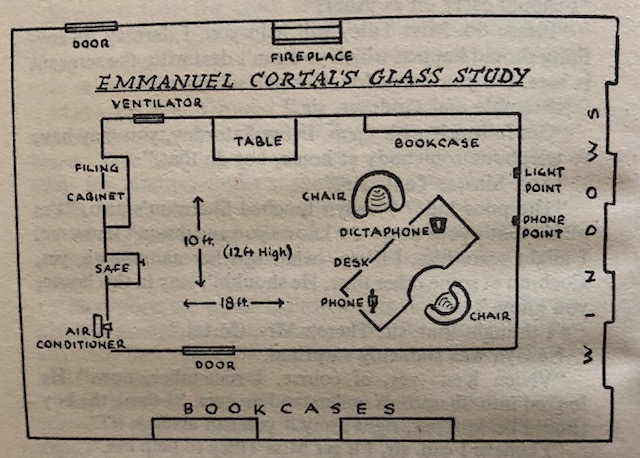 But in addition to the odd murder setting Morland adds clueing about the door of the ballroom's main entry which leads to the glass encased writing studio.  One of the maids has a great scene where she mentions the clicking of the door handle. She has exceptionally hearing and has always been aware of the odd noise which reverberates through the nearly deserted floor where the ballroom and studio are located.  Much is made of this and Newlyn sensing the young woman's sincere attitude and resolute reporting has his team investigate the door. They determine that the clicking sound only occurs when someone leaves the room. One brilliantly observant cop even shows Newlyn exactly how it makes the noise. This bit of info is crucial to eliminating possible suspects among the list of those who visited the ballroom just prior to Cortal's death.  The whole book is filled with excellent details like the "mystery of the clicking door" in helping the police determine who could have killed Cortal. 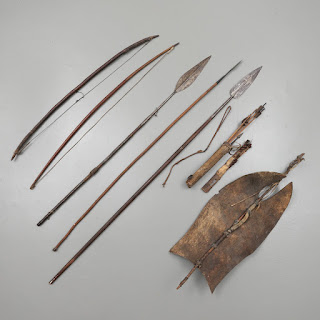 Also notable is Cortal's weird museum of African artifacts and medieval weaponry, a hodgepodge of dangerous objects that were left in an unlocked room. I was reminded of the many similar scenes from the crime museum in Isabel Ostrander's The Twenty-Six Clues to the collection of skulls in Freeman's The Uttermost Farthing all the way up to the prominently displayed weapon collection that features in the climax of the recent movie Knives Out.

Much of The Dead Have No Friends reminded me of a classic Agatha Christie novel. The multiple Golden Age motifs and conventions continued to pile up and delighted me the deeper I got into the book. A convoluted will with a cruel legacy, an actress who does more acting in real life than on stage, a murder mystery novel ghost written by one of the suspects, minor characters who seem to be thrown in only to  entertain the reader but who prove to be most important of all -- all of these elements make The Dead Have No Friends a corker of a murder mystery. Morland was always a thriller writer first and foremost, and he cannot resist adding a hair-rising climax worthy of the cinema. It's so well done that I found myself gasping in awe but moreso for it being highly reminiscent of the finale of one of Christie's best mysteries.

QUOTES:  Wessex Street on a Sunday forenoon has a peculiar air, like an old lady in a tube subway waiting for somebody to tell her where to go.

A typical outburst from Benjamin Scarle: "Hell's bell, Malcolm, you're a nasty-minded chap! Don't stare at me like a recalcitrant bacteria, startin' revolutions on a culture plate."

"Your mental dexterity is only equaled by your appalling audacity."

Scarle was not a psychic man: he had that quality of all real thinkers, in that he could parade invisible people before him and survey them from a godlike peak, guided by understanding and insight blessed with the incisive, merciless qualities of a scalpel. As the actors in the tragedy...passed before him each was dissected neatly, as if the heart was cut open and its secrets betrayed.

EDGAR WALLACE ALLUSIONS:  Morland was Edgar Wallace's protege and friend. His early books were dedicated to Wallace and are modeled on his style of thriller with policemen as protagonists and not an amateur sleuth in sight.  Morland also claimed to be his secretary. Wallace is mentioned two separate times in this book. First, in a faint allusion that only a few might catch. Cortal is described as posing with a cigarette in an extremely long holder "copied from a long dead and still unforgotten writer of detective stories who had been loved as Cortal never would be."  The second time Wallace is directly mentioned when the investigation uncovers the ghost written novel The Pliny Problem. Rodder, the literary agent says: "Don't you recall how people used to say that Edgar Wallace had hacks to write his books? I knew E.W. well and I can assure you it was fatuous nonsense."  A clear case of Morland inserting himself into the narrative. 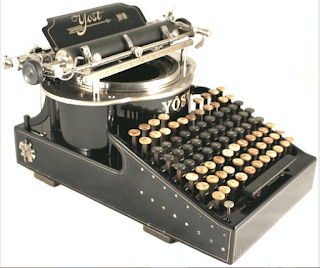 THINGS I LEARNED:  The Yost Typewriter is mentioned in a throwaway line and of course I needed to look it up.  Named after its inventor George Washington Yost it is one of the earliest typewriters, created in the last decade of the 19th century. An early ad proclaimed its original features: "No ribbon, direct printing, permanent alignment." As for the remarkable lack of ribbon here is how that worked according to an article at Antiquetypewriters.com: "Inking is done by a felt pad positioned in a full circle around the top of the tower where the type-bars rest. The type-bars travel an intricate half-flip upwards to reach the platen and then are channeled, by an inverse pyramid shaped guide hole, to strike the platen in exactly the same spot every time, giving the accurate alignment that Yost demanded."

I learned all about Acokanthera schimperi a plant indigenous to eastern Africa. Its bark wood and roots are used to make an arrow poison as well as being used in tribal medicines. 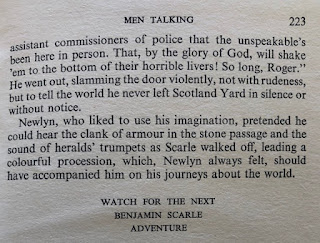 SUMMARY:  Written in 1952 and seemingly very modern The Dead Have No Friends simultaneously seems like a retro Golden Age book.  It may have been written years before and sat around waiting for the right time for Morland to submit it. The only sign that it is a later work is his more mature approach to characterization, the moral nature of the resolution, and the focus on psychology which was one of his main interests in the last half of his writing career.  I found little in his writing to arouse my irritation like xenophobic or ethnic slurs, misogyny or any of his other sins for which he has been derided.  The locked room puzzle, the clever murder method, the clues that lead to the solution, the abundance of suspects and motives -- all of this is redolent of the good ol' days of pure detection.  In fact, of all the Morland books I've read, whether under his real name or a pseudonym, I will concede that this is perhaps the best of the lot. As seen on the final page to the left (no spoilers at all in the bittersweet final paragraphs, BTW) the publisher promised more adventures from the thoroughly enjoyable Benjamin Scarle. Sadly, nothing ever came of that. The Dead Have No Friends is his first and only appearance.

It's a shame that this fine book is so ridiculously scarce. Purchased a few months ago my copy is the first I have seen in over 45 years of collecting and reading vintage crime fiction. This is one to add to the list of Must Be Reprinted titles. Here's hope that some enterprising publisher stumbles across this post and takes up the challenge.