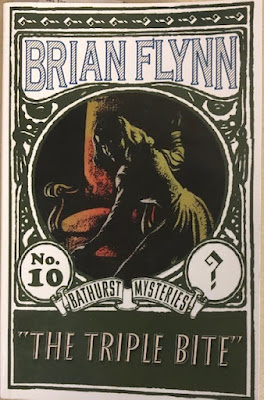 THE STORY: A riddle in rhyme and a complicated alpha-numeric code are the key to a hidden treasure that lifelong criminal Sam Trout has left to two lucky people. One of them is Nigel Strachan, a lawyer who defended Trout in his last criminal trial, and whose kindness and decency is being rewarded by Trout with the chance of finding the treasure. Trout is leaving it up to “the best brain” among the two lucky recipients to solve the riddle and code and find the hidden riches. Nigel brings the code to the Cameron household and hopes his friends will be able to help him find the mystery location by breaking the code. Murder and mayhem follow when a group of crooks learn of the hidden treasure and stop at nothing to get to the treasure first.

THE CHARACTERS: The Triple Bite (1931) is another of Brian Flynn’s experiments in narrative structure. Once again we have a first person narrator – this time a woman in the person of Cecilia Cameron – who finds it necessary to step into the shoes of other people in order to tell portions of the story. Cecilia like Rector Parry-Probyn in Murder En Route (and apparently other Flynn mystery novels according to Steve Barge’s introductory material in the Dean Street Press reprint edition) will often write entire chapters in the third person to tell us of portions of the story when she was not present herself. She later explains that these were told to her afterwards by the people who actually experienced those parts of the action. Usually these scenes feature Bathurst alone muddling over some odd piece of the puzzle or the police interviewing suspects. I wonder what the point of this is. When it would be just as easy to write the whole book in third person. I thought that this was a peculiarity of Brian Flynn, but recently quite by accident while I was reviewing a few of my old posts I discovered that this very mixing of first and third person occurs in Catt Out of Bag (1939) by Clifford Witting. Was it a trend in popular fiction then? Was everyone mimicking one another?

The novel starts out like a dime novel thriller with good guys and bad guys clearly delineated and no real mystery as to who might be the villain of the piece. “Flame” Lampard and his gang of thugs infiltrate the Cameron household, intimidate and threaten, abduct and even bind and gag the housekeeper. A shootout occurs one night as the crooks do their best to get the heroes and heroines to give in to their demands. When Cecilia’s uncle is found dead outside a nearby home, seemingly from natural causes, she finds it necessary to call in Anthony Bathurst. Only then does the plot morph into a genuine detective novel.

Flynn does a good job of sprinkling the gruesome and bizarre events with a healthy dose of lively humor. Cecilia’s Aunt Elspeth is on hand for some moments of comic relief with her supercilious comments and derisive put-downs and Bathurst is always willing to lighten the impending darkness with a quip or two.

INNOVATIONS: In addition to being a nifty genre blending mystery incorporating aspects of a crime thriller and a detective novel with a soupcon of Gothic chills The Triple Bite is a homage to Victorian and Edwardian detective fiction, the kind of stories that seem to have greatly influenced Brian Flynn in his mystery writing. The first and most obvious homage is to Sherlock Holmes. In the brief introductory note that precedes the novel Flynn tells us himself that he was inspired to write his book based on “one line of a [Holmes] short story” by Arthur Conan Doyle. We are not told from which story this one line comes until the final chapter. The line refers to one of the many unchronicled cases of Holmes and Watson, some of them too gruesome or sensational to be told to the general public. The one line appears in an entire paragraph of case references – six in total – found in the short story “The Adventure of The Golden Pince-Nez.” I see no need to hold back that piece of info since Flynn and Bathurst hold back too much already, not only in this novel but in almost every one of his adventures. Even if you look up the paragraph (or know it by heart) it is doubtful you will be able to tell exactly which case inspired the writing of this book.

In his introduction Steve Barge, our resident Flynn maven, makes some conjectures about this particular Holmes case and its use in The Triple Bite, but I’m surprised he completely overlooked the other detective fiction allusion in the novel. In attempting to solve the riddle/code in Sam Trout’s note Bathurst is reminded of a similar use of jargon in a case solved by Martin Hewitt, Arthur Morrison’s consulting detective whose adventures were published in The Strand and Windsor Magazine the same years as the Holmes stories. There is an unfortunate typo when the case is mentioned in this reprint edition. Whether the error was in the original text used to create this edition I do not know, but someone ought to have corrected it. The case is “The Adventure of the Flitterbat Lancers”-- rendered as Dancers in this edition. Anyone acquainted with that tale will know that it features a discussion of criminal underworld argot. You learn the meaning of slang terms like horney which means a street musician who plays the cornet, and an unusual use of the word dancer. This truly arcane term is wholly unfair to the reader unless he happens to be a veteran of Victorian era crime or a diehard fan of Martin Hewitt’s exploits. Luckily, Flynn explains the peculiar meaning both in Morrison’s story and as it applies to the case Bathurst is trying to solve. 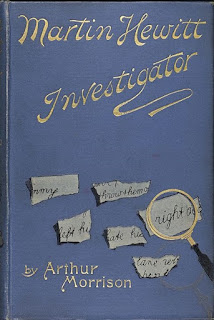 My only complaint was the endless talk in monologue form. Bathurst does go on at length too often. Conversations are dominated by one character who drones on and on, rather than making the scenes more dynamic with input from all the characters. And Flynn has a regrettable habit of letting his paragraphs run on interminably for entire page lengths when in fact they are made up of multiple paragraphs. He needed a real editor back in the day. With this new edition there was an opportunity to improve ease of reading by breaking up those long paragraphs into smaller ones. A minor quibble and a personal taste of mine when it comes to reprinting older works.

Though this novel may owe too much to century old detective stories it was overall one of the better Brian Flynn mystery novels I’ve read. The bizarre murder means, the inclusion of a code and riddle (one easy to solve, one overly complicated) and the general good humor expressed throughout the novel all made it well worth reading. Still it’s no Murder En Route. I’m hoping that soon I’ll read one of Flynn’s mystery novels that lives up to the ingenuity and high entertainment quality of that book.
Posted by J F Norris at 3:02 PM