FFB: Dangerous to Me - Rae Foley 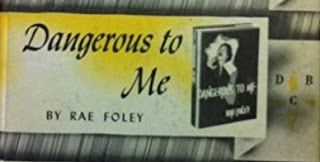 THE STORY: Answering a personal ad for an unusual job leads Paula Savage to discover the ugly past of Coxbury, Connecticut. What should have been a simple research job for a local historian instead turns into a perilous adventure accented by attempted murder, anonymous letters, an angry lynch mob and the strangling of her employer’s close friend. All the turmoil is linked to a crime committed twenty years ago in Coxbury and the release of the man sent to prison for that crime. Was he in fact innocent all the time? And if so, is the real murderer seeking to keep the truth buried and secret at all costs? 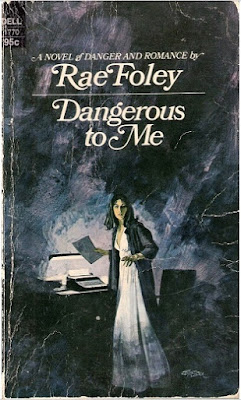 THE CHARACTERS: Paula is a woman with secrets of her own. We don't find out why she desires to escape from New York and take on a job for which she seems ill-equipped until well pass the midpoint. Over the course of the novel we learn of her true profession which she gave up recently, her failed marriage, and the fate of Derek, her possessive and unbalanced husband. Dangerous to Me (1959) though ostensibly about Paula and her new job prospects is really all about the release of Lenny Horgan from prison, the murder of Evelyn Dwight for which he was found guilty, and the truth of why Evelyn was killed and who was really responsible.

In being interviewed for the research position by Helen Quarles, a friend of the Coxbury historian, Paula hears from Helen the story of Evelyn Dwight’s murder, the trial and the fact Helen’s testimony was key in achieving a guilty verdict against Lenny. She feels Lenny Horgan is dangerous to her and she fears for her life when she learns of his release. Her fears prove prophetic when she is found dead outside the Central Park Zoo. Police try to pass it off as a mugging. But when Paula is pushed into the path of an oncoming taxi and saved at the last moment she believes that both she and Helen had information about Evelyn’s death that the real killer wanted kept hidden. But what exactly was it that Helen Quarles told Paula that could have been so threatening to that person? Paula turns to Hiram Potter for advice and help.

Hiram Potter is Rae Foley’s accidental detective. He had appeared in four novels prior to Dangerous to Me and in each of them reminds us that he does not consider himself a private detective. He takes no payment for his help but always ends up questioning townspeople and behaving like a private inquiry agent. He says he cannot help himself, that he has an insatiable curiosity. As Paula’s playwright friend Graham Collinge tells her, “All you have to do is let him scent a mystery and he’ll follow it like a bloodhound.”

Potter is descended from a long line of fictional bachelors of independent means in detective and mystery novels who see themselves as knights errant on quests of good deeds. He has a knack for charming people into revealing themselves in casual conversation. As a consequence of his probing questions often gets himself into dire situations. In the final pages of Dangerous to Me Hiram finds himself in a Poe-like predicament that while harrowing is also excessively melodramatic and a bit too unbelievable for the culprit to have carried off.
This is ultimately a tale of long hidden secrets, misguided friendships taken to extreme and a perversion of the concept of loyalty. A close-knit group of young men who were all teenagers when Evelyn was killed are the focus of Hiram’s investigations. Also the wife of one of those young men Claire Tooling features prominently. Claire is a vindictive woman who saw Evelyn as her rival. Paula at one point begins to think that Claire might have killed Evelyn herself but Hiram thinks she is more suited for orchestrating an Iago-like conspiracy that led to Evelyn’s death. The truth is ultimately more harrowing than either of their surmises.

Among the most memorable of the supporting characters is Ross Bentwick, an alcoholic actor, whose dissipation allows for an arresting candor. He has a telling scene with Paula in which he exposes the truth Coxbury’s collective guilty conscience, and that there are uglier and worse crimes than murder – “Such as cruelty, malice and all uncharitableness. Such as exploitation and domination. Such as sowing the seeds of hate and fear…” Ross is one of the better examples of the dissolute misfit who no one takes seriously and yet who has a wisdom and insight into everyone he meets and everything he sees. He also has a keen sense of humor and I enjoyed his banter with Paula. When she reveals to him who she really is they develop a kindred soul type of bonding. Together they help Hiram get to the bottom of Coxbury’s messy past and the still unresolved mysteries surrounding Evelyn’s death.

INNOVATIONS:
Despite all the trappings of what appears to be yet another woman in peril thriller mixed with an amateur gentleman as detective plot, Dangerous to Me is ultimately a treatise on “crimes worse than murder” and the terrible effects they have on the small-mindedness of small towns. Foley uses the conventions of a detective novel to explore -- sometimes penetratingly, sometimes too melodramatically -- the consequences of judgmental behavior, prejudices that turn to hatred and the dangers of vigilante style groupthink.

Despite the negative press Foley gets as a poor writer (see this unfairly negative review from 1001 Midnights) I have found that she is a great plotter as well as an imaginative and insightful writer with intelligent ideas. I'm planning multiple posts of some of her more unusually plotted novels as well as her scarcer titles published under her "Dennis Allen" pen name.

QUOTES:
"What I am driving at is that the people who cause most of the trouble in the world remain unpunished—hell, sometimes we hail them as great men – but Lenny had paid with twenty years of his life for killing Evelyn Dwight."

"I seem to have a talking jag. I must be high as a kite."
"You are," Paula assured him.
"That’s the little woman. Running true to form. Are you a descendant of Carrie Nation?"
"No," Paula snapped, "but right now I wish I had her ax."
"It wasn’t an ax, it was a hatchet. You are thinking of Lizzie Borden."

"I’ve always told Hiram that he has all the domestic virtues of a man-eating shark."

"There’s only one person who has been dangerous to any of you from the beginning." He looked from face to face. "Yourselves. You hated Evelyn and you wanted her dead."

THE AUTHOR:
Rae Foley is the most recognized of three pseudonyms used by Elinore Denniston, a prolific writer of both fiction and non-fiction. She began her crime writing career in 1936 as “Dennis Allen” and wrote four novels under that name over a ten year period often drawing from the private eye tradition. Her first book as Rae Foley is the exceptionally scarce No Tears for the Dead (1948). She continued writing a variety of Mignon Eberhart type “woman in peril” thrillers as well as traditional detective novels and romantic suspense well into the late 1970s. Sadly, because most of her books were reprinted in paperback with Gothic Romance looking covers she has been mistakenly pegged as a Gothic writer. I have yet to find a single book that comes close to what most people think of as Gothic. Foley’s novels tend to be interesting twists on traditional detective fiction and psychological suspense with a smattering of social criticism in her late 1950s and 1960s books.

Most interesting to me is her life as a non-fiction writer. Denniston worked for decades as the assistant to theater impresario and pioneering producer Theresa Helburn who as the director of Theatre Guild was responsible for inventing modern musical theater. Helburn suggested that a previously produced Theatre Guild play called Green Grow the Lilacs be turned into a musical and hired Richard Rodgers to do that. He came up with Oklahoma! She did it again when she suggested a little known play by a Hungarian writer be musicalized and Rodgers and Hammerstein created Carousel from that script. In the late 1950s Denniston helped Helburn complete her theatrical memoir A Wayward Quest. Working alongside Helburn, who had an infectious love of theater as both a performing art and literature, must have left its mark on Denniston. The Rae Foley mysteries are filled with theater references and playful literary quotes from Shakespeare while actresses and actors are often her main characters.

Later, Denniston was hired as assistant and Dictaphone transcriber to Eleanor Roosevelt while she was working on her memoirs in preparation for an autobiography. When mainstream romantic fiction writer Emilie Loring died her two sons asked Little Brown & Company to hire a ghostwriter to complete several unfinished manuscripts. Denniston was that writer and she wrote four books as “Emilie Loring.”

EASY TO FIND?
Rae Foley’s books are all out of print and less than half are easy to find. Copies of Dangerous to Me are rather scarce in any edition. Your best bet for this title is a $2.99 paperback currently offered on eBay in an auction (People still use the auction option!). Most copies of her books offered for sale come in beat-up used paperback copies with those silly Gothic romance style covers or in large print editions from Thorndike. Assiduous searching for the scarcer early titles sometimes turn up reprints in three-in-one volumes put out by the long defunct Detective Book Club. At one time the Rae Foley books were very popular in the US as reflected by the numerous paperback reprints. If you live here you ought to be able to find some of her books in your local library. That is, if they haven’t been culling the shelves lately.