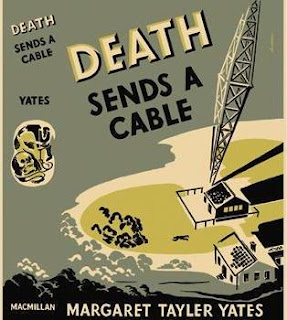 THE STORY: Dr. Hugh McNeal, Navy physician and his wife Navy nurse Anne Davenport McNeal have been stationed in Guantanamo Bay in Cuba where the Navy runs a telegraph station in cooperation with the American Cable Company. "Davvie" (the nickname Anne prefers) has been comforting a Navy widow grieving over her husband's recent suicide, but May Patterson is convinced that her husband Tom was murdered and that his death is related to the accidental death of another navy officer who drove off a cliff a few weeks earlier. Things get more complicated when an undercover FBI agent shows up to investigate both deaths after Mrs. Patterson leaves the naval station, heads back to the mainland and complains to the US government.  Davvie starts poking around, asking lots of questions and uncovers officers in disguise, possible German spies, coded telegraph messages, a plot to steal a resident mathematician's formula, and the truth about the two suspicious deaths.

THE CHARACTERS:  Apart from Davvie and Hugh, our lead married couple, there are only a few standouts in this very large cast. Probably because Yates finds it necessary to populate her navy base with as many possible variations on a military married couple the book often seems crowded and it's hard to focus on who you should be paying attention to.  But after the long expository first third of the book with the barrage of character introductions, relationships, friendships and other basic info the reader can settle into the story of the investigation which deals primarily with two FBI agents, Davvie and Babs van Born, niece of a rigid Navy officer.

Babs is 22 years old, seems and acts much younger, and ostensibly appears merely a babysitter/nanny for two rambunctious trouble-making boys of a snobby navy couple. She is presented at first as a starry-eyed dreamer but will turn out to be the most formidable of the gaggle of adventurous and courageous women on the base. Another standout is Bill Duncan about whom I cannot say too much without ruining some of the genuine surprises in Yate's tricky and rather complex plot.

The rest are pretty much stock characters, especially the many stodgy military men. Among the other women characers Kay Brewster, a slangy smart aleck who never seems to have a serious thought in her head, was one of my personal favorites. She doesn't seem real at all, like your favorite supporting character on a sit-com, but she has all the best lines and is often hilarious with her stinging comebacks.

INNOVATIONS: Death Sends a Cable (1938) is Yate's second mystery novel but it turns out to be more of an espionage thriller.  I have not read any of the other books in the short series, though I do have a copy of the fourth book set on Pearl Harbor which uses the Japanese attack as part of the plot.  I'm guessing that since these are military mystery novels set just before and after the start of World War 2 that spies and espionage are featured in most of the plots. Though Yates uses the framework of a detective novel in trying to uncover the truth behind the supposed suicide and the car accident the whodunnit element takes a back seat to all the spying, role playing and secretive gathering of information. The book is filled with several well done action set pieces with the final third becoming rather cinematic as the heroes and heroines race against time during the onset of a tropical storm that threatens to become a hurricane.

For the most part the book reads like many mystery novels written by women during this time period. The female characters are the strongest in the cast, their dialogue and scenes together tend to be a combination of chatty exchanges and catty gossip and there is a lot of lively wordplay and punning that on occasion gets a bit grating. Her style reminded me of Virginia Rath, Kelley Roos, Manning Long and other contemporary mystery writers who specialized in husband and wife couples who get involved in baffling and adventurous crimes. While Yates does have a clever skill with the frequent wisecacre banter, clearly inspired by Hollywood movies, it seems out of place and often the book seems to be emulating a movie screenplay. Kay Brewster, for example, reminded me more of a movie character than a person, the kind of woman that Eve Arden used to play in screwball comedies.

But when Yates is focused on the plot and the action she is in her element; the book comes alive and couldn't be more realistic and believable. Being part of a navy couple herself Yates knows the way military men and their wives think and behave and those portions of the plot make the book definitely worth reading.

QUOTES:  The [gossiping women] said her husband drank in the morning so he could face the food he knew he would get at noon.

"Bull" Durham had heretofore been merely one of my favorite cable men; now he was a young magician who must, I felt, sleep on thunderclouds and eat shredded watts for breakfast.

Some country wanted that formula -- wanted it badly enough to plant agents in our most secret port. There probably isn't another country in the world, I thought, where this would be possible. We shout in the headlines of our isolation until we confuse the term with impregnability. Even in the last war, when we woke with surprise to find our country honeycombed with already well-established spy systems, didn't teach us anything. We cleaned them out and left the door wide open for their return. 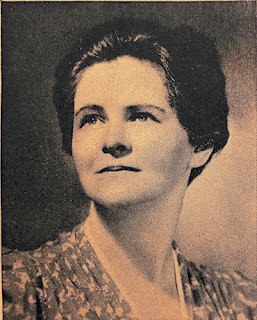 THE AUTHOR: Margaret Tayler Yates (1887-1952) was born in Riverside, California and spent her early career as special correspondent for the New York World while living in the Philippines with her husband, Navy Commander R. R. Yates. In 1941 she and her husband were stationed at Pearl Harbor at the time of the infamous Japanese attack. She was sent back to the mainland and settled temporarily in New York while her husband remained in Hawaii. According to her bio on the dust jacket of Murder by the Yard she had two sons and a daughter; the sons were both in the Navy and her daughter was married to an Army Air Corps lieutenant colonel.