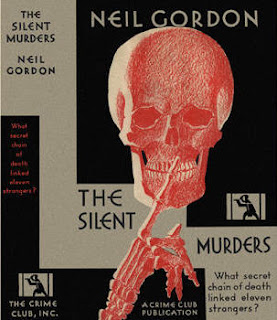 THE STORY:  Inspector Dewar and Superintendent Bone are faced with the enigma of a series of murders where at each crime scene the body has been tagged with a numbered piece of cardboard. When the book opens victim #3 has been found. All the men are middle-aged, some have been stabbed, most have been shot by an air rifle that scores the bullets in a peculiar way. What can they possibly have in common besides their age, the murder method, and the numbered cardboard tags? When the linking element is found the policemen find themselves in a race against time to identify the potential victims from a brief list and prevent the last of the murders.

THE CHARACTERS: Dewar and Bone are a great team. Bone is the senior official and he enjoys razzing Dewar for being both very young (only 32) and Scottish. He constantly jibes Dewar about his hometown of Dumbartonshire often referring to his junior as "Dumbarton", always in a friendly joshing manner. He is respectful and impressed by Dewar's abstract thinking and his gifted detective's instinct. It is only because of Dewar that they literally uncover another murder while investigating the truth behind the serial murders.  It's one of many clever layers to this intricate plot.

Dewar though the junior member of the team is clearly the lead detective of the novel.  He is driven and dedicated to his job. A single man who eats, sleeps, and breathes police work he is well liked by all his colleagues. And it's largely because of the mutual admiration between Dewar and Bone that this detective novel which relies heavily on methodical police work never lags interest and never suffers from "procedural" monotony which is often the case with this subgenre.  We never have to watch these men fill out paperwork, talk about the bureaucracy that stalls their work, or any of the other less glamorous aspects of police work. They are on the hunt, they mean business, and they most definitely get their man.  In fact they get their man about three times in this wildly, fast-spinning and ever changing pursuit of a relentless killer hiding amongst many criminal types. 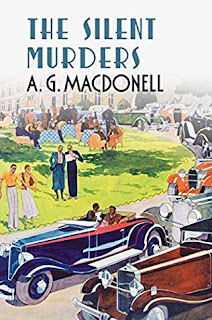 INNOVATIONS:  One of the earliest of serial killer novels The Silent Murders (1930) still seems very modern because it uses as the major thrust of the plot the now familiar motif of looking for patterns. But not analyzing the killer's psychological profile, rather looking at the lives of the victims for a connection to warrant such mass murder. Unlike other tales of multiple murder of the Golden Age in which the acts are horrifyingly random and committed by a lunatic The Silent Murders has a murderer with a clear cut, understandable motive unshrouded by psychopathology and free of any baroque hidden meanings. He may be leaving calling cards counting out the murders, but that is the extent of the adornment, so to speak. The police work is entirely focussed on trying to find an underlying connection between all the victims.  It's rather baffling since two deaths occurred in Canada, one of the victims was a tramp, and two were high-powered, prominent British businessmen. The police are forced to dig deep into the past and they hit the jackpot with a business deal in South Africa that took place around 1907, twenty-five years prior to the events of the novel. The case seems almost at an end until their prime suspect flees along with a servant.

The plot shifts to a pursuit for their suspect, but a truly surprising event at about midway through the book causes the entire case to fall apart and Dewar and Bone must start from scratch. When that happens there is a very subtle element of fair play clueing is dropped allowing the reader to figure out the killer's motive for the seemingly unending mass murder. I am proud to say that it dawned on me literally two paragraphs before Inspector Dewar announces it. It's an invigorating moment whether the reader guesses before Dewar or not for it also comes as the recognition that this may in fact be the very first book ever to employ such a novelty plot element in a detective story.  The characters talk about the motive with such alarming horror that it seems totally fresh within the context of the story even if it is now a tiresome cliche in the genre as a whole.

QUOTES: Dewar: "Where does a harmless Methodist tradesman who's never been farther from Reading than Lyme Regis connect with a gang of murdering cutthroats and [diamond brokers] and gunrunners from Jo-burg and Angola and Belgian Congo?"
"Most eloquently put," said Bone, "and quite unanswerable."

The quietness and simplicity of it were terrifying. No one had seen a figure approaching the victims. No one has seen a figure hastening from the scene of the murders. ...each murder committed with ruthless efficiency and each retreat effected without fuss or hurry.  "Like a cat in the night hunting a bird," thought Dewar.

THE AUTHOR: Neil Gordon is one of two pseudonyms used by Archibald Gordon Macdonell when he was writing detective and thriller fiction. Macdonell began his writing career as a journalist, writing mostly theater reviews for London Mercury.  In 1933 his novel England, Their England received the James Tait Black Memorial Prize, and it is this book for which he is most likely best remembered. Another satirical novel The Autobiography of a Cad (1938) has garnered something of a cult reputation lately. In addition to novels and a handful of plays he wrote at least one book on military history. As "Neil Gordon" he wrote five detective novels; a Buchanesque political thriller called The Factory on the Cliff (1928); and The Bleston Mystery (1928) done in collaboration with Milward Kennedy, one of the founders of the Detection Club. Under the pen name John Cameron he wrote two other detective novels with similar sounding titles: Seven Stabs (1929) and Body Found Stabbed (1932). In 1941 Macdonell died unexpectedly at the age of only 45 in Oxford.

EASY TO FIND? Luckily, yes! (From now on I will only be including this section when the answer is positive.) Many of Macdonell's novels have been reprinted by Fonthill Media, a British indie press known primarily for their line of military, aviation, and maritime non-fiction. Only two of the Neil Gordon detective novels were reprinted and have been released under Macdonell's real name -- The Silent Murders and The Shakespeare Murders. Currently all the Macdonell books are offered at 20% off the original retail price if you buy them from the Fonthill Media website. For anything else you'll have to resort to used bookstores, both online and the few remaining brick and mortar stores out there.
Posted by J F Norris at 12:00 AM