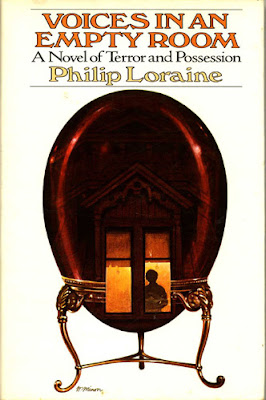 THE STORY: Psychic experiments, decades old family secrets, ghostly possession, a forgotten crime... Something strange is happening in the house at 337 Gilman Street in San Francisco. Ellie Owen Spencer and her brother Richie have rented the main house to two women who every night conduct psychic experiments with the spirits of Ellie's ancestors. She and her brother know nothing of what's going on in the house ever since the took up residence in the adjunct coachouse. But then Ellie starts calling her brother and fiance John Lamb by the name Michael. When one night Ellie will not stop writhing on her bed in an apparently paranormally induced sexual ecstasy repeating the name Michael in a dark reverie John and Richie turn to Dr. Hillier for help. The mysteries are only beginning. What exactly happened in the house so long ago? What are those women up to? Are they responsible for what appears to be a case of spiritual possession?

THE CHARACTERS: Voices in an Empty Room (1973) is told from multiple viewpoints. John Lamb is the primary story teller, but Loraine has divided his book into four cleverly constructed sections that allow him to shift viewpoints and alternate plot lines among the cast of characters. The main plot seems to be about the mystery surrounding Ellie's sudden personality transformation and how this affects the burgeoning romance between John and his fiancee. But Loraine adds more to his labyrinthine story.

A second storyline follows the weird ghostly communications manifested by Lulu Jenkins at the behest of Amelia Guardi. Lulu is a bona fide medium with clairvoyant powers, she can see and hear then vocally recreate scenes from the past by channeling various spirits, and yet also predicts the future. She had these uncanny abilities since she was a child. But she is not the brightest bulb in the chandelier and has been easily manipulated by keener, more intelligent people like her former husband who was eager to make a quick buck off of her supernatural ability. Mrs. Guardi, a wealthy woman from Boston who has come to San Francisco to write a book about spiritualism, takes advantage of Lulu's acute powers in an effort to collect proof of life beyond death and that communication with the dead can indeed benefit the living. She is planning to write a book on the subject and gain fame, if not notoriety, in peeling back the veil that separates the living from the dead. 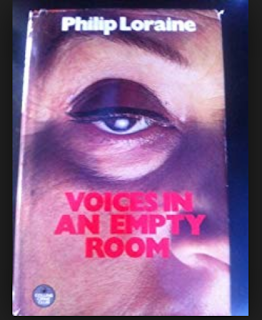 The strong contrast between the two women is handled masterfully and not without a sardonic wit and frequent ironic jabs. It is clear that each will pay dearly for their experiments in the paranormal and mucking about with concepts and events they have no control over. Lulu, a pathetic portrait of wasted talent who is victimized and exploited by corrupt individuals, is not without one fine moment of heroism. In one of her best scenes Lulu's transformation from mouse to lion is triggered by a nearly forgotten memory. Mrs. Guardi repeats a line uttered by Lulu's con artist husband just before he stole her savings and abandoned her. It's a perfect moment, but is ultimately one tinged with irony and failure.

Richie, Ellie's brother, seems initially to appear as a comic character. He's a typical caustically witty queen who turns up in 1970s pop fiction from writers who wanted to appear hip by tossing into their books a token gay character. That Loraine insists on referring to him as a homosexual throughout lessens the intended humor and yet Richie really does have most of the best lines. Luckily, Richie proves to be a firebrand in a couple of key scenes. Hell hath no fury like an angry gay guy. Don't mess with Richie, especially when he's doing his damnedest to save his sister from a hellish malady.

Dr. Hillier, the family physician guarding too many family secrets, and Godfrey Bellfort, the brother of the deeply troubled Stella Bellfort Spencer whose spirit is living again through Lulu round out the cast. Each of these men is as finely drawn as the lead characters and each has striking moments of importance related to the multi-layered story. 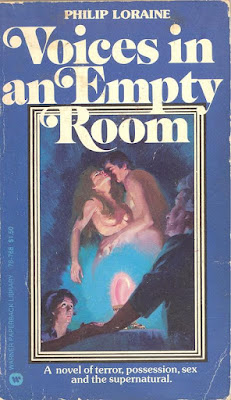 INNOVATIONS: Loraine has divided the book into four separate sections: The Living, The Psi, The Dead, The Coming Together.  As each title suggests the story progresses from an expository first section introducing us to the main players, then adding in the supernatural elements in the second section (psi is a term used both by the parapsychology world and pop culture to collectively refer to psychic phenomenon). The third section further develops the plot when the book turns into a literary detective story as John and Richie delve into the archives of the Lilienthal library and we are given a richly detailed history of the Harold Spencer and Owen Spencer families and the incidents that led to a covered up crime. Finally, in the last section the past and present plotlines converge culminating in a unexpected twist followed by the grisly and bloody finale in a suitably Grand Guignol style.

Voices in an Empty Room is one of the better supernatural novels to come out of the 1970s when books featuring psychic powers and demonic or ghostly possession exploded in popular fiction and dominated the shelves of the newly created Horror sections in bookstores. Drawing on the motifs and conventions of Victorian sensation and Gothic fiction Loraine has written a tale of madness, ghosts, and corporeal possession that seems less a story of 1973 than one more suited to the era of its influences. He contemporizes these motifs with an ample amount of sex (example: Ellie's possession by the ghostly Micheal is triggered by a lovemaking session with John) and topical references, but the emphasis on family honor, closely guarded secrets, and the preservation of the fabricated story of a troubled relative's life is far removed from the hipper themes of most 1970s novels.

Nevertheless, Loraine's masterful talent in storytelling and his often incisive writing hold sway over the reader. He has structured the novel in such a way with his alternating storylines and slow revelation of multiple secrets that the reader is compelled to move on anxious to get to the end. This page turning frenzy is coupled with the delivery of a truly surprising eleventh hour shock. 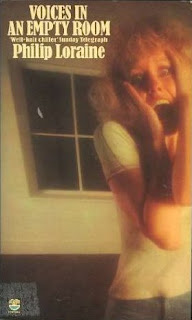 QUOTES:  Lamb had always believed that any city worth loving must not only be beautiful but full of interesting looking people, with a dash of eccentricity; San Francisco was well endowed with these virtues. He liked a city to be capable of instant generosity, as well as of reserving more secret and more intimate pleasures for those who will love her more deeply...

...the whole persona of this sibylline apparition scared the hell out of [Ellie]; and at the same time she was sure that unlike other people who used the expression "Believe me, I know," Mrs. Jenkins was speaking the exact truth. There was no doubt in Ellie's mind that she did know--but what? It seemed that this question was going to remain forever unanswered...

Mrs. Guardi was a woman who made careful plans and carried them out to the letter and to their conclusion. That there was something almost manic in her determination did not worry her; in this flabby and directionless world, it was the only way to get things done; it was true that occasionally other people had to suffer, but then people had always had to suffer for any great cause.

EASY TO FIND? I found several copies for sale of both US and UK editions,  hardcover and paperback. Most of them are affordably priced. Only a few of Loraine's books have been released in digital editions, but not Voices in an Empty Room.
Posted by J F Norris at 11:39 PM