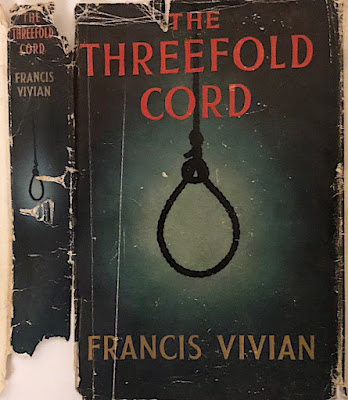 THE STORY: Horror of horrors! Someone has done in poor Mildred Manchester's pets. First her beloved budgerigar Sweetums and then her cat. Both were savagely strangled and loosely wrapped around the neck of each animal was a blue silk cord. Are these warnings that a person is next on the list? Mildred's arrogant husband Fred, a wealthy furniture dealer, demands that Scotland Yard investigate not trusting the police of his local CID who he deems incompetent. But before Inspector Knollis can even set foot on the Manchester premises he gets word that the furniture dealer has been brutally butchered with an axe, his nearly decapitated corpse found in the greenhouse containing his prized cactus collection. And stuffed into of Manchester's jacket breast pocket -- a blue silken cord.

THE CHARACTERS: Gordon Knollis is the detective created by Francis Vivian and he's one of the more interesting of the humanistic detectives. He treats everyone with decency and compassion though he may tend to lose his patience with reckless drivers like young Sir Giles. The Threefold Cord (1947) is his third case and proves to be both macabre and puzzling. Undaunted by the odd clue of the blue ribbons and the prelude of the pet slaughter Knollis quickly gets to the bottom of a murder case that stems from someone's haunted and scandalous past. He's a detective who stands out as a real hero as well as a fine sleuth and he makes the book all the more exciting for his presence. 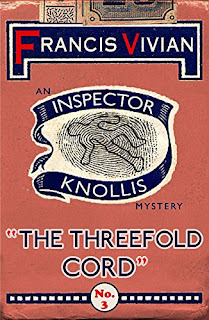 Among the suspects are a trio of servants (chauffeur, maid and cook/housekeeper) who unlike in most of the formulaic whodunnits of this era are not relegated to the background or offered up as comic archetypes. Rather all three are integral to the plot and solution of the various crimes. The maid, who is in love with the chauffeur, provides some crucial eyewitness testimony and evidence that help Knollis discard some theories and lead him to the correct culprit. Also a stand out is the haughty actress Dana Vaughan, who puts to shame some of Christie's finely drawn actor/actress characters in terms of ego and vanity. Miss Vaughan is starring in a psychological thriller called The Hempen Rope and it will feature prominently in the solution of the crime. Strangulation also occurs in that play. Vaughan is so intense an actress, and the role so torturous to perform, that she suffers from sleepwalking episodes during which she reenacts the strangling scenes. The latest such unexpected victim of one of her "spells" was her dresser at the theater. The play, Knollis will discover, is also coincidentally based on true life and borrows heavily from the past life of one person among the list of suspects in Manchester's murder.

INNOVATIONS: Though nothing really stands out as innovative Francis Vivian's plotting is intricate and his storytelling talent is remarkable for being humorous, engaging and a challenge to any reader who likes to match wits with the fictional detective. Fair play clueing is competent if not stellar or ingenious. Vivian's strengths are his characters and his lively wit, something I think that most detective novels are lacking in and an aspect of mystery fiction I find more and more to be almost imperative.

QUOTES: "You ask very impertinent questions, Inspector."
Knollis nodded as he turned to the door. "Yes, Miss Vaughan, but you must remember that Death has no manners as a general rule. In this instance he was a reformed character, and knocked twice before entering."

"When I left the station I was astounded by the way in which Londoners rushed about, as if the bus coming up the road, or the Tube train coming out of the tunnel, was the last one for hours instead of the last one for two minutes. I felt sorry for them allowing themselves to be caught up in such an idiotic race. Two days later I discovered myself running down an escalator to catch a train that wasn't even signalled in. Silly, isn't it? One sheep goes though the gap in the hedge, and all the others follow. There's a moral in it somewhere."
"Yes. I'm afraid that the human race is more notorious for its stupidity than for anything else. [...] We seem to be rushing to destruction as fast as our legs can take us."

THINGS I LEARNED: On page 133 Knollis, frustrated with his inability to think quickly of the significance of the blue color in the silken cords, cries out "I need a Brewer!" The policeman he is with is puzzled and jokingly replies, "If you need a drink to stimulate your brain..." Then Knollis elucidates: "I mean Brewer's Dictionary of Phrase and Fable." This is a reference book that has been in print since its original publication in 1870, but is a book of which I knew nothing. The dictionary is a mammoth volume, the culmination of a lifetime of research into folklore, mottoes, slang and phraseology from everyday life. The author was Ebenezer Cobham Brewer (1810-1897) who is also known for Guide to the Scientific Knowledge of Things Familiar (1841) and an unusual history book aimed at youth and written in rhyme and verse called Poetical Chronology (of Inventions, Discoveries, Battles, and of Eminent Men, from the Conquest to the Present Time...) (1853). An example from the book: "One-thousand-sixty-six from France the Norman CONQUEROR came/And 20 years by rigour sought the British soul to tame." For more on what can be found in Dictionary of Phrase and Fable as well as a brief biographical sketch on Brewer and his awesome research see this fascinating blog post on the Cambridge Library Collection website, the publisher who still keeps Brewer's work in print.

EASY TO FIND? Yes, indeed! (Aren't those two lovely words to read in this section?) In fact, in three days you can buy as many Inspector Knollis mystery novels as you want because all ten of them have been reprinted by the estimable Dean Street Press. And I'm sure that all of them contain a knowledgeable foreword by Curt Evans chockful of all sorts of biographical nuggets on the author and critical insights into the Knollis series. I checked the US amazon site and so far all of these books are available in a Kindle edition, but I found only a few in paperback editions for purchase in the US. If you live in the US I'd recommend going to Book Depository to get a paperback edition. All ten titles are available there as print books and they have free shipping at all times. The prices on Book Depository also often tend to be cheaper than amazon sometimes as much as five dollars less.

I've purchased three of these reprints and am eagerly awaiting their arrival in my home. In the meantime I'm preparing a review of the penultimate Knollis mystery Darkling Death for a post to be published in October.  Stay tuned for more about Inspector Knollis and crew! 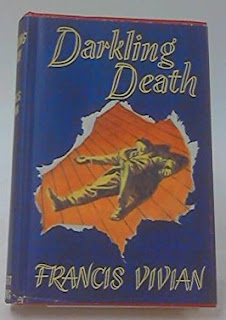