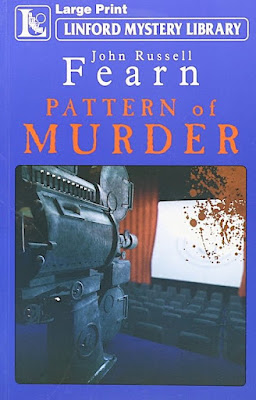 Any fans of Columbo out there? Of course there are. Well, let me point you to your next required read:  Pattern of Murder (1957) by the ambitious and prolific John Russell Fearn. Decades before Link and Levinson dreamed up their wily, cigar chomping police lieutenant who matched wits with egotistical murderers foolishly content with their supposed perfect crimes Fearn wrote this masterful example of the inverted crime novel. Like the best Columbo episodes Fearn's novel is chockful of specialized background info.  In fact, while reading Fearn's book I could not help but remember an episode featuring Trish Van Devere (George C. Scott's one time actress wife) as the killer whose supposed alibi is tied to her knowledge of how movie reels are changed in a projection room.  For that's exactly what is featured in all its mechanical marvel in Pattern of Murder. The two main characters Sid and Terry work in a movie theater and run the movie projectors.  A minor character who provides some key info is their assistant who tends to do nothing more than cracks jokes and rewind all the spools of film in the rear of their projector rooms.

What makes this book even more remarkable is that it is both an inverted detective novel AND a traditional detective novel.  As with the inverted form we are privy to a killer's murder plan. Here it is gambling addict Terry who plots a gruesome and fiendishly designed deathtrap for an usherette who knows he is a thief and is threatening to expose him.  We have little sympathy for the victim Vera, however, because she too is a thief!  She stole two hundred pounds from Terry the day he lost a bet at the race track and that loss drives him to steal from his employer. He threatens Vera with exposure too. They seem to be at a sort of Mexican standoff, each waiting for the other to make their move.  Terry decides he must carry out his murder plan and yet as we watch him plan it and rehearse it (!) there is much that occurs that he never anticipated. 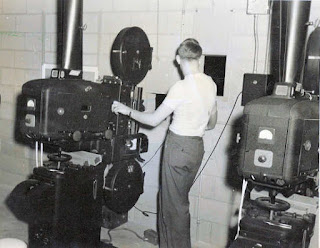 Sid was Vera's boyfriend and he can't understand Terry's callous attitude after her death. Terry, after all, was friendly with Vera and the two went off to the horse races a few weeks before her death. But then the theft occurred. Was Terry responsible for that?

Assisted by his movie theater co-workers Sid comes across oddities that make him question what the coroner and police seem to think was a bizarre accident. What happened to the glass tumbler in the bathroom Sid and Terry use? Why did Terry claim the film broke just prior to the accident? Why did he also jam his hand into the projector claiming he was fixing the film? Why did the short travel film go back to the movie distributor with a ruined soundtrack when the main feature that followed the travel short was perfectly fine? Sid becomes the amateur sleuth and puts it all together. Then it's a game of cat and mouse as Sid tries to prove Terry a killer while Terry tries to outwit Sid.

This is a fascinating book on so many levels -- the mix of traditional and inverted detective novel plot techniques, the eye-opening world of a 1950s movie theater business, and the ingenious murder method employed -- all of it adds up to a truly engrossing, page-turner. If you must choose to read only one mystery novel by John Russell Fearn, then this is it. It's quintessential Fearn - some of his best plotting, his love of scientific detection, arcane background info and an exciting, fast paced story. 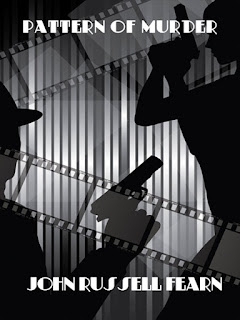 Pattern of Murder is available as a digital download or paperback book from Wildside Press as well as paperback copy (albeit a large print edition) from Linford Mystery. There are many used copies all priced cheaply of the Linford edition, almost all of them ex-library editions, for sale on multiple bookselling outlets in this vast digital shopping mall we call the internet.

In a bit of a role reversal I have chosen to be very bare bones about this book. If you want more detail about the story and Fearn's life as both a cinéaste and a movie projectionist then read TomCat's meaty post on Pattern of Murder.  He is the vintage mystery blogosphere's #1 JRF fan and like me he found this to be one of Fearn's best mystery novels.
Posted by J F Norris at 9:51 PM