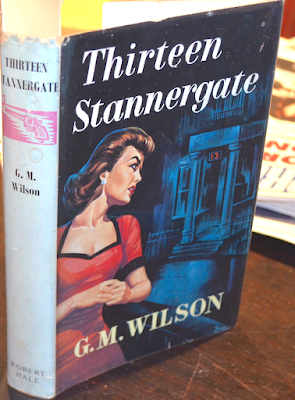 THE STORY:  Someone asks Kate Wheeler for directions to 13 Stannergate and though Kate has never been in this town before she somehow knows exactly where the house is and what it will look like. She can even describe the way house looked decades ago, long before she was born -- from the ivy on the outer walls to the wallpaper in the previously locked and shuttered attic. It's that attic that Kate is drawn to, it's been renovated and waiting for a new lodger. She is compelled to rent the room for her new home. But Kate seems to remember something about the window that she dare not go near, let alone touch. And who was Miss Joanna she seems to think was in the room? Is Kate the reincarnation of a former occupant of the room -- a maidservant from the 19th century who committed suicide by throwing herself out the window?

THE CHARACTERS: Thirteen Stannergate (1958) is the third book in a series of supernaturally tinged detective novels featuring G.M. Wilson's pair of policemen -- John Crawford (a prototype of Fox Mulder) and Inspector Lovick (the skeptical Dana Scully of the duo) -- who have an uncanny knack of uncovering weird crimes with seemingly paranormal events surrounding them. "More spooks!" Lovick scoffs yet again. Not at all what he needs ever since he dealt with a haunted mansion and a cursed fireplace poker that killed without any human agency (Bury That Poker, 1957). Lovick is not at all convinced that Kate has some psychic connection with the past occupants of the house and is sure she has seen photographs of the place or visited it before despite all her protestations to the contrary. When Kate has a near fatal accident falling out the same window in the attic she dare not go near. A mere fall or was she pushed? Richard Clare, who bears a striking resemblance to his ancestor Charles, was in the room with Kate when she fell. Witnesses claim he pushed her while he says he was trying to pull her away from the window. The story enters the realm of the eerie when we slowly learn the story of Charles, the maid Alice, and Miss Joanna and the love triangle that led to Alice's death. Charles apparently was responsible. Kate is not only convinced she is the reincarnation of Alice but that Richard is the new form of Charles and that they are doomed to repeat the past.

The house at Stannergate is packed to the roof with oddballs and suspicious types. There's Mr. Geddes the self professed "pedigree hunter" whose obsession with genealogical leads to his uncovering the complicated past of the Clare clan. Ancient Mrs. Clare, the invalid owner of the house has developed a maternal liking to Kate and may be changing her will in Kate's favor, but is wary of the girl's eerie powers and knowledge of the past.  Lee and Lucille Burney are a caustic married couple. He's a portrait painter and she's a direct descendant of the Clare family with an interest in keeping the house in her name. Kindly Miss Doveland is a spinsterish ex-schoolteacher who becomes Kate's guardian and confidante in her time of trouble. Lil Webster is the manager of the house who along with the usual cadre of gossipy servants provide all sorts of juicy tales about the boarders at 13 Stannergate. One of these people is a would be murderer who is determined to end Kate's life. Greed, jealousy or revenge - which of these is the murderer's motive? Will the police uncover the killer and prevent a second and fatal attempt on Kate's life?

INNOVATIONS: Wilson is masterful at creating tension and developing a creepy atmosphere in her detective novels. This has a very Gothic feel in the true sense of the word, absent of any HIBK trappings that could ruin the tone. Kate is only 19 years old but never comes across vapid like most of the ninny heroines one finds in neo-Gothic suspense novels. John Crawford is aware that Kate is unusual, that she may indeed have a sensitivity to the house's history, an extraordinary way of picking up cues from the past if not possessing an actual paranormal ability. He says anyone would be stupid not to admit that aspect of Kate's fragile mindset and her ability to drift in and out of the past and present so easily. Some of the characters, however, exploit this fact by managing to slyly manipulate the truth in order to make it appear that Kate is mentally ill. Lucille Burney, in particular, comes across as the most sinister of the boarders. For many chapters Wilson builds up a good case of Lucile being the guilty party. But it could never be that obvious ...or could it? 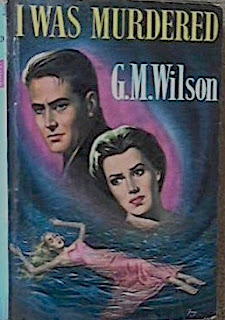 Unlike her previous two books (Bury the Hatchet and I Was Murdered) the element of supernatural in Thirteen Stannergate is not overt. The ambiguity surrounding Kate's apparently psychic powers and knowledge of events from the long past are always open to rational explanation. Until, that is, two uncanny events happen unexpectedly.

Unfortunately, Wilson has a tendency to have her detectives talk about the conventions of mystery novels in her books. I wish she didn't have Lovick say one sentence in this novel. Had he not uttered those words I would never have suspected one character. Because of that one stupid line the ending is fairly ruined. It's an act of self-sabotage that Wilson was probably unaware of. Or maybe she thought she was being clever with a double bluff. It didn't work with me, if that was her intent.

QUOTES:  "...one never knows what may be of use till one has uncovered it. That's one of the fascinations of [genealogical] research, the most enthralling by-ways to be explored at every turn with who can tell what treasure lying at the end of them."

Lucille Burney was a dangerous woman. Jealousy and spite lay very near that over-painted, over-powdered surface...

If Alice Dobson had committed suicide, then the impulse, the "badness" remaining in this room, had been directed towards self-destruction, and it was more than possible that Kate had been driven to attempt death in the same way. But if Alice had been murdered--

Murder waiting here in the hours of darkness... Murder perhaps not by a human hand, not even by a dead hand, but by an influence so powerful that it had created the physical sensations as well as the emotions of that [previous] tragedy. Once the borderline of normality was crossed, anything was possible.

EASY TO FIND? Sometimes I feel I should just skip this section. That's right. Another extremely scarce book. Apparently I bought one of only two copies available in the past two years. That second copy -- the one with the DJ shown above-- is now gone. Someone shelled out a lot of cash for that book, if I recall the listing properly. So sadly there are zero copies for sale from the usual online bookselling sites as of this writing. I suggest hitting up Worldcat.org and checking out library holdings.  Most of Wilson's books are not only difficult to find in used bookstores they seem to have vanished off the face of the Earth. I'd like to see all of them reprinted and would like to get a word out to Dean Street Press. Are you reading this, DSP?
Posted by J F Norris at 1:00 AM