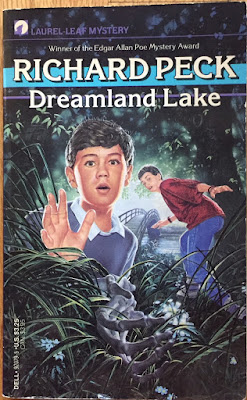 THE STORY: Philip "Flip" Townsend and Brian Bishop, two teen boys guided by a dated book on the history of their hometown Dunthorpe, Illinois set out to find and explore an abandoned amusement park near the shores of Dreamland Lake (1973). To their horror they stumble across a skeleton and they make the local newspapers and receive celebrity status for a few weeks as adventurers. They continue to return to the ruins of the amusement park and discover some sinister artifacts and a weird shrine decorated in swastikas. With a new found tag-along friend Flip and Brian will be forced to confront the fragility of friendship, the stigma of being ostracized and the inevitability of death.

THE CHARACTERS: Flip and Brian are perfectly realized 1970s teen boys. They talk and behave like thirteen year-olds and the adults around them seem just as real. I can speak from authority here because I was thirteen myself in 1973, the year the book was published. The entire story rang true with an astonishing resonance that at times it seemed as if Peck had stolen glimpses from my own life. Everything from their slang, their past times like a very 1970s obsession with old time monster movies on late night TV, the problems with finding a sub for Flip's paper route when other activities take precedence and even their hero worship of a twenty-something athletic and down-to-earth swimming coach -- all of it was spot on. The two boys never once seem older than their years and in fact get a healthy dose of life lessons from Peck's finely rendered adult characters like a teacher trying desperately to instill a respect for modern poetry in her students; Old Man Sanderson, an anal retentive curmudgeon typical of the bullying paper route customer who is out for blood any time Flip deviates from the rules of newspaper delivery; and Old Lady Garrison who I'll talk about in a section below. Not to be left out is the pathetic figure of lonely outcast Elvan Helligrew, a perfectly named misfit who is eager to become Flip and Bri's best friend. Elvan is willing to do anything to impress them. The two boys exploit Elvan for their own ends fooling the boy into thinking he has become "cool" in their eyes. But what happens to the three boys will have dire consequences for all of them and will be the most painful growing experience for Flip and Brian.

INNOVATIONS: Ostensibly a book written solely for a young audience, Dreamland Lake has the remarkable paradox of being a book so fully and truly realized as a microcosm of what is what like to be a kid in the 1970s that it seems almost like a novel of nostalgia. To a kid in 1973 reading this book probably would have seemed almost mundane with its everyday details like Flip's paper route difficulties or the dullness of being forced to compose a modern poem in English class -- called Language Arts in a typically 70s education reform re-labeling. But to an adult reader in the 21st century reading the book now was like the most vivid trip down Memory Lane. Interestingly, as Peck's writing career progressed he would become increasingly drawn to the past and one of his most successful books was an adult memoir he wrote of his own boyhood. In writing a contemporary book about boys growing up in 1970s Illinois, where Peck himself grew up, he had already mastered a kind of reality that few writers -- both those writing for adults and children -- ever really accomplish. 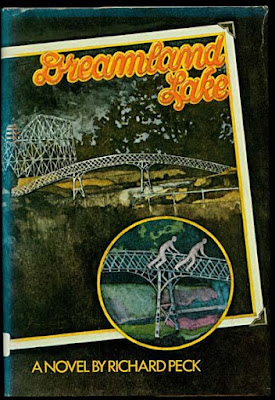 The mature themes of confronting the ugly truth of Life's finality, particularly unexpected death, is a topic that many 1970s children's writers were incorporating into their work. Often the topic of death in kids' books is ever so gently introduced into the story, sometimes cloyingly depicted and discussed. Peck talks openly about death in Dreamland Lake. The scene where the boys are invited to Mrs. Garrison's home and she relates the story of how she lost her son in a horrible milk truck accident is handled matter-of-factly and without a drop of sentimentality. Mrs. Garrison is not the typical wise old woman who pontificates on somber Very Important Subject Matter the way other writers would use a character like her. She's lived a comfortable life, still grieves for her son, and in telling her tale shows the boys that death is ever present. Better to get used to it at a young age, she tells them, rather than have to deal with it unprepared as an adult. You didn't get scenes like this in kid's books during the 30s, 40s, 50s and rarely in the 60s. The 70s were the decade when children's books were finally growing up.

I’m no real expert in what is now known as young adult genre, but I do know that when I was growing up children’s writers were only just beginning to tackle formerly taboo subject matter for children’s books like puberty, divorce, child abuse, date rape, racial inequality, and even -- as in Dreamland Lake -- facing one’s own mortality. Cute books about talking animals, stories inspired by fairy tales or similar tame "kiddy fare" were no longer making up the majority of children’s books. Children increasingly wanted to read about themselves and their very real problems. Gone too were the teen sleuths who chased after crooked real estate agents and avaricious treasure hunters. The teen protagonists were often criminals themselves – shoplifters, bicycle thieves, burglars and gang members. Flip and Brian engage in some less than legal activities themselves.  Richard Peck was definitely a ground breaker along with his fellow 1970s young adult writers Paul Zindel, Judy Blume and S. E. Hinton.

THINGS I LEARNED:  Flip and Brian talk about their days of swim classes at the YMCA where they were required to swim nude. Believe it or not, this was a national rule in the United States. Nude swimming was required of all males who used YMCA public pools from about 1926 to 1962. This was mandated by the American Public Health Association and thousands of high schools and middle schools that gave swimming lessons also enforced the rule of nude swimming for boys which continued well into the mid-1970s. Girls, luckily, were allowed to wear swimsuits in school swimming pools.  I had to find out more so I went a-Googling. As early as the 19th century when swimsuits were made of woolen textiles, fibers would clog the early filtration systems making for added work of cleaning them almost hourly. To alleviate this unnecessary, time consuming labor the rules about nude swimming were instituted. There were also some supposed added benefits that the APHA created in order to justify the lack of swimsuits in public pools. Prior to getting in a YMCA pool all men's bodies were examined for open wounds or indications of infectious disease. The changing social attitudes towards nudity in YMCA pools and the entire history of nude swimming in the US is outlined in a fascinating article you can read here.

THE AUTHOR:  Richard Peck was born and raised in Decatur, Illinois. He grew up during the Depression era with a father who owned a Phillips 66 gas station and a mother who instilled him at a very early age a love of reading and books.  He was educated at DePauw University, Exeter University as an undergraduate and Southern Illinois University and Washington University in St. Louis, MO as a graduate student. During the late 1950 she served two years in the US Army stationed in Stuttgart where he worked as a chaplain's assistant.

His first novel for young people was Don't Look and It Won't Hurt (1972) which addresses teen pregnancy and was later adapted as the movie Gas Food Lodging.  He has also covered such formerly taboo topics as stalking and the aftermath of teen sexual assault in Are You in the House Alone? (1976) which was adapted as a TV movie in 1978. This novel won Peck an Edgar Award for Best Juvenile Mystery. At the advice of some junior high school readers who he visited with he began to explore the burgeoning popularity of supernatural themes in his books for children. His first efforts resulted in a series of well received books featuring Blossom Culp, a girl with skills of a medium who acted as an occult detective of sorts. Blossom first appears in The Ghost Belonged to Me (1975) narrated by an older man looking back on his youth in 1904. While the book is reminiscent of a Mark Twain novel, complete with an alternating folksy and sarcastic humor, the TV movie adaptation Child of Glass (part of "The Wonderful World of Disney" anthology series) is decidedly different and updated to be set in the 1970s.

In addition to the Edgar Peck has won the Newberry Medal, a Newberry Honor, the Scott O'Dell Award for Historical Fiction and been nominated for the National Book Award. He died May 23, 2018 at his home in New York City following a long illness. He was 84.

EASY TO FIND?  Most of Peck's children's books have remained in print since they were first published, no mean feat for someone so prolific. Dreamland Lake can be found in numerous paperback editions dating from 1975 all the way to 2000. Each edition received multiple printings. His many books continue to be very popular in libraries all over the US and Canada. There should be no problem finding a copy of any of his books. Happy hunting!
Posted by J F Norris at 12:12 PM