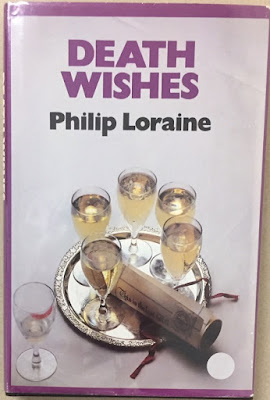 Unpleasant people. Unpleasant situations. You can’t escape them if you’re going to read crime fiction. I’m always amazed when I read a review of a crime novel that states the reviewer did not like the book because the characters were unlikeable, unpleasant, untrustworthy, and in general just UN-anything. Why bother reading crime fiction then? Nice people don’t steal, swindle, beat up, torture or kill other people. There are nothing but unpleasant people in Death Wishes (1983) one of Philip Loraine’s last books published in his lifetime. But just because these people are not nice doesn’t make them not worth your attention. This is one crafty bunch of characters and their two-timing and lying make for some fascinating reading.

Basically what we have here is another story about a group of avaricious relatives fighting for the estate of a wealthy patriarch who had little love for anyone other than himself. Edward Walden has one daughter, an alcoholic ex-wife now dead, and a couple of illegitimate children who will crop up during this twisty story of deceit and betrayal. His mistresses and their offspring as well as his servants are expecting to be the primary legatees when the will is read. Imagine their surprise when they hear that the entire estate is left to Catherine, his estranged daughter who has been living in the United States for over twenty years. The household is in a mild uproar and those who were apparently disinherited insist that there was a new will that cut out Catherine and left them the estate to divide into five equal shares.

Catherine who has traveled southern France to the Walden estate (but conveniently skipped out on Daddy’s funeral) finds herself the target of a couple of dangerous young men, their scheming mothers, and a wily butler out for himself. Who will find the correct will? And will Catherine survive the weekend before it turns up? I’ll say no more. Loraine has constructed a neatly plotted story, deceptively simple on the surface but teeming with background intrigues only hinted at in the first few chapters. But in the masterful, exciting finale those intrigues take center stage. All hell breaks loose with a furor of tempers flying, accusations of attempted murder, and a flurry of bizarre revelations and ugly truths finally exposed.

Short and sweet this week, eh? The only thing I’ll add in closing is that in this fourth to last novel of Loraine’s not only are the characters more base but so is his writing. Casual swearing crops up frequently as well as casual sex. Loraine decided to go whole hog with the unpleasantness. Those easily offended by F bombs in language and in the bedroom ought to look elsewhere for their entertainment. For me, Death Wishes hit the right notes of venal and criminal behavior on the printed page. Guess I was sick of niceness this past week.
Posted by J F Norris at 10:02 AM