FFB: And to My Beloved Husband - Philip Loraine 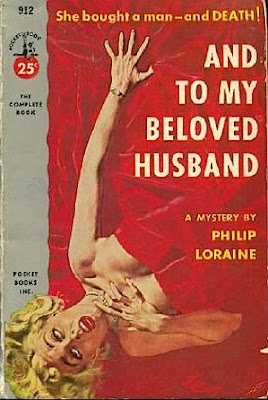 THE STORY: Not all ugly ducklings will transform into swans. But despite her plain looks and less than warm personality Beatrice Templer manages to win the hand, if not the heart, of her handsome prince. Aspiring novelist Michael Kinman, stunningly gorgeous, described as a "beautiful angel" by too many women, learns of Beatrice's recently inherited millions from a previous marriage of convenience and takes advantage of her besotted attraction to him. Soon they are married, living a life that not too many would describe as happily ever after. Michael has his mistresses and Beatrice has a diary into which she pours out her secret longing. Then one summer evening Beatrice drops dead at during a cocktail party with friends. Her last words are "Mikey, oh, Mikey..." as she looks right into his eyes with that usual cold blank stare. An autopsy reveals she died of an overdose of her combination anxiety reducer and sleeping pill. Could a woman so obviously in love with her beautiful younger husband have killed herself? Inspector Keen begins his investigation doubting that premise and is determined to uncover the dirty truth behind Beatrice's unexpected death.

THE CHARACTERS: And to My Beloved Husband (1950) is the debut novel by a writer who would go on to a prolific and rewarding career as a screenwriter. This first effort already shows his talent for rich characterization and adroit, well-delineated voices in his often acerbic dialogue. The novel opens with a scene between two supporting characters -- friend of the Kinman family Humphrey Orton and the lawyer Alexander Perowne. Orton is sort of a clone of Count Fosco, Wilkie Collins' odious villain. Like Fosco his repellent physique is offset by his wit and charm. He describes himself as both a procurer of and chaperone for Michael's mistresses. We learn almost all we need to know about Michael and Beatrice in this opening chapter, the most telling tidbit being that Orton will be escorting Michael's most recent paramour Helen Langton (the very antithesis of Beatrice) to the weekend party.

When the story moves into the Kinman home we find a divisive household, some utterly devoted to Michael and others duty bound to Beatrice. Constance Snagge is Beatrice's secretary companion, a mousy spinster in her mature years as besotted with her employer as Beatrice is in love with Michael. Michael too has his share of idol worship in the person of Beatrice's stepson Adrian Templer, a handsome painter with an erratic personality given to bursts of anger and resentment if he learns that anyone is talking ill of Michael or treating him poorly. These two also give Inspector Keen a lot of inside information about their adored figures that no other character is privy to.

Detective Inspector Keen is aptly named, as sharp as a knife with an personality edge just as cutting. Unlike many of the policemen who turn up in novels where a household is divided into two camps of slavish devotion and bitter jealousy Keen is not created as a peacekeeper. In fact, he's one of the more devious characters in the cast. More manipulative than Beatrice herself he exploits his role as a policeman during his brutal interrogations with casual insults, personal attacks, and caustic remarks intended to wound egos and weaken the suspect's carefully cultivated facades. He's as relentless as he is indifferent. All that matters to him is that he find a killer. For he is certain in this household of impassioned remarks and fervent emotions that someone has murdered Beatrice. 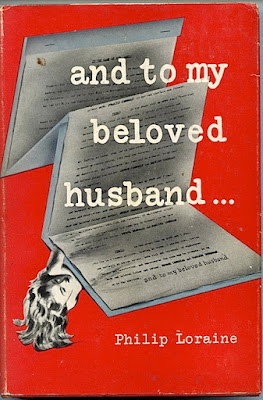 INNOVATIONS: The novel has an artful structure that alternates between the present and the past. Just after Beatrice's death takes place the following chapter gives us a detailed history of her past from her career in nursing to her caring for her future husband, many years her senior, ultimately leading up to a Mediterranean vacation where she meets Michael. The omniscient narrative voice allows us to know Beatrice in a detached way well suited to her enigmatic personality. Loraine adopts a cheeky tone often tinged with patronizing judgments and snide wit wholly suited to a novel where the characters are mostly putting on fronts or hiding behind an officious veneer created to protect fragile emotions.

Nearly every character is treated to exhaustive backstories highlighted by neat personal touches and unusual details. Loraine's omniscient narrator gets deep inside each character and the brutal honesty of the writing reflects how we are meant to think about each person. His style falls just short of what can become, in less talented hands, the voice of a godlike observer passing judgment on fallible and weak people.

THE AUTHOR: In the author bios on the dust jackets of "Philip Loraine's" early books it was clear the writer was not interested in revealing his real name or letting anyone know much about his life. There have never been any photos on his books and his name was not revealed until much later in his career. Robin Estridge, in fact, had a more successful career in the movies as both a screenwriter of original work and adapter of other writer's novels. His most well known book is perhaps the novel The Day of the Arrow (1964) which he adapted for the screen and became the weird neo-Gothic thriller The Eye of the Devil. Most of his novels were a mix of suspense thrillers and espionage adventures. And to My Beloved Husband is one of his few crime novels that could be classified as a traditional mystery. 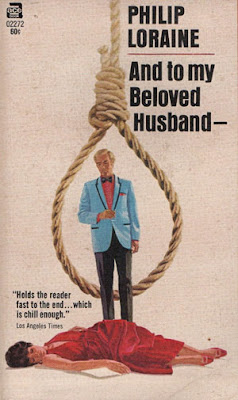 Estridge had two other novels adapted for the screen by other writers: The Break in the Circle and Nightmare in Dublin. For his own work in screenwriting he received a BAFTA award for The Young Lovers (aka Chance Meeting, 1954) co-written with playwright and novelist George Tabori and five years later was nominated for a BAFTA for his script North West Frontier, a wartime adventure. His more than fifteen other scripts include Checkpoint, a crime drama (1956); Beware of Children, a comedy (1960); and The Boy Cried Murder (1966), a remake of The Window based on a Cornell Woolrich story. He died in 2002 at his home in Oregon.

EASY TO FIND? Though born in England Estridge eventually settled in the USA. Many of his early Philip Loraine books are easier to find in US editions on this side of the Atlantic. And to My Beloved Husband was published in three different editions available from American publishers. The UK edition was titled White Lie the Dead (1950) and is apparently a genuinely rare book as I could find no copies for sale. There are only two known copies in UK library systems. Luckily, the used book market has a good number of copies in all three US editions, one hardcover and two paperbacks, all of them shown in the post. Happy hunting!
Posted by J F Norris at 11:11 AM