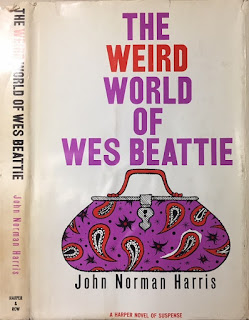 THE STORY: Wes Beattie, chronic liar and hapless young banker, is on trial in Toronto for a capital crime. No one seems to believe his fervent and outrageous tale of a conspiracy to frame him. He claims total innocence and is doing his best to tell the truth about a man and woman who have not only framed him for the theft of a handbag but the murder of his uncle. So bizarre is his story that a psychiatrist has turned him into a unique case history and hits the lecture circuit presenting Wes and his grandiose delusions and pathological lying as a treasure trove of psychosis. However, Sidney Grant a lawyer who attends one of those lectures hears something in Dr. Heber's talk that bothers him. Intrigued and fascinated by a kernel of truth in what appears to be nothing but fanciful possible paranoid ramblings, Sidney starts to look into The Weird World of Wes Beattie (1963) intent on proving Wes' story of conspiracy to be truth and to uncover the motive for the frame-up. What he finds is a preposterous labyrinth of interconnected coincidences and random bizarreness that proves more and more that Wes is indeed telling the truth. And when the full story is revealed hardly anyone can believe it including Sidney.

THE CHARACTERS: Though the title seems to indicate that this is Wes' story, the real protagonist is our hero lawyer/sleuth Sidney Grant and his small band of cohorts in truth-seeking. Sidney is dubbed "the Gargoyle" for his menacing and imposing attitude described by his colleagues "like some evil figure leering down from a Gothic cathedral" and "frowning down on his guests like some Mephistophelian judge. Really though Sidney is an attractive and likable young man "called to the bar only a few months before" who respects the law and abhors the abuse and incompetence of his lessers, sometimes even his betters. Sharp as a tack and more than clever Sidney manages to coax his friends and colleagues, along with the daffy June, Wes' sister, as a junior league of con artists and co-detectives as he manages to trick a motel voyeur into revealing the truth about what happened when Wes supposedly stole the woman's handbag from her parked car in the motel lot. This scene is a highlight in a comic novel that satirizes everything from Canadian law to Canadian banks, from the 60s phenomenon of wife swapping and drunken swinger parties to hockey and ice fishing.

June Beattie is one of the best characters of the books. She's the antithesis of her uptight and haughty wealthy family members, entirely devoted to her brother for whom she feels ample amount of sisterly love. Moreso than anyone she understands why Wes has retreated into his fanciful world and why he cannot help but embellish the truth with his overly active imagination. In some respects this satirical mystery novel is a retelling of "The Boy Who Cried Wolf" taken to utterly absurd extremes. You can't help but join in June's caring for her brother when she relates in her amusing narrative voice just why Wes is the way he is.

There are also some fantastically rendered minor characters who come into the story for such brief moments but leave long lasting impressions. Sidney recruits a "second story" man who he had previously helped acquit of burglary charge due to lack of physical evidence. This thief along with the reliable June travels with Sidney to the Ontario backwoods where he assists Sidney in breaking into a cabin in a remote forest to find incriminating evidence that will help prove the guilt of one of the conspirators. What they find in the cabin only further complicates the already mind-boggling plot. 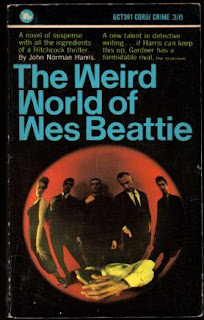 INNOVATIONS: The modern reprint of The Weird World of Wes Beattie touts the novel as "the first truly Canadian mystery". This is a gross exaggeration that publishers like to plaster on their books to help sales, but after completing the novel I can see why the original writer of that phrase felt it necessary to label the book as such. It certainly is filled with every Canadian cultural tidbit that you can think of -- hockey, ice fishing, officious banking to name only a few. Harris works very hard to tie the book to his native Toronto and its environs and the book really feels like it could not have taken place anywhere other than Canada. But as far as the first Canadian mystery that is far from the truth. The prolific writers Grant Allen and Frank Packard were publishing well before Harris was born and Douglas Sanderson (aka "Martin Brett") was writing thoroughly Canadian private eye novels set in Montreal a full decade before Harris' novel was published.

Notably the entire structure of the book recalls the intricately plotted and coincidence-laden novels of Harry Stephen Keeler who practically invented the "webwork" crime novel. The Weird World of Wes Beattie is one of the finest examples of this kind of maze-like storytelling where everyone and everything is tied to a seemingly simple crime like the theft of a handbag. The conspiracy to frame poor Wes Beattie is an ingenious and awe-inspiring work of finely tuned plotting and a brilliant use of apparently innocuous events -- the way an old school chum is snubbed in a mechanic's garage, for example -- that all fall into place like a skilled magician shuffling a pack of cards. As in real life it's the oddities the characters tend to remember and these odd incidents, no matter how trifling or insignificant, have great importance and are compounded tenfold within Harris' truly awesome plot.

The climax takes place in a Canadian courtroom and Sidney's expert cross examination of one of the key witnesses is on par with -- perhaps even surpasses -- the legal fireworks and melodramatic courtroom pronouncements of Perry Mason at his ruthless best. So astounding is the preponderance of incredible evidence that Sidney in essence gets a confession from the witness stand without the testifier actually verbally admitting his guilt. A real coup in crime writing, I'd say.

THE AUTHOR: John Norman Harris (1915-1964) was a former RAF pilot with an astonishing wartime life that included being shot down in Germany, taken as prisoner of war, and planning "one of the greatest prison breaks of all time" which he used to form his award-winning short story "Mail" (Maclean's, 1950). He worked in public relations for Bell Canada as well as advertising for Canadian Imperial Bank of Commerce, two careers which obviously provided him with ample fodder to lampoon in his first novel. In addition to the two comic crime novels featuring lawyer Sidney Grant, Harris wrote about military life and the Canadian air force in Knights of the Air: Canadian Aces of World War I (Macmillan, 1958). 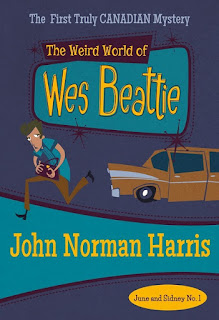 EASY TO FIND? Those interested in a first edition may not be too lucky. I found my US edition with the rare DJ a few months ago on eBay for a pittance and it was in very good condition. But a search of used book markets show very few US or UK hardcover editions from the 1960s when it was originally published. There are numerous paperback reprints (Corgi in the UK, Popular Library in the US) offered at very affordable prices. But the best news is saved for last. Happily, ...Wes Beattie was reprinted by Felony & Mayhem several years ago. (Such good news for a change, eh?) Harris' last novel published after his death -- Hair of the Dog (1989), a sequel of sorts featuring Sidney and his new bride June -- was also reprinted by Felony & Mayhem this year and with it came a new edition of The Weird World of Wes Beattie. Both books are available in either paperback or digital format. If you prefer eBooks you need to buy it directly from Felony & Mayhem. Click here and you'll be taken to the page for the book with Kindle already selected for you. They also sell the book in EPub format. Use the pull down menu to find the other digital version.
Posted by J F Norris at 12:44 PM