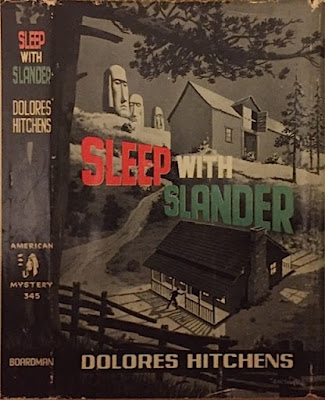 Private eye Jim Sader deals with a lot of missing persons cases, but his latest is pretty odd to say the least. Seems that his new client, Hale Gibbings, wants Sader to locate a child who is apparently being abused by his latest foster parents. The odd part? The child is his grandchild who was given up for adoption five years ago, but the Champlains his adopted parents are dead, father died in plane crash, mother drowned and her body was never recovered. Gibbings has no idea who became the child's guardian, some relative of the Champlains he guesses. He also doesn't want his name involved in the case at all. No mention of the adoption, his daughter's terrible past, or his name must ever be given out during his investigation. Think this is going to be missing person case? Think again. Before Sader finally locates the boy in the home of a long dead sculptor located in the northern California forests there will be a couple of murders and several attempts on his life.

Sleep with Slander (1960) has been touted repeatedly as "the best private eye novel written by a woman". The quote comes from a review by Bill Pronzini in 1001 Midnights and shows up on the UK paperback reissue from 1989 as well as many reviews all over the internet. While it may not be the "best" private eye novel written by a woman it certainly captures an authentic tone and feel reminiscent of a traditional hardboiled crime novel of the mid-1940s. It also has a uniquely feminine take on a missing persons case. Rather than a missing persons case that deals with two timing lovers or a con artist who has good reason to want to disappear Hitchens focusses on a missing child. As one might expect where the search for a missing child is the impetus for a crime plot the role of mothers, married or otherwise, plays a crucial part in the story. Though it starts with a brief prologue in which the reader knows that the child is being mistreated cruelly there is never any sense that the book exists solely as a social critique on unwed motherhood, adoption, or child abuse. The situations all grow out of a carefully constructed crime plot that has all the grit and sizzle and deftly handled twists of any story penned by Hitchen's male colleagues.

Even more striking is the way in which setting and locales reflect the characters in the story. It's almost as if Hitchens had a set designer who whipped up multiple lush interiors that give us an idea of who we are about to meet and what Sader should expect from each of the people he questions. There is a cinematic quality to the descriptions of the many apartment rooms, bars, and richly decorated homes that appear throughout the story. Each one is described in meticulous detail with deft touches like the Asian motif recurrent in one home's decor that give an idea of who Wanda Nevins is and what she dreams of, how Sader notices the abundance of exotic figurines and "dustcatchers" in the sculptor's house in which the harrowing climax takes place (shown on the DJ of the UK edition at the top of this post. Those Easter Island like stone heads really are in the story!) 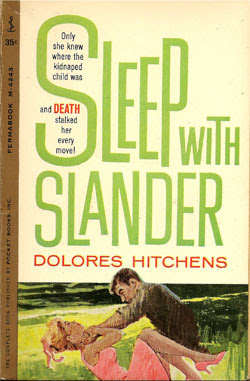 Another of the more intriguing bits of detection takes place in an infant clothing store. Sader finds a box marked "Betty's Baby Shoppe" at the fire-ruined home of Tina Champlain and takes it to the store. He wants the owner to look over the items hoping that something might jog her memory about who bought them. Inside she finds a hand knit baby mitten among the scraps of fabric and silk ribbons. The mitten is the work of a woman who did hand knit items for the store and whose work is utterly distinctive and easily identified by the pattern used. The knitter also happens to be the shopowner's mother. You would never find something like that scene in a book by Hammett, Chandler or any of their imitators.

Sleep with Slander is teeming with similar unusual, womanly touches and yet the hardboiled atmosphere never once veers into the realm of cutesy or cozy. Each subtle detail betrays the work of a woman writer who has cleverly woven commentary on the nature of motherhood and the care of children into what is very much a tale of violence and cruelty. When tenderness arises out of this admittedly very tough story it is arresting and provides a welcome respite from the fights and bloodletting.

We also get a sense of a private eye whose business is his entire life. Sader is doing a favor for his partner Scarborough (away in San Francisco) by housesitting at Scarborough's aunt's house where he must also care for an overly friendly, attention starved Irish setter and an irascible parrot. We see a domestic responsible side to this single guy that might never appear in a private eye book written by a male, I would guess. These brief scenes comment on his seemingly empty private life and show a devoted friendship that complements his business partnership.

QUOTES: The dog cocked his head as if something in his mistress' voice puzzled him--perhaps the effort to sound honest.

There was some whole item like a screw loose in a crippled machine, that was fouling it all. He couldn't find it but he could sense it. He could sense the lack of orientation in himself, the failure to come to grips, the fumbling with chaos like a puzzle that didn't fit and wouldn't fit until the pieces that didn't belong had been tossed out. Where was the screw loose? "I'm damned if I know," he told the windowpane. "I'm full as hell of similes but I can't figure worth a hoot." 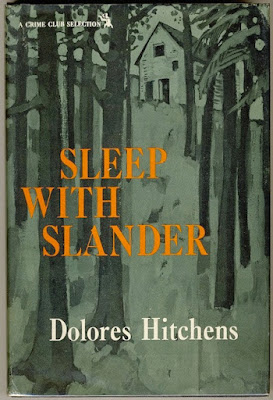 1960s CULTURE: There's a timeless feel to this story. Even if today Sader would be resorting to the internet to do the majority of his investigating his many face-to-face encounters with the colorful supporting characters in the large cast don't seem strictly a part of the sixties. Language is modern, sharp, often witty, and never rings false. There are no topical references that often seem like commercial breaks as in other books of this era. Only occasionally does the year 1960 come into view but ever so quietly.

1. Sader periodically checks in with his answering service, a type of business that seems as redundant as answering machines these days.

2. Our private eye hero has a habit of pulling into drive-in restaurants for a burger every chapter or so. In one scene Sader is in such a rush to pay his bill and motor away he disregards drive-in etiquette by blaring his horn instead of politely blinking his headlights. I liked this offhand aside that closes one of his many food pitstops: "The carhop came and thanked him for the tip and took the tray away. As she walked into the light her legs shone like silk below the fluffy skirt, and Sader yawned, and the thought, My God, I really must be beat. I don't even want a second look."

Is this really "the best private eye novel written by a woman"? I always hesitate to comment on superlatives that seem so limiting and final. I find it hard to make lists of the best of anything, frankly. But as for the second half of that quote often left off "--and one of the best written by anybody" I will wholeheartedly agree. Sleep with Slander is well worth your time. You may, however, run into trouble locating an affordable copy now that it's become something of a cult classic in private eye literature. But such is the price of fame -- and superior writing.

This is my first of two (maybe three) novels published in 1960 for December's "Crimes of the Century" blog meme hosted by Rich Westwood at his blog Past Offenses. Make sure to check out the rest of the reviews and essays on 1960's crime fiction.
Posted by J F Norris at 1:36 PM