Deliver Us from Wolves - Leonard Holton

Part of the mystique of foreign travel is the total immersion in a different culture. A true traveler does not want to be cocooned in the familiarity of fast food restaurants or signs pointing out everything in English or anything that reminds one of home. Rather he wants to experience the wealth of difference in food, language, and habits of the new country he's visiting. In Deliver Us from Wolves (1963) Father Bredder, the series detective in Leonard Holton's mystery novels, is lucky to have at least the language skills in hand when he is accepts a free round trip ticket to Portugal won by his housekeeper who cannot go. He plans on visiting the holy shrine of the Virgin at Fatima and also is told by his own bishop in California to pay a call on the Bishop of Leiria. When he arrives he discovers the timing of his visit could not have been more fortuitous. His education in a very different part of Portuguese culture will take him into the realm of superstition and the paranormal.

The title Deliver Us from Wolves is the English translation of the Latin phrase "Libera nos a lupis" which keeps cropping up in the oddest places during Father Bredder's brief but very strange stay in Portugal. He first encounters it on a strange claw shaped stone sold to him in a tourist shop filled with tacky souvenirs depicting the image of the Virgin of Fatima on everything from handkerchiefs to kaleidoscopes. The stone turns out to be a talisman and the shopkeeper tells him of the legend of the werewolf that hangs over their town. When Father Bredder visits the Bishop of Leiria he learns even more about the legend of Pedro da Malveira who seems to have once again risen from his grave.

Several dead lambs were found on the surrounding farms and at each site a series of bloody wolf footprints that suddenly turn into human footprints have been discovered. A local man has also disappeared and the fear is that he has also been attacked by the ghost of Pedro da Malveira, a 17th century thief executed for witchcraft. The townspeople have succumbed to the legend again and the talk of wolves and lobishomen, the Portuguese word for werewolf, will not stop. Fear and suspicion are controlling the daily habits population. The Bishop would like Father Bredder to discover who is up to mischief and put an end to the werewolf superstitions so the town can return to normal life.

Our priest detective undergoes a crash course in the Portuguese culture and the reader learns with him a lot about Portuguese history and the odd variations of how the werewolf legend is incorporated into their culture. Father Bredder meets Father Painter, a British priest sent to the local parish, who has not been living up to his calling. Church attendance is down and the English priest is apparently is not well liked by the townspeople. In a series of didactic scenes he lectures Father Bredder on the architecture of Portuguese castles, the history of the trial of Pedro Da Malveira, and the local werewolf superstitions. The most interesting aspect of Portuguese lobishomen is the melding of vampire and zombie lore into the werewolf myth. Some of more bizarre features include: the lobishomen has an enlarged big toe, he must return to his grave by daybreak, and he must seek out a new human form by killing a living human in order to make his transformation complete.

Father Bredder is convinced that someone is taking advantage of the lobishomen legend and the story of Pedro da Malveira to cover up some other type of criminal activity. His personal knowledge of his life as a former Marine and the training of attack dogs in his service come into play and help him as a detective in this "busman's holiday" type of book. The detection, however, is limited as the book takes on more of a supernatural/adventure thriller with lots of action sequences replacing the usual scenes of detection.

Like many of the other books in the Father Bredder series Holton uses a crime plot to discuss aspects of Catholic religion. Here the story of superstitious minded people makes it all the more easy to bring up discussions about the secular minded person contrasted to the man of faith. In addition to the fearful townspeople the priest encounters an atheistic schoolteacher who will not allow even a simple cross in her schoolroom. She shuns all talk of God and will not teach religion to her students. Her brother is the man who has disappeared and Father Bredder suspects he has been killed and the body disposed of or hidden someone in order that the werewolf legend can flourish. He also suspects that her brother was involved in some sort of criminal scheme that leads him to the castle high above the village of Sao Joaquin da Serra where he meets the imperious Countess of Castelbranco.

Deliver Us from Wolves is the fourth book in a series of eleven adventures with Father Bredder. Most of the books are set in Los Angeles where the priest is the parish leader at a convent school. In some of them he travels outside of California, but I believe it is only in this book where he leaves the United States. I learned an awful lot about werewolves, Portuguese culture and religion, Portuguese fortress building (to build on what I already knew from reading Shelley Smith's This Is the House) and the existence of the Iberian wolf, a species of wolf smaller than the North American gray wolf and geographically confined to Portugal and southern Spain. Reading this very unusual and highly entertaining mystery -- oh yes, there's a murder and several other crimes to solve within its pages -- has been the most immersive learning experience in a foreign culture that I've had this year without ever stepping out of my comfortable couch at home. 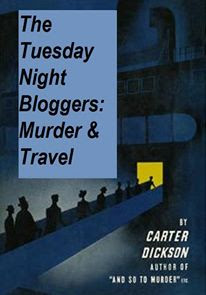 This essay is my contribution for "The Tuesday Night Bloggers," a group of vintage mystery book bloggers who write on a specific theme each Tuesday. Throughout the month of May the members of this neo-Tuesday Club will write on various aspects of travel as featured in vintage detective and mystery fiction. Other posts can be found at Curt Evan's highly informative blog The Passing Tramp.  Why not check 'em out?
Posted by J F Norris at 7:20 AM