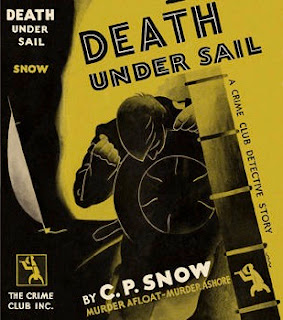 The shipboard mystery or nautical mystery novel is just as prevalent in the Golden Age as those set on a train. Death on the Nile may very well be the quintessential detective novel set on board a ship. Freeman Wills Crofts is better known for his train mysteries but he wrote quite a few with ships and yachts including The Sea Mystery, Mystery in the Channel, The Loss of the 'Jane Vosper', and Mystery on Southampton Water (Crime on the Solent in the US). A small sampling of other titles: Hate Ship by Bruce Graeme, Singing in the Shrouds and A Clutch of Constables by Ngaio Marsh, and Too Much of Water by Bruce Hamilton.

The American writers were just as good at setting murders on board luxury yachts, cruise ships, military craft, submarines and rowboats just as well as their British counterparts. S.S. Murder by Q. Patrick tells of a bridge party on board a yacht and one of the card players being done in. Obelists at Sea by C. Daly King is the debut detective novel featuring the erudite and long winded Dr. L. Rees Pons. John Dickson Carr's shipboard mystery The Blind Barber is more farce than detective novel, but as Carter Dickson Nine-And Death Makes Ten (aka Murder in the Submarine Zone) is rather unique in that the ship featured is a military cargo carrier that is been temporarily assigned as a passenger ship and the plot brings up all sorts of maritime laws during WW2 including how the blackout rules in England extended to ships and cruise lines. Rufus King made an entire career of writing about killers dispatching their victims at sea in titles such as Murder on the Yacht, Murder by Latitude, The Lesser Antilles Case, Murder Masks Miami and many, many more.

This may lead you to believe that I'll be writing about one of these American shipboard mysteries and I thought I was going to do so, too. That is until I uncovered my very old copy of Death under Sail (1932) and decided to finally give it its long overdue examination.

Roger Mills, physician and yachting enthusiast, invites six friends on an excursion through the Broads, the system of rivers and lakes in Norfolk. The morning after picking up Ian Capel, the oldest guest and narrator of Death Under Sail, Roger is found shot dead still holding on to the tiller in the stern well (see plan of The Siren below). Though the murder in C. P. Snow's very first work of fiction (and first of only two detective novels) does indeed take place on a ship -- specifically a wherry yacht -- the majority of the book actually takes place on land. The yachting party is confined to a bungalow several miles down the River Bure and a short jaunt up the River Thurne in the Norfolk village of Potter Heigham. There they stew, fester and fret doing their best to endure the Puritan tirades of shrewish housekeeper Mrs. Tufts and undergoing absurd interrogations from Det.-Sgt. Aloysius Birrell who seems to have learned most of his techniques from one volume of criminology and about a dozen detective novels. 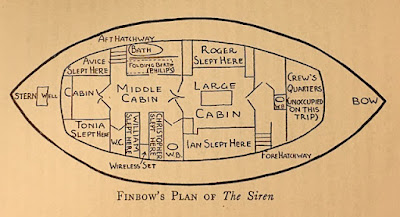 The novel at first appears to be a parody of the detective novel. Birrell comes off as a comic character from the moment of his entrance where his apparent reckless driving of a police motorboat causes a violent wake to capsize the dinghy sending three men into the river. Contrasted with Birrell, is the omniscient amateur sleuth Finbow who is a friend of Ian Capel's and who Capel calls in to help investigate the puzzling death of Roger Mills. Finbow spends much of his time observing, flattering the suspects into revealing themselves, and eavesdropping on people's private conversations like any good amateur detective of the Golden Age would do. Ethics have nothing to do with crime solving where Finbow is concerned. He also spends a lot of time expounding some of Snow's own personal beliefs which interestingly will serve as the foundation for his later mission in life as spokesman for the scientific mind. All these mini-lectures seem to be thrown in to distract the reader. But Snow has plotted the book in a devious fashion and despite the lectures that appear to be filler the book is actually very much in the fair play tradition. 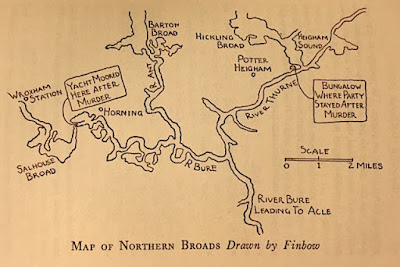 There is a lot of talk about the routine that develops on a ship when people travel in such a confined space like the Siren. The murderer must have been aware of who did what and where they went every morning, Finbow surmises. Ian is therefore eliminated from the start as he has only been on board the Siren for a single day and night. Not long enough for anyone else to know where he might be when Roger was shot. The rest of the detective work is done along these lines. Snow might have been influenced by the detective novels of Anthony Berkeley who was a pioneer in stressing the importance of psychological motive and human behavior in crime fiction. There is not much physical evidence to review. Rather, Finbow is more interested in why Avice is so frightened and why her crying seems to be more acting than genuine, why William remained shirtless on the morning of the murder and the importance of how he undresses, why Tonia appears to be in love with Phillip but may be masking a hidden love affair, and why Christopher needed to get out of his wet clothes so quickly after the capsizing of the dinghy. These "psychological insights" are what lead Finbow to eliminate most of the suspects eventually leading him to the identity and motive of the killer. He develops a list of five important questions that include all the suspects and each question is answered in grand detail in the final chapter. It is only then that the reader learns that everything mattered, each incident and discussion was essential to the story. It's all brilliantly done with some bravura misdirection that even the most seasoned detective fiction aficionados will not spot.

THINGS I LEARNED: Though not much is discussed about the wherry itself or the Broads I needed to satisfy my curiosity and so I looked up all sorts of photos of Norfolk locales mentioned along the rivers shown on Finbow's map. Then I visited a fascinating website with photos of families and friends on their wherry yachts and got to see just how the Norfolk towns looked at the time when Snow's novel was set and even earlier. In fact, the bulk of the photos are from the post World War I era. You can look at the same photos if you so desire by going to Broadland Memories.

MCC is mentioned in passing but I had no idea what the characters were talking about. The passage is here: "Tradition, my boy," William broke in sharply. "Like the M.C.C. and Public Schools. Doing a thing twice is good enough reason for doing it forever." Based on the linking of tradition with MCC and public schools I'm guessing William means the Marylebone Cricket Club which controlled the way both amateur and professional cricket was played for over three centuries. From the info I looked up the MCC still owns the copyright on cricket rules that were created back in the late 18th century. Apparently another group known as the ICC (International Cricket Club) is trying to wrest control from them and make a more harmonious, less rigid rule governing board for international cricket playing.

EASY TO FIND? Yes, indeed. Luckily, Death Under Sail was chosen as one of the "Top 50 Detective Novels from 1900-1950" by Jacques Barzun and Wendell Taylor. That selection allowed the book to be reprinted multiple times since its original 1932 publication. Several paperback reprints are available in the used book market in both US and UK editions. And you can still find a few copies of either the Doubleday Crime Club 1st edition (US) or the Collins Crime Club 1st edition (UK) if you're willing to shell out $75 or more. The prices for the paperback reprints, of course, are much more reasonable and there are literally hundreds of copies out there. Happy hunting!

This is my second post on travel in detective fiction which is the theme for May for the group of vintage mystery fiction fans who call themselves "The Tuesday Bloggers." Other links are here:

Throw Mama (or Anyone Else) from the Train! - Bev at My Reader's Block
Christie on Holiday - Moira at Clothes in Books
Why Set a Murder Mystery on Holiday or a Mode of Transportation? - Kate at Cross-Examining Crime
This Train Is Bound for Gory - Brad at Ah! Sweet Mystery
Coach Tours to Crime - Helen at Your Freedom and Ours
Posted by J F Norris at 12:41 PM