One of the longest running mystery novel imprints was Red Badge Detective put out by Dodd Mead. The earliest date I can nail this down to is 1930. According to an advertisement included in the first few titles, this imprint was invented to distinguish the best of Dodd Mead's mystery novels. But as far as I can tell every single mystery novel published by Dodd Mead throughout the 1930s and 1940s carried this imprint info.

It was only towards the end of the imprint in the late 1960s and through the mid 1970s that only a few books carried the Red Badge logo. For instance, Agatha Christie's books were not Red Badge throughout the 60s or 70s while someone relatively new like Leonard Holton was given the Red Badge logo. I guess as Dodd Mead decided it was no longer necessary to brand a recognizable mystery writer like Christie and saved the Red Badge logo for less well known writers they were interested in highlighting.

Inside my copy of The Tragedy of Twelvetrees by Arthur Rees (1930) is this ad facing the title page explaining the reason for the imprint: 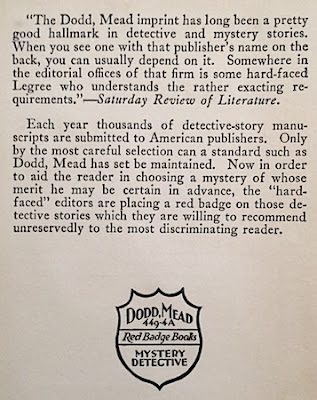 The Red Badge imprint also sponsored a mystery novel writing contest that lasted only four or five years. The first winner in March 1937 was Clifford Knight for his detective novel The Affair of the Scarlet Crab which introduced his sleuth Huntoon Rogers. He won $2000 in addition to having his work published. Knight went on to write 23 more detective and suspense novels. Other winners such as Ruth Sawtell Wallis whose first novel Too Many Bones won the prize (only $1000 for her) in 1943 were not as prolific. And some wrote only one novel, collected the prize, saw the book published and were never heard from again. Check out the photo of the rear flap of Sailor, Take Warning! (shown below) for the lowdown on the contest.

The logo went through a few changes as can be seen in these photos. I have no idea of the significance of 449-4A or what it might refer to. Anyone who does know please feel free to leave a comment below. [UPDATE June 2018: a reader did some research and has come up with an answer to the number mystery. He emailed me his results. See comments below for the solution to this quasi-mystery.]


Once again this post shows a mixture of DJs from my own collection and some that I managed to find from online booksellers' catalogs. The authors who were published by Dodd Mead during the heyday of the Red Badge imprint were among the elite of mystery and crime fiction. They included Agatha Christie, R. Austin Freeman, Freeman Wills Crofts, John Rhode, Kelley Roos, Michael Innes, Clifford Knight, Lee Thayer, Hugh Pentecost/Judson Phillips, Bart Spicer, William McGivern, Ursula Curtiss, Rae Foley, two books by Cornell Woolrich, and two books by Edmund Crispin after he was dropped by Lippincott.

Note that by 1974 while the Red Badge name was still being used, the logo with the detective had been abandoned on the spine of the DJ. The imprint, the brand name and the use of the logo would disappear from all mystery and suspense fiction by the end of the 1970s.
Posted by J F Norris at 3:57 PM