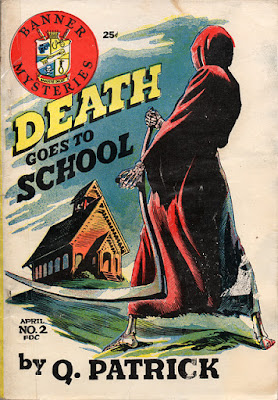 It's parents' weekend at Craiglea, an English boarding school for boys, at the start of Death Goes to School (1936). Several events have been specifically scheduled to show off the students' skills in athletics and other non-scholastic areas. Parents have traveled far and wide to visit with their boys and see how the Craiglea faculty are molding them into specimens of fine young men. During the weekend one boy is found dead in a linen closet.

Early on in the police investigation we learn that the boy is the son of a United States judge who had been threatened by Nazi sympathizers when he sentenced to death two criminals for anti-Semitic terrorist acts. The threats manifest in attacks on his two sons. A failed attempt at kidnapping prompts the judge to remove his sons from any further danger by sending them overseas to the boarding school. The prime suspects for the threats and botched kidnap plot are a brother and sister named Heller who are related to the criminals the judge sent to the electric chair.

An American private eye named McFee is hired to keep an eye on the boys. As vigilant as he thinks he is his talents as a bodyguard fall short of the mark when one of the boys dies. In order to redeem himself he turns sleuth to discover who killed one of his charges. As in all good detective novels he finds an accidental sidekick in the person of the headmaster's daughter who serves as Craiglea's music teacher. He also recruits a precocious student who he believes witnessed the murder to be another partner in sleuthing and to do some digging into the other schoolboys' secrets. 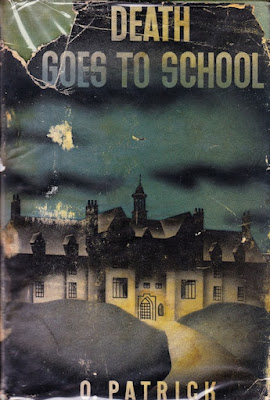 Death Goes to School is the very first collaboration between Richard Wilson Webb and Hugh Wheeler as far as novels go.They had previously collaborated on several short stories which mostly appeared in American Magazine. (see this post). Already we can see themes and motifs that will recur in their later work such as the incorporation of taboo subject matter (child murder) and homoerotic descriptions of the handsome male characters. There always seems to be at least one Adonis in a book written by Wheeler and Webb. This time it's Harvey Nettleton, an English teacher at Craiglea.

The writing duo also display their penchant for the supernatural in the legend of the Grey Lady, a nurse who through negligence was responsible for a student dying of an infectious disease. Ironically, she succumbs to the same disease and dies. Her ghost is said to haunt the hallways of Craiglea. The boys tell stories of the Grey Lady moaning and wailing in grief and remorse for the loss of her ill patient. She makes a few appearances over the course of the book. Or is someone taking advantage of the students' superstitious fears?

Some of the reviews of the time:

"The best tale Q. Patrick has written, with an original finale. The setting seems to indicate that English schools are growing dangerous ground. Surely the fifth or sixth murder in a school, within the past few months!" - Kirkus Reviews, Feb 24, 1936

"Though slightly unfair in denouement the telling is good, the dialogue and background interesting." - Saturday Review Feb 29, 1936

This is a quick read and has some excellent scenes, especially between McFee and his boy sleuth. Some of the clueing is rather obvious but there is indeed rather an unfair twist in the final pages. As an example of Webb and Wheeler's interest in original, lively characters and adept plotting technique Death Goes to School is worth a look for the more discriminating reader of detective fiction. But don't break your back looking for a copy. Most of their later work under any of their three pseudonyms is much better as well as much more easy to find.