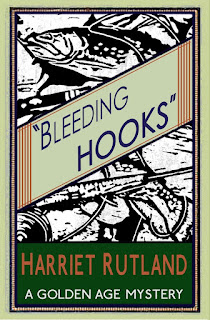 Time for a rerun.  When I first posted this review back in 2011 on The Poison Fly Murders I received no comments. That's probably because there were absolutely zero copies to be found in the used book market.  Now that all of Harriet Rutland's books have been reissued, and this particular title is not receiving the amount of attention I feel it is due, I'm re-posting my original review.  I highly recommend everyone get their hands on a copy of this book (so far my favorite of the three Rutland mystery novels) as well as the other two.  All are available from Dean Street Press via all of the amazon.com sites throughout the world.  Both paperback and digital versions are for sale.  Enjoy!

The original title of this book is the far more evocative Bleeding Hooks. It also happens to be an exclamation uttered frequently by Major Jeans, one of the most colorful characters in the story. An intriguing and devilish puzzler Harriet Rutland's second mystery novel is set in a Welsh sporting lodge that is host to a group of fly fishing Britishers on holiday. One day during the lunch break, on a small island several miles from the lodge, the body of Mrs. Mumsby, a middle-aged woman more interested in the men at the lodge than the fish in the lake, is discovered on the beach. Her face is blue, her body contorted, and in her palm a fishing fly has become deeply embedded. It is thought she died of a stroke or heart attack. Among the group is Mr. Winkley, Rutland's series Scotland Yard detective, serving as yet another policeman on a "busman's holiday," who almost immediately suspects foul play.

There is lots of talk about fly fishing, the role of the ghillie (a fisherman's guide and oarsman, I gathered from the reading), the art of fly tying, the difference between fly fishing and regular angling, and the difference between trout and salmon fishing. I thought this would get dull, but none of it was. On the contrary, Rutland manages to make fly fishing rather fascinating. As an example, when talking of fly tying Major Jeans refers to his flies by the macabre names he gave them: "Avenging Murderer," "Blinkin' Bastard," and "The Bloody Butcher."

These mini lectures on fly fishing, and all its arcane skill and art, are interspersed throughout the narrative with much of it being vital to the story of the unraveling of Mrs. Mumsby's strange murder. Mr. Winkley conducts his own legitimate investigation gathering evidence to prove the death is, in fact, a nasty murder. He is convinced that the fishing fly was poisoned then somehow dragged into Mrs. Mumsby's palm perhaps by a skilled fisherman with a rod. While this is going on, two young people step up and try their hand at amateur sleuthing and do their best to discover the killer on their own. In the process, one of the amateurs' life is endangered and another attempt at murder is made. Adding to the oddness is a young man aspiring to be a stage magician who owns a pet monkey that mysteriously disappears shortly after Mrs. Mumsby's death.

There are a couple of neat twists in this clever plot, many secrets revealed and a finale that gives three surprises one right after the other. Most surprising -- to both Mr. Winkley and the reader -- is the final chapter in which it is revealed that the murderer has perhaps pulled off a perfect crime. The last bit makes this book something of a little masterpiece in my opinion.

My only criticism is the author's penchant for cutesy character names. The young couple, a 21 year old woman and man of the same age, acting as amateur detectives are named Pansy Partridge and Vyvyan Gunn, but the reader gets to know them by their nicknames:  Pussy and Piggy.