We were Christmas shopping last weekend and I saw this new holiday item being shoved onto the consumers. It's a special copper mug intended to serve a Moscow Mule. Amazing how some alcoholic beverages becomes trendy and manufacturers create ways for you to think you absolutely must join the latest bar trend by buying an item that you absolutely must use in order to drink it. Bah humbug! Anytime I see the words "Moscow Mule" I immediately think of fictional superspy Jonas Wilde and his penchant for odd cocktails. So here's a rerun from years ago (Oct 8, 2011) on one of my favorite spy novel series. Though this title has not been reissued, three other books in the series have been reprinted by Top Notch Thrillers, an imprint edited and coordinated by crime writer and all around good guy Mike Ripley. The Top Notch Thrillers are available through all the usual bookselling sites as well as direct order from Ostrara Publishing. 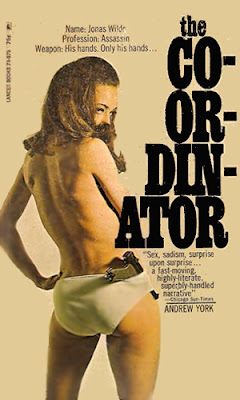 The second in this series featuring Jonas Wilde, an assassin in the employ of a secret British espionage unit, is just as good as the first. The book peripherally comments on the action of the first book (see my review here) but does so without spoiling the first book making it fine to read out of sequence. Wilde is assigned to eliminate Gunner Moel, a Danish swimwear designer, who in the Hitler years was an operative for the Allied powers and is now playing a pivotal role in communist espionage. As with The Eliminator this book is divided into two sections: Part one is called “The Bait” and the other is “The Trap.” Based on those structural clues it should be obvious that Wilde’s assignment will turn out to be more than he expected it to be.

Prior to his visit to Copenhagen we know that Kaiseret, one of the villains from The Eliminator, attempted to have Wilde assassinated. It failed when Jonas caught the hit man on board his boat, fought with him and delivered the usual fatal karate blow. When Wilde reports to Mocka, his superior in the covert unit, he informs his boss of the blundered assassination. Mocka claims to know nothing of that plot.

Once again York has created in Mrs. Inger Morgan-Browne one of his strong woman character portraits. She is every inch a match for Wilde in determination, job focus, and ruthless survival. Steely and cold as ice Inger doesn't even have a sense of humor something Wilde thinks is essential to staying saner in the spy world. She turns out to be the Irene Adler of the piece succeeding masterfully where all others have previously failed in overcoming the seemingly invincible Jonas Wilde. She is assigned as his partner in an elaborate escape plan once he kills Moel. But when the original assignment backfires and Wilde needs to escape sooner than planned he makes his way to the hotel and discovers that Inger’s husband has been murdered and Stefan, the chauffeur/thug in Moel’s employ who shot him, is waiting for Mrs. Morgan-Browne. Wilde surprises Stefan in the Morgan-Browne's hotel room, he fights and subdues him tying him up and waits for Inger. When she shows up she wastes no time in putting a bullet in Stefan's brain. A new plan must be improvised and Inger rises to the occasion defying Wilde’s preconceptions and taking matters into her own hands with a handy hypodermic syringe loaded with a potent narcotic cocktail. She captures Wilde, keeps him drugged, and returns to Copenhagen to bargain with the group that Wilde thought was the enemy but who she assures him are the good guys.

The second half of the book displays York's usual spy/adventure novel wizardry. Double and triple crosses, numerous fight scenes with the two women characters proving themselves to be as tough as the men, a ghoulish torture sequence involving rats, and even a cameo from a mad scientist all serve to make this fast paced and very smart book a thrilling read.

Something different about this book is the addition of Bond-like gadgetry and fiendish deathtraps. Gunnar Moel was blinded in a flying accident and he manages to navigate his way through this house via "sonic torch principle." He wears a pair of glasses outfitted with a sound transmitter that sends out a beam which reflects off of solid objects and the signal is picked up by a transmitter behind his left ear. As the beam reflects a different tone for different materials. Much of the furniture in his house is made of glass or chrome to distinguish from the plaster and wood of the walls and doorways and help him find himself around. It also makes for a scenically bizarre home.

Later, in an over-the-top pulpy climax, Wilde and Inger become human guinea pigs in an early form of cryogenic experimentation. They race against time trying to escape from an apparently foolproof glass chamber as the temperature gradually decreases from 20 degrees Celsius to -70 degrees. It's a deathtrap designed by a mad scientist who might have escaped from the pages of Doc Savage story and worthy of a James Bond movie or even the campy Batman TV series though it might be difficult to film (even these days) since both of them are completely naked at the time.


An added bonus to reading these stories is learning the names and ingredients of esoteric cocktails. Can a cocktail be  really be described as esoteric? Just ask for a Moscow Mule, a Bijou or a Frisco from your local bartender and I'm sure you'll get puzzled looks and a sarcastic comeback. Either that or an honest "What's in that?" While Jonas tends to favor Bacardi laced drinks he is known to sling back a few gin concoctions as well. A Bijou, for instance, is equal parts gin, sweet vermouth, green chartreuse, orange bitters and a twist of lemon. Some enterprising marketing person should've come up with the Jonas Wilde Cocktail Handbook to help promote the series. If these books were published today you can be sure there would be something along those lines sitting right next the scantily clad women on the covers of "The Eliminator" series.
Posted by J F Norris at 7:41 AM