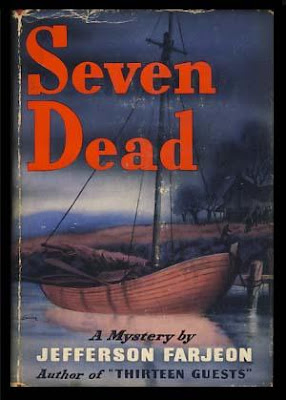 In light of the unusual interest in long forgotten mystery writer Jefferson Farjeon and the unrivaled popularity of the recent reprint edition of Mystery in White I thought I'd look at some of his novels that aren't getting the attention of the British Library Crime Classics imprint. Seven Dead (1939) is one they somehow overlooked yet to me is a better candidate for a reprint edition as it highlights Farjeon's skills in narrative experimentation, suspense and is overall one of the more original spins on a detective novel plot from the Golden Age.

As the title suggests the crux of the plot is the discovery of seven corpses found in a locked and shuttered room in a remote seaside cottage. They all show signs of the throes of a violent death but no trace of wounds on any of their bodies. The crime scene is investigated first by amateur Tom Hazeldean, a reporter and yachtsman, and Inspector Kendall. Entranced by a portrait of a young girl that has been inexplicably pierced by a bullet Hazeldean is determined to track down the subject of the painting, now a grown woman. She and her uncle were the occupants of the cottage called Haven House and he is sure they know what happened to the victims. Hazeldean heads to Boulogne after some initial inquiries indicate that Mr. Fenner and his niece were headed that way.

The book begins with the viewpoint of an itinerant pickpocket and thief who stumbles upon the crime scene after breaking into the house through the only open window, shifts to Hazeldean and then Hazeldean and Kendall. When Hazeldean heads off to France (for nearly one third of the book) the book morphs from detective novel into an adventure novel with the reporter as protagonist and Dora Fenner as the damsel in distress. The plot also takes on the air of a romantic thriller with several set pieces featuring our hero and heroine being captured and rescued and several supporting characters filling in as villains of one color or another. This section ends with a cliffhanger and then the story flashes back to England. 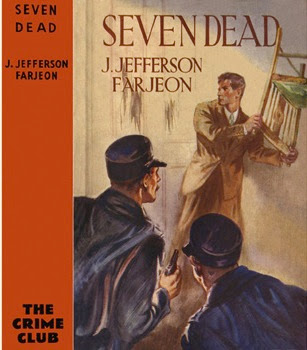 Back at Haven House the narrative style and mood switches back to the original detective novel mode as we follow Inspector Kendall and his police team through their investigation of the multiple murders and their desperate attempt to uncover the victims' identities. Most of all the plot is concerned with why all seven people were dispatched at once in the locked room. However, Farjeon has not devised an impossible crime mystery, for the murderer merely locked his victims in the room and left them to their fate in a fiendishly devised deathtrap. Rather the author is more concerned with the slow reveal of the motivation for the mass murder.

Like a good old fashioned detective novel we are treated to the discovery of tire tracks, footprints, other odd clues, and a mix of insightful deductions based on observation of human behavior. There is a well done scene in which Kendall and his Dogberry-like cohort Sgt. Wade follow the trail of a bicycle and discover the surprise method of the killer's escape. "If you weren't smarter than your conversation, Wade," Kendall says to his sergeant, "I'd have you in the bush to join the bicycle. Fortunately, during the past few hours I've found out that you are much more useful than you sound, even if sometimes it's only by accident." Poor Sgt. Wade is the butt of many such insulting jokes. Not as oblivious as Shakespeare's premiere sputtering and ineffectual head of the night watch Wade is nonetheless included for comic relief.

In the end Farjeon once again resorts to a shift in the narrative point of view and has the entire story resolved in an intricate tale of a shipwreck, survival on a desert island, and a horrific revenge plot all of which is recorded in the pages of a diary. The finale has a tendency to go way over the top in Farjeon's insistence on adding twist after twist, but you can't deny that he knows the definition of thriller when he sets out to write one. Seven Dead is a prime example of Farjeon at the top of his game and exemplifies his hallmark in the genre -- the use of narrative tricks and stylistic experimentation. 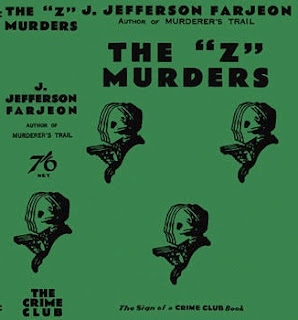 The same cannot be said of The Z Murders (1932), a much earlier effort that owes a lot to the work of John Buchan than it does to John Dickson Carr. Barely containing a smidgen of the usual plot elements of the traditional detective novel though it is in essence the story of the tracking down of a serial killer, The Z Murders is an outright pursuit thriller calling to mind in many of its scenes classic adventure novels like The 39 Steps.

Richard Temperley operating on a mixture of gallantry and instinct goes out of his way to protect a person of interest in a series of murders. In turn he is pursued by police who feel Temperley will lead them to Sylvia Wynne, the person of interest. The murders seem inspired by the kind of thing found in the pages of Edgar Wallace as a crimson Z made of metal has been left at each crime scene. Intended to baffle the police and signify the work of a mad killer working for some secret society a modern reader may easily see through the deception almost immediately. This is the kind of hackneyed device, already overused in the 1930s, is astonishingly still being used by modern writers of gruesome serial killer novels.

Farjeon writes of his characters being "implicated in the same mosaic." Mosaic is a good analogy for this kind of conspiracy thriller. Seemingly random encounters and strangers act as the colored tiles of a mosaic. When assembled together in the proper pattern they create the full picture and lead to a clearing up of the mystery. This "all things are connected" philosophy shows up again at the beginning of Chapter 17 ("What Happened at Midnight"). Farjeon points out the ironic positive effects of crime and uses as examples the taxi drivers and newsboys who benefit from a sudden rise in their income.

Fast paced and action filled The Z Murders' through line is impeded by repetition notably in the tiffs and spats Richard and Sylvia engage in. Sometimes this banter is entertaining and reminiscent of Beatrice and Benedick's sparring wit but in Farjeon's hands each reiteration becomes increasingly annoying. Another irksome gimmick is Richard's tendency to have conversation with himself. His thinking to himself rather than described in prose is rendered as dialogue and the narration even takes on his persona. While this is yet another instance of Farjeon's experimentation I found it to be cutesy and bothersome. Similarly, a Q&A between a police inspector and a "village idiot" rendered as a prose monologue rather than dialogue exists only as a writer's trick and fails to serve the story. The entire middle section of the book drags with the aforementioned tiffs, narrative play and protracted scenes of melodrama. The fifth example of an argument between Richard and Sylvia in which he demands information and she offers nothing almost had me closing the book and never finishing it. 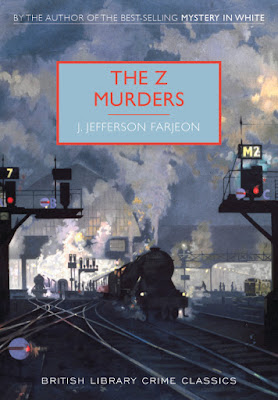 Ultimately, The Z Murders is far too familiar and not as exciting or original as Seven Dead. Why then was something as tiresomely formulaic as The Z Murders chosen to be reprinted while a book as daring and convention breaking as Seven Dead continues to languish in the Limbo of Out-of-Printdom? The mysteries of reprint publishing are often too baffling for me to contemplate.

The Z Murders is available from the British Library Crime Classics imprint. They have also reprinted Farjeon's Thirteen Guests which seems to be more in the line of Mystery in White, being yet another country house style detective novel. I have not read that book, but I'll continue to delve into the work of Jefferson Farjeon. He is one of the most unique narrative experimenters of the Golden Age alongside Milward Kennedy. By the way...why aren't his books being reprinted?
Posted by J F Norris at 10:20 AM