Part of the fun of Rich Westwood's Crime of the Century meme at the Past Offences blog is looking back on the topical elements that may crop up in any given book of a particular publication year. But for two consecutive months now I've chosen a book that is not set in the year of its publication. This month we were to read a book published in 1976. Since another Rich --Richard Robinson of Tip the Wink-- had invited me to help him celebrate his month long Sherlock Holmes reading binge I decided to knock off two birds with one big rock.  I chose Richard L. Boyer's wonderfully authentic, good old fashioned detective-horror-thriller The Giant Rat Of Sumatra.

All you Holmes fans know the title is "the story for which the world is not yet prepared" alluded to at the start of "The Adventure of the Sussex Vampire". Boyer, himself an avowed Sherlockian, does an admirable job at capturing the character of the detective and his doctor friend. Though at times Watson is embarrassingly denser than he usually appears in the original tales and he actually faints at one point late in the book!) and Holmes resorts to some equally embarrassing melodramatic statements that seem over-the-top for even a pastiche I thoroughly enjoyed this book. And this was the second time I read it! I remember coming across the book when it first came out back in my high school days, devouring it in a quick reading immersion. I've remembered it ever since. Reading it again I was happy to discover that it lost none of its entertainment value. It works exceptionally well as a fine tribute and celebration of the great detective, as a somewhat gruesome and horrifying thriller, and as a superb traditional detective novel.

The story is rife with allusions to the Canon with one work in particular being the primary reference point. When Watson is examining the wounds of a grisly murdered corpse he remarks, "They were, I fear, incisors-- or, if we can give even the slightest credence to Sampson's tale, the teeth marks of a giant rat!" You get the idea, right?  Each time the reader spots an allusion to the Canon he would do well to do more than smile.  Make a note of it, write it down, they are as important as the well placed clues. This is a sort of a Sherlockian wet dream of a pastiche. And the ending, I think, is gasp inducing.

There is a kidnapping of young girl, several truly horrible murders, some sinister gypsies, Holmes in disguise at couple of points, and of course that mysterious beast of the title.  What exactly is it?  Do giant rats actually breed in Sumatra?  Read and become enlightened, my friends.  I truly love this book and will say no more about it for fear of giving away some of its wonderful surprises. 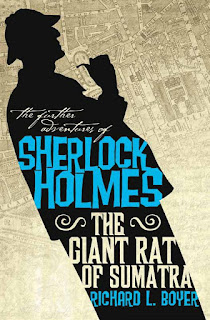 Lucky for all of you The Giant Rat of Sumatra has been reprinted as part of Titan Book's impressive "Further Adventures of Sherlock Holmes" series which includes all sorts of fun pastiches with Holmes and Watson meeting up with everyone from Theodore Roosevelt to Dracula. The book is available in paperback or digital format.  And there are even cheaper copies of the 1976 Warner Books paperback original for sale in the used book market.  So grab a copy now!