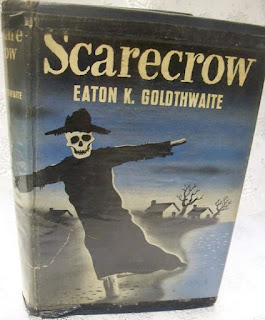 Scarecrow (1945) is a rather fine example of a post WW2 rural detective novel. Two plots unfold simultaneously in Eaton Goldthwaite's densely plotted noirish thriller. On the one hand there is the mystery of the identity of a Navy vet thought to be dead who resurfaces in the coastal Connecticut town. He approaches a plastic surgeon to be "remade", plans to reunite with his wife and take his place as the heir to the Kendall textile mill. The other thread concerns Henry Heath, plant manager of Kendall's mill, who is plotting to take control of the company's stock shares by using to his advantage some unorthodox rules in the company's charter related to preferred and common stock. Playboy Ford Sheppard discovers the scheme and blackmails Heath into making him Chairman of the Board if Heath should be successful in ousting Kendall and his family.

Then two murders occur within hours of one another -- one victim is Ford, the other is an artists' model and Heath's mistress. Could the two deaths be related to the stock scheme? Or is it purely coincidence the two were killed on the same night? And how does the strange disfigured man known as "the scarecrow" figure into the story? Is he really the son of old man Kendall? Or an impostor eager to get his hands on the Kendall's money? 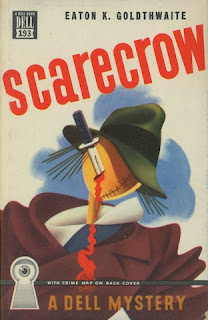 The story is all about self-interest. Money and sex as in most noir thrillers are the motivations. Lt. Joe Dickerson enters the picture as a consultant to the Connecticut State Police and is sickened by the venal people he encounters. Tessie Morgan, who is manipulating most of the men characters, is typical of the murder victims in this subgenre. A go-getter who plies her sexual allure in order to get what she wants but often fails miserably. Dickerson must uncover the multiple relationships both business and sexual she has developed in order to ferret out the reason for her savage murder. While Goldthwaite does rely too heavily on stereotypes of melodramatic crime fiction he also manages nicely with the detective novel aspects of the book.

Dickerson has a knack for reconstructing the crime based on physical and circumstantial evidence. There are two impressive bits of business -- one lengthy scene in which Dickerson and his police colleagues reenact the possible ways Ford Sheppard was shot. By opening and closing a car door in variation the policemen discover the killer must be left handed. The other sequence finds Dickerson, by using only the dimensions of some holes found in the ground near the scene of Tessie's stabbing murder, fabricating a model of the murder weapon. It serves as the major clue in locating the actual missing murder weapon which is cleverly hidden in Tessie's apartment. 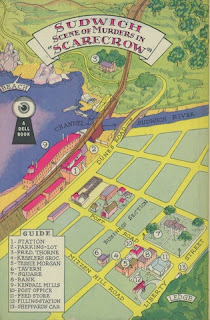 The motley supporting cast are not without some finely drawn and original spins on the usual stock characters. There is the bank teller Harold Finch, a Casper Milquetoast type who turns out to be less than honest. Finch is more than eager to rat on those who wronged him when Dickerson starts to threaten him with arrest for some shady dealings with the contents of Ford Sheppard's security box. Two of the characters helping out Dickerson with the investigation have a knack for criminology. Dr. Swayle, the coroner, dabbles in ballistics in addition to performing autopsies and his knowledge of guns and bullets help solve a few puzzling aspects of one murder while Julian Martens enjoys studying the psychological motivations of criminals and helps shed light on how the two murders might be linked.

Eventually the two plot lines mentioned above converge culminating in a harrowing chase, a shootout on a train trestle bridge and a revelation of the least likely suspect as murderer. This was a refreshing surprise of a detective novel that mixes both the hard edged characters usually found in noir crime fiction with the intriguing and imaginative crime solving of the "Transcendent Detective" of the Golden Age. Goldthwaite veered away from traditional detective fiction favoring hardboiled crime stories in his later career. Scarecrow, only his third mystery novel, is well worth tracking down for what appears to be the transition novel in Eaton Goldthwaite's detour from pure detective novel to noir thriller.