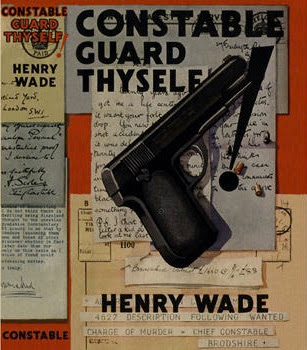 What's needed in any copy of Constable Guard Thyself! (1934) -- at least for a poor ignorant US reader like myself -- is a list of characters with a chart explaining their police rank and where they fall in the hierarchy. Perhaps a brief explanation detailing the difference between police rank and military rank. The complicated and twisty plot in this excellent detective novel didn't confuse me but the way the policemen referred to one another by job title, police rank and sometimes military title was headache inducing. Luckily, I take notes for all these blog posts and referring back to them helped straighten everyone out. This is a police procedural that is very much about job duties, job rank and the policemen's military past. Wade gets a lot of mileage out of all three elements.

The opening chapter introduces the band of policemen who make up the Brodshire Constabulary in the fictional town of Brodbury.  In the first few pages Wade links several characters to one another via their time in France during World War 1. After some rambling and reminiscing about the war from visiting General Cawdon the talk turns to Albert Hinde, a recently released prisoner who had been sent to prison for poaching and murder.  He was one of three arrested but the only one brought to trial.  The others became soldiers but lost their lives during the war.  Coincidentally, those two men were under the leadership of Captain Anthony Scole, the current Chief Constable at Brodbury police station.  These two incidents -- military service at Somme and how the three men were caught during a night time police stakeout -- are not mentioned in passing as colorful background.  They turn out to be the most important elements of the intricate plot.

You can see already that the use of Captain and General was confusing to me. Unlike US police ranks which borrow sergeant, lieutenant and captain from military ranking British police ranking has its own peculiar set up. Though Scole is a policeman and a Chief Constable he is repeatedly referred to as Captain Scole, a reference to his military rank back in the days of WW1. I was reminded of the hundreds of Chief Constables in books by the myriad writers I've read in the past who were Colonels in one army or another and still retained use of that rank. Took me to this long to realize that the military rank and the title of Chief Constable were completely different. Adding to my confusion is the fact I had always thought a Chief Constable was an appointed position in rural areas where police departments were made up almost solely of constables. Call me a slow learner. Took me to about the halfway mark to get used to the mix of military and police ranks.

But back to the engaging story of this very modern police procedural...

Hinde harasses and threatens Scole both in person and in letters. A few days later Scole is shot dead in his office at the station. Suspicion immediately falls on the ex-prisoner and the hunt is on for him.  Begrudgingly, Superintendent Venning (now the acting Chief Constable and in charge of the station) calls in Scotland Yard and they send over Inspector Poole and Detective Sergeant Gower, two of Wade's series characters. After a day or so of bristled relations between urban and rural policemen and an odd admission of somewhat unethical police procedure on Venning's part, the two agree to put aside their prejudices and work together on finding the real murderer of Capt. Scole.

As evidence is uncovered and alibis are made clear all are astonished that Hinde could not have committed the murder. When letters hinting at blackmail and a scandal within the Brodbury police department are unearthed Poole is convinced that a policeman killed Scole. Furthermore, Scole was hiding a personally amassed fortune of close to forty thousand pounds and was parsimonious and secretive about his money. He kept control of his wife and daughter by giving them mean allowances leading them to believe he was not well paid. Motives for murder begin to multiple and the suspect list slowly grows.

Overall, the book has a surprisingly modern feel to it.  The way the characters talk to one another, the detail of the police relationships both professionally and personally, and the urgency with which the police behave towards finding the killer of one of their own are all hallmarks of a thoroughly contemporary crime novel. Remove the talk of World War I and this might read like any modern day bestseller.

Wade also has a talent for making each character uniquely human.  We learn that Inspector Tallard is an amateur magician who entertains at children's parties, Gower has skills of a gymnast that come in handy when asked to scale a rain pipe in a reconstruction of the crime, and Venning's attempts to be the station ballistics experts are fraught with human error. Scole's daughter likes Poole because he is down to earth and easy to talk to not all stuffy like most of the policemen she has met.  She has a few amusing scenes when after receiving her inheritance she buys a new car and takes Poole for a reckless joyride around town nearly causing several motor vehicle accidents along the way.

This is a rather hard to find title in Wade's prolific output. It's too bad it's so scarce because I found it fascinating on all levels. If the identity of the murderer is perhaps too easy to discover through a few blatant clues in the very first chapter it is no fault of Wade's. He more than makes up for that slip with an elaborately constructed story, multiple twists and sub-developments, and a cast of very human and complex characters.

One of the Detection Club's founding members Wade was highly regarded by his peers as an ingenious plotter. If Constable Guard Thyself! is considered one of his weaker efforts I am eager to read more and find out how he can improve upon his talents so obviously on display here. This one is enthusiastically recommended with all its minor faults. But good luck finding in a copy!

GOOD NEWS UPDATE! Of all of Henry Wade's book this one is the only title available for a free download from Hathi Trust Digital Library.  Click here for the book. And happy reading!

Reading Challenge update:  I read this for Rich Westwood's monthly Crimes of the Century meme. During June we were to read a mystery published in 1934.
Posted by J F Norris at 1:02 PM