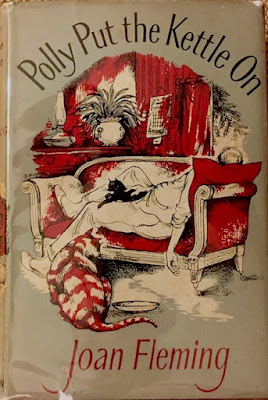 Could this be the only nursery rhyme that Agatha Christie left untouched when she plundered the pages of Mother Goose for inspiration in plots and quaintly ironic titles?  I think it's an unfortunate tongue in cheek choice on Joan Fleming's part. Although there is a character named Polly in Polly Put the Kettle On (1952) and there is a tell-tale kettle left boiling on a stove as a clue to murderous intent the tone of the book does not lend itself to ironic or cutesy titles. This may be why it's one of Fleming's least known books.  It never received a reprint in either her home country or overseas here in the US where nearly all her books were reprinted in easily obtainable paperback editions. Such a shame because not only is it her only locked room detective novel that I have so far encountered, but it also seems to be her homage to James M. Cain.

Derek St. George Sudley has been released from prison in the opening pages of the novel. He intends to stay away from the city where he got himself into trouble and eventually arrested for robbery with violence.  Now having served three years of a five year sentence he's out to make a better life as a laborer. After a few words of advice he learns that Hill Farm may be looking for a new gardener and having spent much of his time tending to the ground of the prison gardens George (as he prefers to call himself) heads to the farm to meet with Eli Edge, his soon-to-be employer.

A gardener is not really what Edge needs. Instead, he offers George a chance to be a farmhand and help out with the cows in the dilapidated barn. Not exactly thrilled with this substitute job George is about to turn him down but when he catches a glimpse of Edge's extremely attractive and much younger wife, Polly, the former prisoner quickly accepts. Hard work might be easier on the hands with such a sight who's so easy on the eyes. And here we enter the territory of Cain with the ex-con trying to make the moves on the brutish husband's wife and the wife doing her best to ignore the hired hand's obvious advances. She's one of those ladies who protests too much and George knows how she really feels. You can bet that no good will come of their trysts in the barn.

But George is not your typical ex-con. He's an exceptionally literate former burglar.  He freely quotes Francis Bacon, Thomas Mallory and John Keats.  In his first person narration he sprinkles literary allusions with the ease of an Oxford don. There's even an ironic reference to George Eliot's The Mill on the Floss which will make sense to anyone familiar with that novel that features quite a bit of repressed sex and sudden bursts of passion in the Yorkshire countryside. With the entrance of Madge Clay, a neighbor who breeds Keeshonds on her nearby farm, we have the addition of another woman interested the virile George.  Madge with her vulgar humor, her lust for life and liquor, and a very forward pursuit of George is an obvious foil for the prim and obedient Polly. But of course it is always the forbidden often married woman that these men would rather pursue and never the single very available and readily willing woman. Madge warns George to stay away from Polly, that Eli is not the dumb farmer George may think he is. Trouble is a brewin', my friends. And it ain't tea Polly will be making when she puts her kettle on. 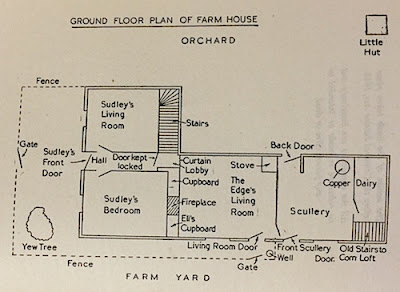 Unlike Cain, however, Fleming with her inimitable flair for breaking free of crime fiction expectations includes some clever misdirection. George, who is at first presented as nothing more than a Lothario, becomes rather quickly a figure of sympathy. When Eli Edge is removed from the story in a mysterious accidental death by poison gas, and is found in a locked room from which his pet dog Argo seems to have also mysteriously vanished, suspicion inevitably falls on Polly who seems to be the only person who could have tampered with a coal gas burner in the room where her husband died.

The plot is complicated by a series of incidents in which George quite innocently was trying to help improve the farm with plumbing upgrades and by teaching both Eli and Polly to drive the new Land Rover he convinced Eli to purchase. The farmer been very tight with his money for years until George cajoled him into spending money on the improvements and the vehicle.  No reason to live like 19th century country bumpkins with an outhouse and walking miles to fetch water for the cows when they can have modern plumbing.  Fleming, of course, has a few tricks up her sleeve.  Eli proves to be a poor driving student and a variety of accidents befall him and Polly while he is at the wheel and occur in such a way to implicate George as well.  Things do not look good for George when the police learn those accidents occurred only a few days prior to Eli's death. Discovery of a couple of dead cats near the sofa where Eli's body is found also indicate possible foul play.

George finds himself a victim of circumstance constantly at odds with the police, Madge and Eyvind, the ex-German POW (with a Norwegian or Icelandic name?) who at one time worked at Hill Farm and returns quite unexpectedly in an attempt to win back his job. George not only tries to prevent everyone from discovering his secret of being a former prisoner but tries to shift all blame to Polly who he no longer trusts. As in Double Indemnity when Walter Huff begins to suspect Phyllis of using him George turns on his paramour. He becomes an amateur sleuth doing his best to solve the mysteries of how the dog got out of the locked room and how Eli was poisoned. But it is Eyvind who will prove to be George's greatest adversary not Inspector Hope, the police inspector who has trained his eye on George as the prime suspect.

Luckily, in this renaissance of vintage crime novel reprinting we are experiencing of late Polly Put the Kettle On has been reissued from Orion Books in a new digital version. But it is only allowed for sale in the UK. Used copies of the briefly reissued paperback (or the original hardcover) might also be available to an assiduous book hunter no matter where you live. With a few clicks of your keyboard you'll soon have your hands on this very fine crime novel that blends both traditional detective novel with the impossible crime novel as well as a noirish thriller that would impress Cain and Highsmith. 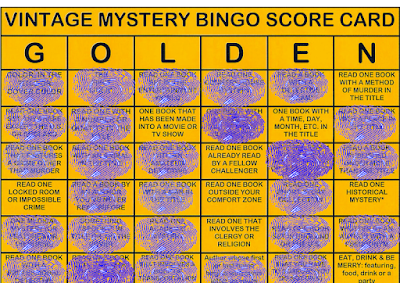 Reading Challenge update:  Golden Age card, space O6 - "Woman in the title"  Et voila!  My first Bingo in the O column. I've now officially completed the challenge. But I persevere in my attempt to fill the card!
Posted by J F Norris at 11:53 PM