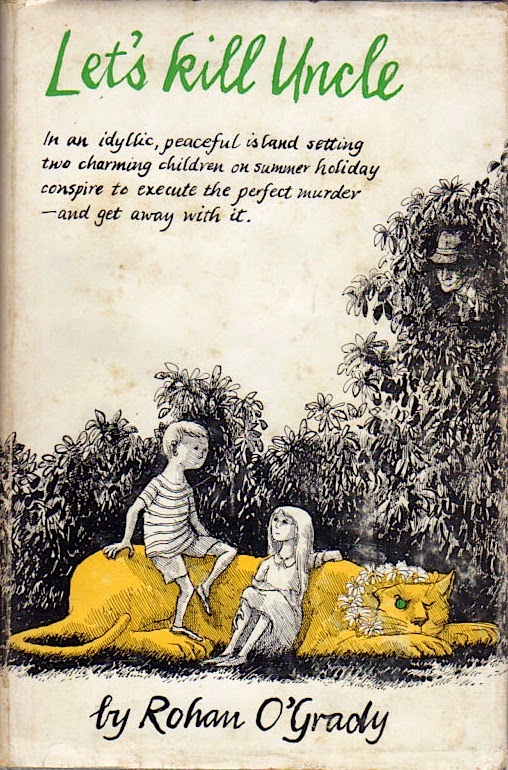 I've known about Let's Kill Uncle (1963) for a long time.  But I only knew the movie version as adapted and directed by William Castle. For a teenager growing up in the 1970s that movie was pretty wild stuff.  It's stayed in my memory ever since I first saw it. Two teenagers in fear of their life plot to do in their nefarious uncle, a former commando highly skilled in martial arts and assassin techniques, before he kills them first. But having seen this movie only twice in my life I was not at all prepared for the book.  The only thing the book and movie have in common is the basic plot and the two first names of the children who are only 10 in the book.  Everything else is completely different.  And the differences are even more wild than the movie.

Rohan O'Grady (pseudonym for Canadian writer June O'Grady Skinner) has concocted a fantastical story that is a glorious mixture of Grimm's fairy tales, macabre black comedy, ecological critique and a whole lot more.  It's one of those rare books that defies pigeon holing and classification of any kind.  So unique and original in every facet it's hard to believe why Castle decided to change the movie and in effect cheapen everything that makes the book so odd and bewildering, charming and bewitching.

Did I just call a book about two potential child murderers charming?  Yes, I did. These ten year-olds, first introduced as holy terrors having nearly destroyed an entire ferry and terrorized the passengers while crossing from Vancouver to an unnamed Gulf Island, undergo a magical transformation in a matter of days. It's as if the Canadian island where they have been sent for a summer vacation has truly cast a spell on them.  But in truth it is the subtle manipulation of the adults who have little patience for bratty kids that has a positive effect on these little monsters. As the story progresses Barnaby and Christie grow to be great friends and their pact to do in the thoroughly diabolical Uncle Sylvester while fraught with danger and peril is really no more horrifying than Hansel and Gretel shoving the witch in the oven.  It's a matter of survival and an eerie rite of passage. Even as they plot to kill Uncle they also plan to blame a mentally disabled young man they have befriended.  But wait -- how can that be charming? I'm at a loss to explain it all.  By rights it should be revolting, and yet the outrageousness never once seems vulgar or offensive.

June Skinner's writing is the key. She guides the reader masterfully avoiding all the pitfalls of quaint and cutesy incidents and never once veering into self-parody.  For the first half I kept asking myself it if it was intended for children.  Past the midway point it is clear that children are not Skinner's main audience, though I imagine her adult themes (elitism and racism, ravages of war, destruction of wilderness and its consequences, among others) perhaps have a powerful resonance for modern young readers. Still the writing has a quiet soulful mood so peculiar to the best of children's books, one in which a sonorous voiced narrator is telling a bedtime story. You're lulled into a world where the writer paints rich pictures of a rural Canadian village, gives each supporting character deep meaningful lives and sharply voiced dialogue. She even gives thoughts and human emotions to animals just as in a fairy tale.

We get to know the animals just as intimately as we do the human characters, especially how they feel about the humans they encounter. There is a misanthropic bull named Iron Duke also plotting a death wish for his cruel owner.  There are dogs, cats, horses, and even a budgie all getting their chance to shine over the course of the novel. Most importantly there is ol' One-Ear, a cougar as battle scarred and world weary as Sgt. Albert Coulter, the local Mountie still haunted by dreams of being a prisoner of war.  Coulter and the cougar have a lot in common and Skinner does an impressive job of tying these two together over the course of the story.  How many books have you read where a mountain lion is given to expressing ennui when faced with the choice of turning vegetarian or starving?

Remarkably, Barnaby and Christie manage to befriend this cougar suffering from a poor diet and a weltschmerz that nearly outdoes Young Werther's.  Too exhausted to chase them away or frighten them with a roar One-Ear becomes their playmate and surrogate pet. Barnaby and Christie grow to be friends yet also seem to transform once again into miniature adults playing house with One-Ear as their adopted child.  Just as the adults of the Island have managed to tame the little monsters from the ferry these two children seem to be taming a wild beast.  Barnaby never forgets their mission, however, and soon he finds a way to add One-Ear to the plot to do in Uncle Sylvester.  Will it all go according to plan?  Little do the children know that Uncle has been spying on them with the aid of his high powered binoculars and his surefooted jungle tracking skills.  Just how much has he learned about their plot?  Who will get who? 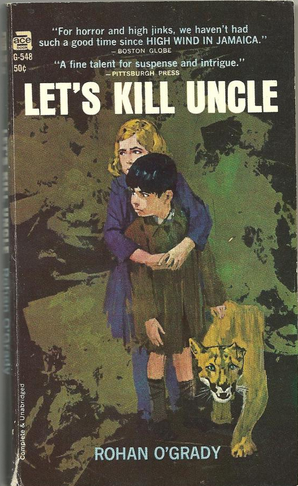 Woven around the duelling murder plots we get a fascinating character study of Sgt. Coulter.  He has fallen in love with the wife of the Island's vicar and every night he writes a love letter to her, sharing with her his doubts, fears and hopes for the two kids to whom he has become both a guardian angel and surrogate parent.  He never mails these letters. Just as soon as he has finished pouring out his heart and soul he rips up the letter. Coulter is the most intriguing character in the book, complex, conflicted, compassionate and impassioned. We learn he is probably the only member of the Royal Mounted Police who hates horses. We watch him suffer through nightmare flashbacks to the POW camp and his haunted visions of the aftermath of the concentration camps he was forced to visit before being sent back to Canada. His story is both humorous and poignant and yet another example of how Skinner has crafted a beguiling story.  There's so much more to this novel than what the title implies.

For a long time this was a very hard to find this book. Luckily, for all it is now readily available in both a paperback edition and digital book from Bloomsbury in their marvelous series that also brought back into print Miss Hargreaves, A Kid for Two Farthings and other well-loved but sadly overlooked novels. Anyone interested in reading one of those rare indescribable books, one that reads like no other you've read before, ought not to be put off by the title or the cult movie.  Let's Kill Uncle is quite a magical and unforgettable reading experience.  In fact, I can't wait to read the book all over again. 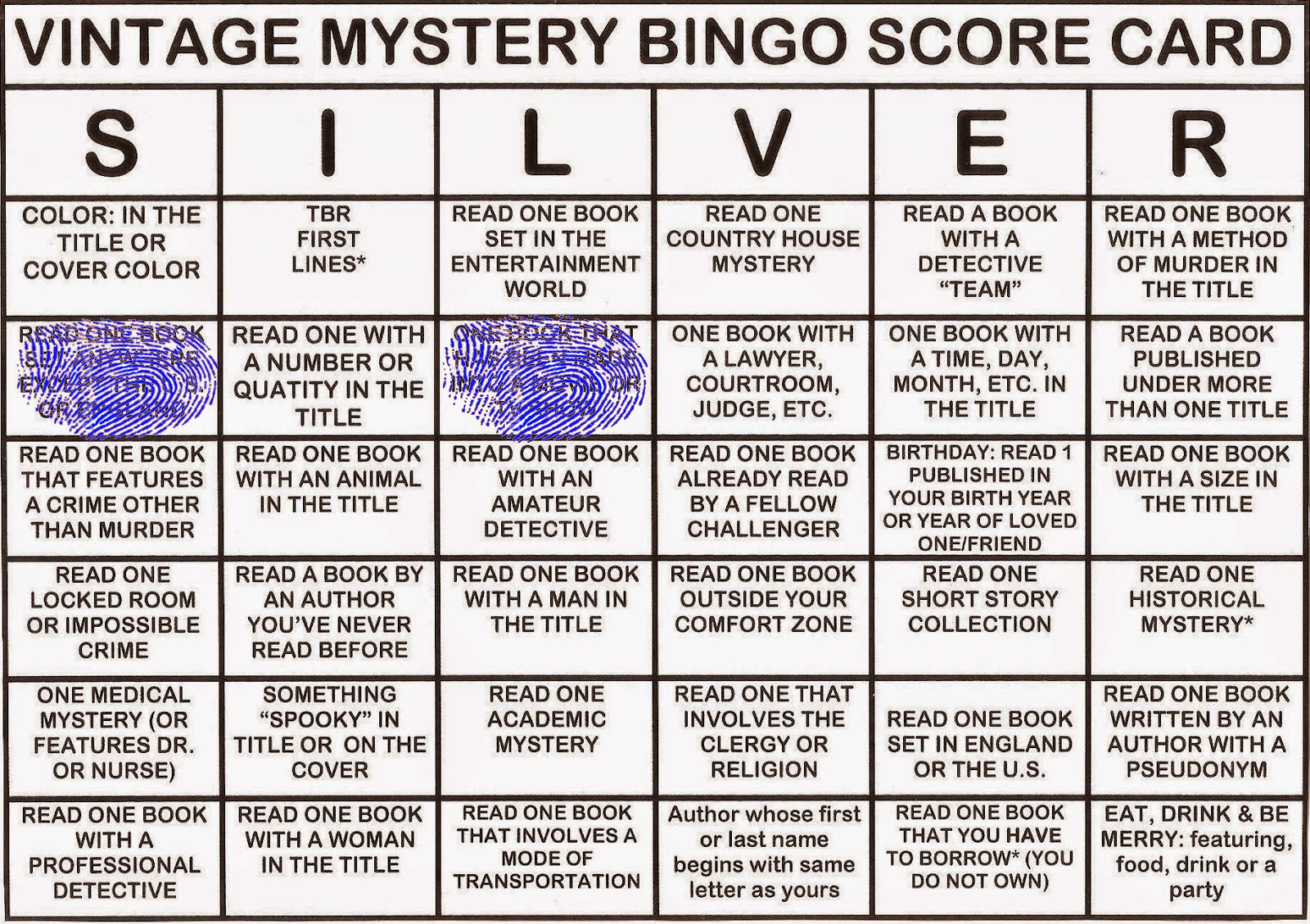