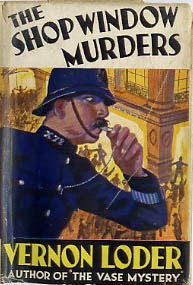 Tobias Mander is the founder and owner of Mander Department Store, his brainchild for an innovative place that will combine "cheapness with luxury." He also is an airplane fanatic and has an engineering lab in his home. Having procured many of the best experts in the retail trade he is set to open the flagship Mander store to the accompaniment of much fanfare. One of his more audacious publicity stunts was to have his new design for a portable gyrocopter unveiled by having the flying contraption land on the roof of the store much to the chagrin of police and local authorities who felt it unsafe. He dubbed the invention the Mander Hopper. Marketed as "a plane you fold up in a room and land in a tennis court" the retail wizard was planning to sell them his store and was taking orders prior to starting a manufacturing line. All those plans come to a crashing halt when Tobias Mander is found dead during the opening festivities. Someone shot him, dressed him up as a mechanic, and placed him among other mannequins in a display window at the front of the store.

All this unfolds in the first chapter of The Shop Window Murders (1930) one of Vernon Loder's more complicated and highly unusual detective novels. The events at the store's gala opening become stranger once the police arrive. They find that one of those storefront mannequins, a woman dressed in an outlandish costume adorned with a print that advertised the Mander Hopper, is not a mannequin at all. It's Effie Turnour, fiancée to the store's manager Robert Kephim. And she's dead too. She's been stabbed and placed in a chair in an unflattering pose right next to Mander's corpse. Someone obviously was not happy about Mander's plans to take over the retail world.

Enter Inspector Devenish, another of Loder's humane and intelligent policemen. He's willing to admit he's flawed, eager to listen to what everyone has to say no matter how hysterical or ranting they become. But woe to the fiendish murderer behind these bizarre crimes for Devenish is sharp enough to envision all angles and possibilities. During the investigation he uncovers department store rivalries, a conspiracy behind the actual identity of the inventor and desiger of the Mander Hopper and a hotbed of vice among the store's employees.


The cast of characters is a lively one. There's Mann, a night watchman who turns out to be another in a long line of mystery fiction characters similar to Sayer's Bunter and Allingham's Lugg. Mann was a batman to store executive Jameson Peden-Hythe during WWI and he still retains a loyalty to his older comrade who saved his life on the battlefield. Devenish suspects Mann assumed Peden-Hythe guilty of the murders and in order to protect his battleground Samaritan altered the crime scene and manufactured fake evidence. Or how about Webley the embittered and hostile mechanical engineer who claims that Mander stole the design from him? He's suspect number one in Devenish's book. Webley's belligerent attitude doesn't help clear his name any faster even though he seems to have an ironclad alibi. There is also Mrs. Hoe, a shrewd journalist always popping in at the most unexpected times. Devenish is impressed by her insight and intelligence. But Mrs. Hoe is hiding a secret of her own and has an interest in the murders other than great newspaper copy and eye-catching headlines. She is keeping tabs on a couple of the suspects for more personal reasons. Finally, there is a platoon of Loder's usual lower echelon policeman some of whom provide comic relief. One able-bodied sergeant in particular is responsible for uncovering the most unusual piece of evidence that eventually leads to the startling conclusion.

I'd love to go into great detail about the denouement which once again showcases Loder's most unique trademark in all his detective novels, but I'd definitely be giving away the game if I elaborate any further. Suffice to say that Loder is fascinated with the idea of criminals who get their comeuppance even before the police know a crime has occurred. There always seems to be one victim who falls prey to their own scheming.

If you are ever lucky enough to come across a copy of The Shop Window Murders (yes, my friends, it's an incredibly scarce title) you ought to snap it up. This book is not only entertaining it may be Loder's most complicated and original spin on a gimmick he seems to have invented. If he didn't invent it, then he certainly perfected it. Other than in the work of Anthony Wynne, who has his own favorite tricks like the twice murdered corpse, I have yet to come across so many variations on such an odd idea for detective novel crimes. While I'm recommending this book I would suggest you keep your eyes out for any book with the Vernon Loder pseudonym on the cover. They make for fascinating reading and are as different from the standard whodunits of his colleagues as champagne is to soda water.

UPDATE: Fantastic news! As of November 2018 The Shop Window Murders has been reprinted by HarperCollins as part of their continuing reissue of all of the books in the Detective Crime Club Classics imprint which originally appeared in the 1930s. The book is available in hardcover or digital editions. I hear that I'm mentioned in Nigel Moss' introduction. And this blog post is quoted on the DJ. Exciting!
Posted by J F Norris at 10:37 AM