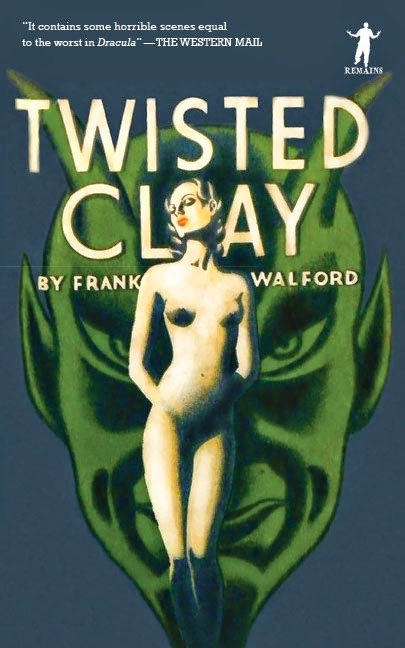 Jean Deslines is worried about losing her identity.  Her father keeps talking about putting her away in a mental institution for her own safety. Jean has been bragging about her flirty seduction of the local clergyman in her Australian home of Katoomba. She's also been reading up on psychology books at the suggestion of her cousin Myrtle who knows a psychosexual aberration when she sees one. Now Jean's head is overloaded with Freudian psychoanalytical jargon and discussions of female hormones, the lack of which she believes is at the root of her troubles. She's also starting to have surreal dreams in which she envisions a female gladiator who takes the form of the goddess Minerva slaughtering her enemies. And every now and then she hears the sounds of bells and an ethereal voice giving her private instructions on carrying out the murderous events in her dreams. Is it any wonder her father is worried about her? Oh, I forgot to mention Jean is only fifteen years old.

To preserve her identity and prevent any tinkering with her mind and soul at the hands of interfering psychiatrists Jean is advised by that Voice to murder her father. And she does so in a lovingly savage way. It's the beginning of her descent into a surreal world of hallucinations, indulgent sexuality and violent murderous attacks. Imagine if you will a most bizarre mix of the selfish child murderess Rhoda Penmark, vindictive pathological liar Mary Tilford, and seductive teen age vixen Lolita and you have only a smidgen of an idea of what Frank Walford has created in Jean Deslines. It's difficult to believe that a fifteen year old girl is narrating this lurid tale of madness, pansexuality and brutal murder. Jean may very well be crime fiction's first bisexual serial killer.  Oh, I forgot to mention that Twisted Clay was published in 1933.

This week Patti Abbot Asked us to read a book about a femme fatale. Though typically we don't find a femme fatale this young until the pulp writers of the 1950s in books by writers like Gil Brewer, Day Keene and Jonathan Craig and most of them aren't clinically insane Jean Deslines is about as fatal a femme as you can find in the genre fiction of the 1930s. So horrific are the events described in Walford's book it was banned almost immediately upon publication and remained out of print for decades. Modern readers will find so many of what is now considered formulaic in serial killer literature and yet no one was writing about such things in Walford's time. Even Lawrence Block didn't write about a serial killer prostitute until 2012's Getting Off and even then he used his lesbian erotica pseudonym Jill Emerson. Walford was way ahead of his time in creating his surreally intellectual, linguistically gifted and very dangerous teenager. Way, way ahead.

Twisted Clay has been reissued by Australian British indie press Salt Publishing under their horror imprint Remains Classics in a handsomely designed facsimile of the original first edition complete with replication of the original dust jacket. The book comes with a foreward by Remain's editor Johnny Mains as well as a biographical and literary introduction to Frank Walford by critic and supernatural fiction maven Jim Doig. It's a fine reissue of a landmark book in the genre. Highly recommended for literary connoisseurs, genre fiction addicts and anyone curious about those obscure books that sometimes reach legendary status due to their unavailability. This is one instance when the legend cannot even approach the actual content of the book.

For more wicked women, amoral temptresses, and literary femme fatales in forgotten books of the past visit Patti Abbot's blog.
Posted by J F Norris at 12:00 AM