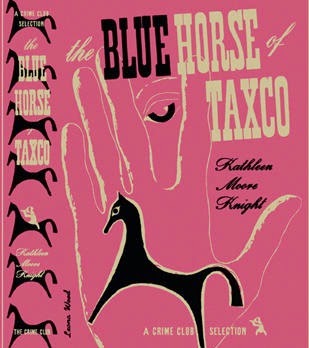 Troy Bannister has flown to Taxco from her safe New York job at Frobisher’s where she is the jewelry buyer. She is to judge a contest of silver designs and the winner will be set up in a private studio to make a line of custom made jewelry for her employer. The contest was her idea and the winner unbeknownst to her employer has already been chosen. He is Jerome Blake, her old flame whom she has tracked down to Taxco. She is sure that when he is chosen the winner and given the $5000 prize money plus the opportunity to work in his own studio back in New York that she will finally have a chance to win him back and marry him. But when she learns of a local silversmith who is regarded as the best of the contest’s entrants she sees her deceitful plan start to crumble. She must see exactly what this talented artist, an immigrant Polish man named Casimir Lazlo, can create and if is indeed a superior craftsman find a away to eliminate him from the competition.

Someone does that job for Troy. Shortly after she has met Lazlo and seen his exquisite workmanship on an intricately stamped necklace, he is murdered. Troy’s guilty conscience and unethical ways get the better of her. Imagining the worst and thinking that she might actually be thought the killer she stages the scene of the bloody murder to look like a suicide. She flees Lazlo’s studio but not before impulsively stealing the copper plate that made the beautiful design in the silver necklace. All of this occurs in the first two chapters. This is our protagonist? Knight seems to be writing a Patricia Highsmith novel with a love mad female version of Tom Ripley, a woman who cares for no one really but herself.

Soon word is out that Casimir has committed and suicide yet no one can believe it. The other artists who have entered the contest recognize that their chances are now greatly increased for winning the coveted prize money and the job as jewelry designer in New York. But someone suggests that Casimir was murdered in order to achieve that advantage. When they also discover that Troy had visited Lazlo prior to the judging day they are in a furor and begin to think that the contest was rigged from the start. Troy has few friends among the artists including Jerome, living under the alias of Joe Blank, who is quick to uncover most of Troy’s deceit and her involvement in Lazlo’s death. Eventually it is Jerome/Joe, with the aid of Lazlo's daughter, who will take over as the lead character and solve not only Lazlo's murder but another murder of a local Mexican artist who was secretly entering a creation of his own in the contest.

The tone and language of The Blue Horse of Taxco (1947) is completely different than the Elisha Macomber (her best known series detective) novels in Knight’s early writing period. It’s darker, not at all lighthearted, and fueled with the illogical passions of impulsive desires not unlike the novels of pulp and noir writers. She is finding a way to tell a story of crime without resorting to old-fashioned thriller tropes and set pieces that seem lifted from cliffhanger serials. Gone are the quaint clues and girl sleuthing sequences found in her early books. Knight’s focus now is on character as opposed to multi-layered puzzling plots which is not to say that she has completely abandoned the puzzle. There is still the mystery of the pieces of the figurine of the title that will feature in the plot. But overall the story arises out of the characters’ behavior and thinking and their relationships not an artificial manipulation of events created only to bamboozle the reader.

(The above is a slightly edited portion from a longer essay on Kathleen Moore Knight I wrote for issue #68 of Geoff Bradley's fine journal Crime and Detective Stories (CADS). The issue will be coming out in a few months.)
Posted by J F Norris at 12:00 AM