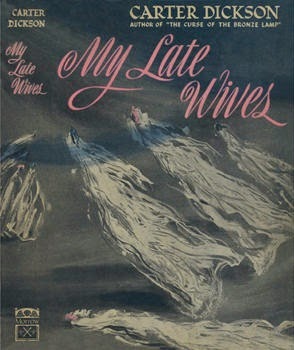 "If there's any flumdiddling of the police to be done, I'm the one to do it."

There is a lot of flumdiddling and farcical doings amid the criminal mischief and baffling murders in My Late Wives (1946), Carter Dickson's follow-up to the infamous The Curse of the Bronze Lamp.  I say infamous because in that book Dickson included a kind of twist that I consider something of a cheat in a murder mystery.  The rear panel on the DJ for My Late Wives hints that Dickson has surpassed the impossibilities of his previous book.  Did he really write a better mystery?

The story is pure fancy, one that could only take place in the pages of a detective novel. We learn that someone has written a play based on the life of a murderer and sent the script to a well known actor. His friend and colleague, Beryl West, would love to direct the play even though it may be libelous but it has a weak ending. The play is based on the life of Roger Bewlay, a known multiple murderer who killed and disposed of the bodies of his four wives. The requisite Dicksonian impossibility appears in the last murder. Bewlay managed to murder his wife in a house watched by two policemen and witnessed by another woman outside. But when the police broke into the house there was no sign of a murder and no body. What happened to the murder victim? And what happened to all the other bodies of his dead wives?

Bruce Ransom, the actor who receives the play, is challenged by Beryl to act out in real life the part and test the weak ending of the play. He is to pretend to be Roger Bewlay, court a young woman and all the while let slip that he is a wife killer and let that spread throughout the town. Then just as the girl is ready for Bruce to ask her to marry him he reveals that everything is a sham. He's really an actor and he's not a murderer at all, that it's all research for an upcoming play.  Crazily enough, Ransom accepts the challenge and the story takes off like gangbusters.

Enter Sir Henry Merrivale explosively. Literally. He makes his appearance in this novel accompanied by his Scottish golf instructor in an amusement arcade which he manages to destroy in one of Dickson's usual over-the-top low comedy sequences. As extreme as it was I burst out laughing. I guess I needed a dose of Three Stooges style nonsense that day. The book is filled with these usual blustery Merrivale escapades. A silly fight on a golf course and the following argument initially seem like filler, but will have greater significance in the final pages. However, it's one of the least clever bits of misdirection in the book, one that led me to the solution of how Roger Bewlay's victims were disposed of. 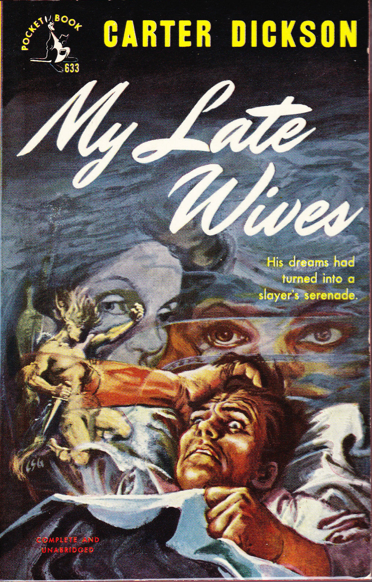 Merrivale is not really onstage all that much and that is part of the problem with the book. Though he gives a lot of advice to Dennis, Beryl's lawyer friend, and drops hints that he knows the real Roger Bewlay has shown up in the town where Bruce is doing his play-acting/research he does not really solve the case. Dickson allows the actor to have a melodramatic confrontation with the killer that might as well have taken place in a theater while Merrivale, Dennis and Beryl watch in an adjoining room. Bruce nearly is done in by the maniac and Merrivale steps in at the eleventh hour to stop one last murder.

The plot is difficult to summarize since the playscript, the story of Roger Bewlay's life of crime, and Bruce Ransom's "research" all intersect and overlap as the novel progresses. There are multiple mysteries to solve and it got a little dizzying for me as Merrivale tried to explain to Dennis and Beryl how he knew Bewlay committed all his wife murders, knew where the bodies were hidden and hinted at one more murder that might take place. Of course it does occur and both Denis and Beryl are devastated that they could have prevented it if only Merrivale hadn't been so damned ambiguous.

Such is the world of John Dickson Carr and Carter Dickson. His plots are all fancy and contrivance.  Who would ever write a play based on a murderer's real crimes, divulging previously undisclosed evidence, and then send it to an actor? Wouldn't someone just call the police and tell them what they knew? Asking questions like this when reading a book by Carter Dickson or John Dickson Carr is futile. You must surrender to his fantastical plots and absurdities or the book can never be enjoyed for the baffling puzzle it ought to be.

This counts as another book on my Golden Age Vintage Mystery Reading Challenge bingo card.  I've counted it as space G6 ("A Book Set in the Entertainment World").  I seem to be doing this haphazardly with no intention of trying to get a Bingo line, right?  But there is indeed a method to my reading selections. Solve that mystery if you can! 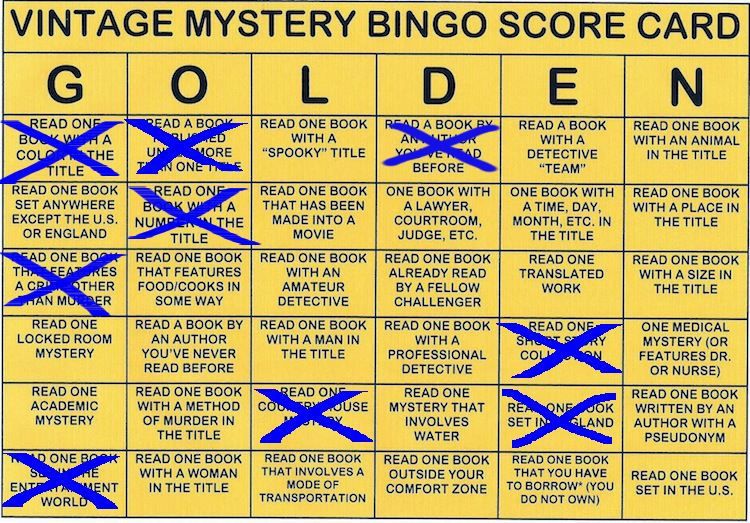