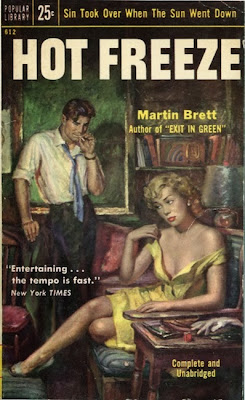 Michel Garfin is the man to go to in Montreal if you have a particularly nasty family secret you need to keep quiet. But call him Mike.  Only the Chief of Police calls him Michel and only because he doesn't speak any English.  Oh, and while we're talking about his name its GAR-fin, pronounced just like its spelled, not Gar-FAN as if it were French. He's Irish/French Canadian and though he's bilingual and lived in Montreal most his life where he was once on the Royal Mounted Police Force he could have stepped out of an office in Hammet's San Francisco or Chandler's L.A.  Hot Freeze (1954) marks Mike Garfin's first appearance out of three crime novels.

Montreal is a frigid violent world of illegal casinos luring gamblers to the barbotte and fan tan tables, brothels where the prostitutes serve as both companions and informers, and home to a wealthy dysfunctional family that would be all too familiar to Lew Archer or Philip Marlowe. The sexual imbroglio in the Astley/Remington household may call to mind the tawdriness of The Big Sleep or the family secrets that dominate Ross Macdonald's novels. But its the omnipresent, near paranormal influence of the wintry weather in Montreal becoming a formidable additional character almost as brutal as the human villains that reminds the reader he is far from the mean streets of California.

Mike is hired by Mrs. Remington to find out how her son Gerald is obtaining such a large amount of money. He receives an allowance but his ostentatious spending raises suspicions. He must be getting more money from some other source, she thinks. Mike soon learns that there are actually two families in the Remington home and that Mrs. Remington was previously married. Gerald and his sister Geraldine provide us the earliest examples of the unbridled sexuality that pervades the book. 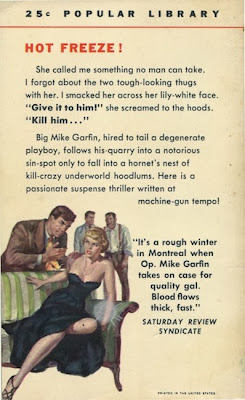 Gerald is yet another of the handsome indiscriminate gay men, always flirting, always alluding, that one finds in 1950s private eye novels. It's his sex life that triggers the blackmail flag in Mike's mind as the possible source of the extra money. Geraldine is clearly a Carmen Sternwood knock-off but her insatiable taste for men eventually unearths a surprising facet to her character that all but erases any reminders of Chandler's teenage nympho. Then there's Marian, Mrs Remington's stepdaughter, who makes all too clear that she despises all of the Astleys and resents them living in her home.

Originally Mike plans to tail Gerald, find out his habits and bring the case to a quick close. Mike is sure that Gerald is blackmailing some wealthy influential man who can't risk having his sexual predilections uncovered. But Gerald surprises Mike by inviting him along to a barbotte casino and all thoughts of blackmail are almost entirely put out of Mike's mind when he sees how incredibly lucky Gerald is at the gaming tables.

Enter Tom Littleton, Mike's one time partner in the Mounties when they were both cops back in Winnipeg. Littleton is undercover as part of a narcotics investigation and he urges Mike to keep him that way by not mentioning his name. Mike in order to save his hide, however, lies about working with the RCMP and lets slip Littleton's name. When he returns later that night to find Littleton dead in the courtyard of his apartment building he is devastated. Up to this point Mike was all tough guy like many of the eyes of his day, but now we see a new side. A crowd of gawkers gather round the fence when Littleton's body is being taken away and Mike overhears them gossiping about another dead drunk who froze himself to death.


I kept my mouth shut, not answering any questions. I climbed into the back of the wagon when they were ready to go and sat near the bunched up thing that had been Tom. Grown men, they say, don't have such emotions. Grown men do. I sat with the tips of my fingers touching his frozen head and vowed to do slow murder to avenge this one. 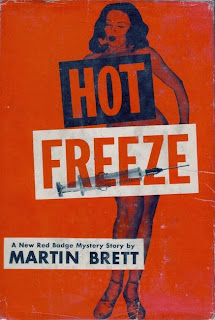 The addition of this fraternal love between former police partners at times is heartbreaking. Mike is overcome with emotion several times during the novel. He suspects an insidious murder method and when it is confirmed that drugs are involved it only fuels his vengeful drive.

Brett toys with Chandleresque prose but makes it all his own as Montreal and Canadian culture dominate the proceedings. Hot Freeze is one of the better examples of a private eye novel that will appeal to a variety of crime fiction tastes. Enough tough guy manner and sex to satisfy the hardboiled crowd, real crimes committed for believable reasons for those who crave documentary style realism, quirky characters of truly original molds (including an acrobat dwarf with a sadistic side!) for lovers of offbeat fiction, and good investigating with a few examples of well placed clues for the detective novel fans. Above all there is an humanizing emotional undercurrent that controls every behavior in the violent and corrupt world of a bitter and savage Montreal.
Posted by J F Norris at 9:35 AM