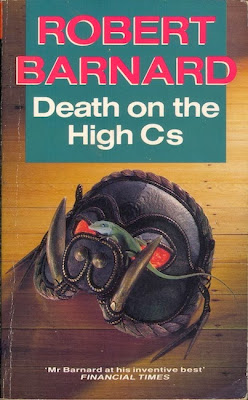 Gaylene Ffrench isn't bothered by typecasting. In the role of Maddalena in the Northern Opera Company of Manchester's latest production of Rigoletto she is relishing playing a vulgar prostitute. But if you ask her fellow cast members they'd tell you she's not acting at all.

The more we get to know Gaylene the more we see that she is loud, brash, rude and licentious. Between her promiscuous come-ons to every male member of the cast and her frequent insults hurled at the more talented female singers Gaylene has managed to make enemies of the entire company. They dislike Gaylene so intensely that when two attempts are made on her life they are not taken seriously. Especially when, in her constant grasping at any type of publicity, she runs to the newspapers rather than the police. However, when she dies bizarrely via an electrified doorknob outside her dressing room the opera company must reassess those previous accidents and start looking for a murderer among themselves.

Death on the High C's (1977) was Robert Barnard's third detective novel. He has a field day satirizing the many vain and egotistical performers so often lampooned in novels about opera singers, but he is also highly knowledgeable about the world of opera. As is the police detective Superintendent Nichols who at first plays dumb about the music in order to catch the cast and crew off guard. If there is anything to criticize it is an assumption on Barnard's part that his readers are as expert in the world of opera as he is. As much as I dislike "info dumping" a little more background on some of the plots of the operas and composers would have been appreciated by a rookie opera fan like myself. I resorted to Google to help fill in the gaps that Barnard and Nichols and the Northern Opera Company omitted. 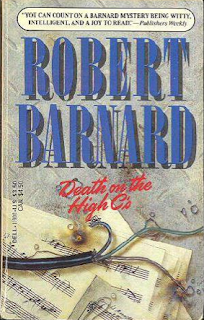 The writing is at times arch and ostentatious with a wry humor that on occasion made me laugh out loud. Every now and then the satirical touches are tempered with moments of quiet drama as in the scene when we learn that the singer playing Rigoletto is taking care of a severely disabled young girl in his home, a fact he'd prefer to keep very private. For the most part though this early Barnard mystery novel is less somber than some of his later books. His wit and clever plotting reminded me more of Christianna Brand than Agatha Christie who he greatly admired.

Today is a salute to the recently departed Robert Barnard. For more about his wonderful detective novels and crime fiction please visit Patti Abbott's blog where you will find links to the other contributions for Fridays Forgotten Books.