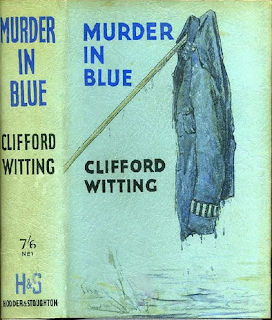 "He's deep, is the Inspector."

John Rutherford, bookseller and sometime fiction writer, discovers the bludgeoned corpse of a policeman one evening while taking a stroll in a rain storm. The policeman's overturned bicycle is what first catches Rutherford's eye. Then he sees Officer Johnson's body sprawled on the sodden ground of Phantom Coppice. Rutherford takes Johnson's bike and pedals to rural Paulsfield police station, two miles away, to report the crime. There he finds Sgt. Martin who initiates calls to a doctor, a photographer and Inspector Charlton. Among the oddities in the case are the mystery of the bicycle tire puncture, the possibility of switched bicycles, the appearance of a third cop on the scene, and the strange location of Johnson's policeman's hat at the scene of the crime.

Rutherford is narrator and wanna-be amateur sleuth who aids Charlton in the investigation of the crime. But it is not these two lead detectives who are the most interesting characters of the book. That honor goes to 19 year-old George Stubbings, assistant at "Voslivres," the bookshop Rutherford owns. George is a detective story addict and he is keen on solving the various mysteries surrounding Johnson's violent death. He is both ingenuous in dealing with Rutherford and ingenious in his precocious observations about the apparent murder. Whenever George sets foot on the scene the book gets a welcome humorous lift.

To be truthful the entire book is more lighthearted than one would expect for a story about the beating death of a policeman. It's one of the many examples of how a detective novel can also be a good mainstream novel. The detail about life in a village bookshop and how Rutherford and George treat their customers is a highlight. At times I was reminded of the work of Herbert Adams who, like Witting does here, adds a romantic subplot and populates his books with fully realized minor characters who tend to upstage the detective leads. There is an abundance of charm and wit on display in Murder in Blue amid the brutal violence.

The detection is mostly fair play, but several clues withheld from the reader and revealed in the final pages are clearly not. The solution, sadly, leaves a lot to be desired. In an attempt to make the mystery more realistic Witting has chance figure prominently. Rutherford in acting as Good Samaritan inadvertently ruins what was intended as the murderer's perfect frame-up. The bad weather, the available bicycle, and several other plot details all combine with Rutherford's split second decisions to create unnecessary complications that hinder the murder investigation. But the reader is not really aware of these complications until the final chapter. That will make for cries of "Cheat!" among the more rigid detective fiction fans.

According to several reviews I have read elsewhere -- notably those by Nick Fuller at the Golden Age of Detection wiki -- Witting improved over time. Catt Out of the Bag, Witting's fourth mystery novel, receives the closest thing to a rave from Nick. I've been looking for an affordable copy of that title for several months now. His Measure for Murder, set in an amateur theatrical troupe, was chosen as one of Jacques Barzun's "Fifty Classics of Crime Fiction" and reprinted in a library edition back in the 1970s. 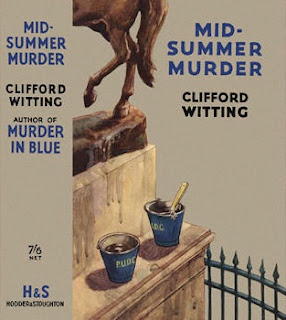 READING CHALLENGE UPDATE: This number three in my "Vintage Mystery Reading Challenge 2013 - Scattergories" sponsored by Bev at My Reader's Block. The book fulfills the category Jolly Old England. Previous reviews for the challenge are listed below:

Category 1: Murder is Academic
Murder from the Grave by Will Levinrew
Category 2: Colorful Crime
The Woman in Purple Pajamas by Willis Kent
Posted by J F Norris at 3:57 AM