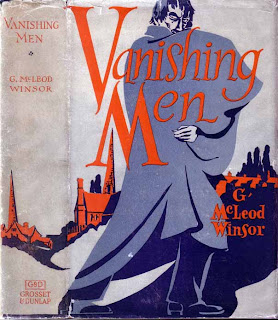 Looking at the table of contents and reading the chapter titles I learned that Vanishing Men (1927) promised five disappearances and a laboratory explosion. Good enough for me. I plunked down my money and bought the book. I was hoping for something along the lines of the scientific impossible crime novels of Nigel Morland under his many pseudonyms. Would this one involve esoteric chemistry experiments like the books featuring Johnny Lamb? Would I learn of mechanical or engineering problems as in the novels Morland wrote as Neal Shepard? Perhaps physics or biology would be featured. I was surprised when the story hinted at invisibility, matter disintegration and experiments with radioactive elements. The solution to the crimes seemed to be heading toward science fiction and fantasy rather than real hard science.

Prosaically titled The Mysterious Disappearances in the original UK edition the story takes the form of a detective novel opening with the theft of diamonds and gems from a jeweler's office and several apparent murders. The biggest mystery that plagues the several policemen from Scotland yard tackling the various crimes, accidents and vanishings is the fact that the victims' bodies cannot be found. Among the many baffling and inexplicable events the police face:
The primary suspect is Arthur Seymour, a reclusive misanthropic amateur scientist who lives next door to narrator Sir Henry Fordyce. Seymour has been conducting strange experiments with uranium and radium but will not go into details about the specifics of his work. Fordyce happens to be privy to Seymour's personal life and relates how a broken engagement and his one time fiancée's marriage to another man drove Seymour to the brink of madness. The man who stole Seymour's bride-to-be is also the jeweler who disappears at the start of the book. The police are determined to find a connection between all the vanished men and Seymour and thus prove a case of elaborate revenge. They, however, need some vital information from Miss Arnold, the adopted daughter of the jeweler's widow. Inspector Gilmour turns to Fordyce who he believes might more skillfully obtain Miss Arnold's cooperation. She has refused to talk with Gilmour who she finds a boor and Inspector Glynn who she found inappropriately friendly. Fordyce, a dignified middle-aged gentleman, is shocked when in the course of his sly interrogation he finds himself falling in love with the woman, fifteen years his junior.

The book has a somber often humorless tone thanks in large part to the extremely uptight Henry Fordyce as narrator. But the adventures and multiple puzzles keep the reader engaged. Only the introduction of the at times sappy love story subplot periodically detract from what otherwise is an intriguing mystery that soon becomes a science fiction adventure. In the final chapters Seymour's experimental work is revealed to be an early form of quantum mechanics and particle physics. Fordyce finds himself rendering those experiments in very basic layman's terms in an attempt to convey the often difficult mathematics involved which he confesses he does not understand at all. 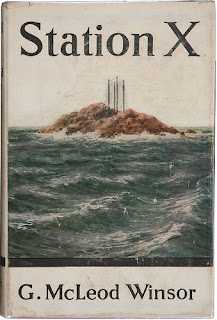 George McLeod Winsor, apart from sounding like a character found in the pages of a Stevenson novel, was a little known scientific romance writer from the early part of the 20th century. His best known work -- thanks to its inclusion in 333, a bibliography of fantasy, science fiction, lost race and supernatural fiction -- is his novel Station X (1919). The book is a bizarre tale of interplanetary warfare between Mars and Earth. I have not read the book but the plot summary in 333 certainly makes it seem like a War of the Worlds knock-off with the added bonus of alien mind control. But then there are dozens of books published between 1890 and 1920 about evil Martians invading Earth taking all sorts of forms from bat winged humanoids to metal encased tentacled machines. Though no aliens are involved in the mysterious events in Vanishing Men the solution depends on something just as fantastical as Martians or Venusians.
Posted by J F Norris at 7:17 AM